Turkey to overcome economic challenges on its own, Erdoğan says 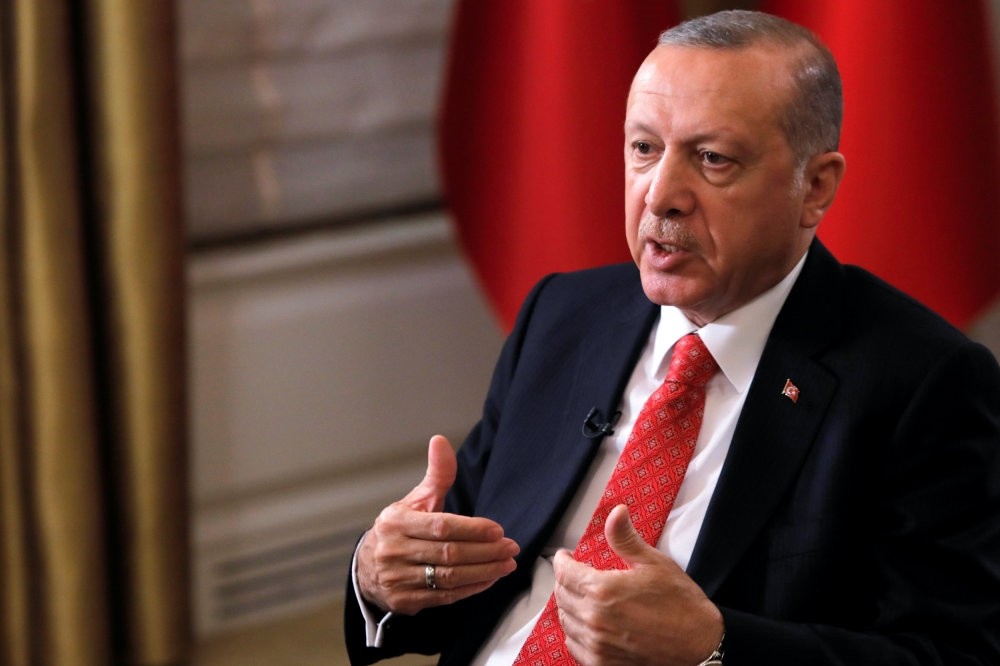 President Erdoğan stressed that Turkey will resolve current economic challenges by mobilizing its own resources and U.S. pastor Andrew Brunson's case was not related to the country's economy in any way

President Recep Tayyip Erdoğan emphasized that the current economic challenges have been exaggerated more than necessary and Turkey will overcome these challenges with its own resources, in an exclusive interview with Reuters on the sidelines of the U.N. General Assembly in New York.

The president, responding to allegations, stressed that the case of pastor Andrew Brunson which had led to tensions between Turkey and the U.S. in August was not even closely related to Turkey's economy.

In an article published on Monday, the Wall Street Journal, citing anonymous U.S. officials, stated that the Trump administration, which demanded the pastor be released immediately this summer, decided to ease its pressure campaign amid fears that Turkey's economic difficulties could spread to other emerging markets.

Over the last couple of months, Turkey has seen high volatility in its currency and running inflation, since July the country has started to take measures against these problems and has since laid out a comprehensive new economic program to fight problems and bring about a transformation in the country's economy.

Due to the currency volatility, the Turkish lira has lost more than 40 percent of its value since the beginning of this year and the better part of this depreciation occurred in August when U.S. President Donald Trump openly targeted the Turkish economy and authorized a doubling of duties on aluminum and steel imports from Turkey on August 10 along with imposing sanctions on two Turkish ministers. Turkey retaliated by increasing tariffs on U.S. cars, alcohol and tobacco imports.

Facing terrorism charges due to his alleged links with the Gülenist Terror Group (FETÖ) and U.S.-designated terrorist organization PKK, Brunson is currently under house arrest in the western province of İzmir and is due to stand trial on Oct. 12.

In order to curb inflation and depreciation in its currency, the Central Bank of the Republic of Turkey (CBRT) raised its benchmark rate by a 625 basis points on Sept. 13, boosting the lira.

Commenting on the CBRT's move, Erdoğan told Reuters, "It shows the central bank is independent. As the president, I am against high interest rates and I am repeating my stance here again," he said, adding that high rates primarily scare away investors.

"This was a decision made by the central bank... I hope and pray that their expectations will be met because high rates lead to high inflation. I hope the other way around will happen this time," he added.

The lira firmed slightly yesterday morning, after the president's assurance on the independence of the central bank was published.

Last week, Turkey launched new medium term program which outlined the government's macroeconomic forecasts for the period of 2018 to 2021 and guidelines to achieve them.

As part of this plan, the government also aims to manage the private sector's debt, which was largely borrowed in foreign currency and has become difficult for corporations to pay due to currency volatility. The long-term debt of the private sector is calculated at $221 billion by the central bank.

On Sept. 19, Turkish banks and financial institutions signed a loan restructuring a framework agreement in order to help businesses having difficulty paying off their debts, Turkey's Banking Association (TBB) announced.

Although banks have been exposed to major debts, their capital adequacy ratio and liquidity performance are still solid. According to the data of the Banking Regulation and Supervision Agency (BDDK), the total net profit of the Turkish banking sector amounted to TL 33.5 billion ($5.48 billion) in January-July this year.

The Turkish government has already eased the rules on how banks report their non-performing loans, giving them more freedom to tolerate the companies' bad debts. Moreover, last week, talks about setting up a so-called "bad bank" that would assume the lender's non-performing loans were reportedly took place. These moves have recently given breathing space to the markets and mitigated investors' concerns as Turkish bonds rallied in September.

In the Reuters interview, Erdoğan also said Turkey will continue to buy natural gas from Iran in line with its long-term supply contract despite Trump's threats to punish countries doing business with Iran.

"We need to be realistic... Am I supposed to let people freeze in winter? Nobody should be offended. How can I heat my people's homes if we stop purchasing Iran's natural gas?" he said.

Trump pulled the United States out of a 2015 multinational nuclear deal with Iran and in August Washington reimposed sanctions on Tehran, which had been lifted in 2016. The U.S. sanctions on Iran's energy sector are set to be reimposed in November.