US economy grew at annual rate of 4.2 percent in Q2 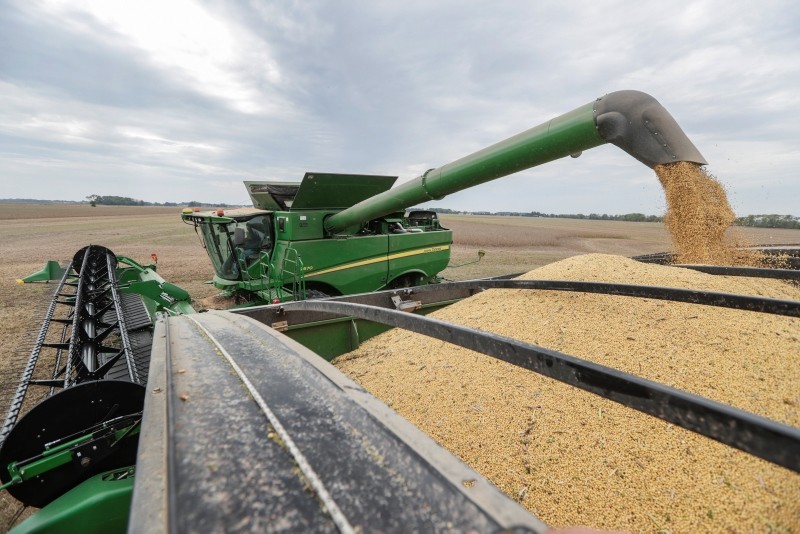 The U.S. economy grew at a robust annual rate of 4.2 percent in the second quarter, the best performance in nearly four years, though economists believe growth has slowed in the current quarter partly because of a drag from trade.

The performance of the gross domestic product, the country's total output of goods and services, was unchanged from an estimate the Commerce Department made last month, the government reported Thursday.

The strong GDP performance has been cited by Trump as proof that his economic program is working.

"We're doing much better than anybody thought possible," Trump said at a Wednesday news conference.

However, a big part of that growth reflected a temporary rush to ship soybeans and other U.S. exports out before penalty tariffs triggered by Trump's get-tough trade policies took effect.

Economists believe growth has slowed in the current quarter to between 3 percent and 3.5 percent, still a solid pace. While trade boosted GDP by 1.2 percentage point in the second quarter, due to a surge in exports, it is expected to trim growth by around 1 percentage point in the third quarter. Some of that weakness may be offset by businesses rebuilding their inventories at a stronger pace.

"Growth still looks quite strong," Jim O'Sullivan, chief U.S. economist for High Frequency Economics, said in describing the revised GDP report for the second quarter. He said he was forecasting third and fourth quarter growth at around 3 percent "before momentum starts to fade in 2019."

A 3 percent growth average in the second half of this year would leave the annual growth in 2018 at 3 percent. That would be the best performance since 2005, three years before the 2008 financial crisis pushed the country into the worst recession since the 1930s.

The country is currently in the 10th year of an economic expansion, the second longest in history. But growth has averaged a lackluster 2.2 percent, making this the weakest recovery in the post-World War II period.

Trump often noted that performance when he campaigned for president, blaming the weakness on Obama administration economic policies. He pushed a $1.5 trillion tax cut through Congress last December and has emphasized deregulation and vowed tougher enforcement of trade agreements as ways to boost growth.

The administration is projecting growth will return to sustained rates of 3 percent or better over the next decade. However, others disagree with that assessment, forecasting growth will slow sharply in coming years as the impact of the tax cuts and increased government spending this year begin to fade. There is also an expectation that rising interest rates from the Federal Reserve will temper growth.

The Fed pushed its key policy rate up for an eighth time on Wednesday to a new range of 2 percent to 2.25 percent.

As he has done recently, Trump criticized that move, but Fed Chairman Jerome Powell told reporters at a news conference on Wednesday that outside criticism would have no impact on the Fed's efforts to follow its mandate of promoting maximum employment and stable prices.

The Fed indicated that it planned to stick with its plan to raise rates one more time this year and another three times in 2019.

The government's third and final look at second quarter GDP showed only minor and off-setting changes. Consumer spending, which accounts for 70 percent of economic activity, was unchanged at a solid growth rate of 3.8 percent. Business investment grew at a strong 8.7 percent rate, up slightly from last month's estimate of an 8.5 percent growth rate.