Worst in inflation behind, Turkish gov't to announce new measures next week 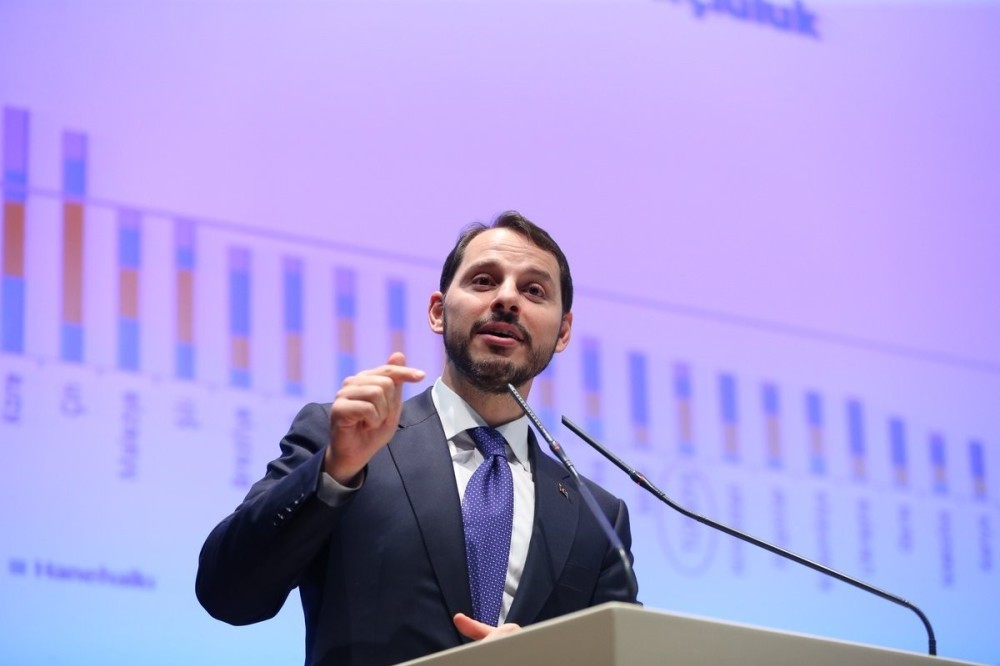 Treasury and Finance Minister Berat Albayrak will announce an expansive plan to fight inflation next week.
by Daily Sabah with AA
Oct 04, 2018 12:00 am

Inflation in September exceeded market expectations and hit nearly 25 percent. But the government next week will announce an expansive framework for a full-scale fight to ensure price stability

Treasury and Finance Minister Berat Albayrak stressed yesterday that Turkey has left the worst behind, referring to the September inflation figures announced at 24.52 percent by the Turkish Statistical Institute (TurkStat). It was the worst month in terms of expectations. Albayrak announced that the ministry will disclose next week a detailed framework to fight inflation. Evaluating the September inflation figures in an interview with the private broadcaster NTV, Albayrak said that the announced rate surpassed the expectations of the market and the Central Bank of the Republic of Turkey (CBRT). He noted that the inflation figures revealed that the effects of opportunism, stocking and speculative behavior were not just perceptual but real. "This means that we will be fighting more intensively with pricing tendencies," Albayrak stressed that with the New Economy Program (NEP), they have announced an all-out war on inflation.

"This week we will initiate one-to-one sectoral and group-based talks and announce the relevant framework to the public next week. This is important in terms of how seriously the issue should be addressed," he added. Consumer prices in Turkey increased 24.52 percent in September year-on-year, up 6.3 percent from the previous month, TurkStat data released yesterday showed. The consumer price index (CPI) rose 19.37 percent compared to last December and 13.75 percent on the 12-month moving averages basis. The figure in the month was up from 17.90 in August, TurkStat reported.

The consumer price index (CPI) rose 19.37 percent compared to last December and 13.75 percent on the 12-month moving averages basis. The figure in the month was up from 17.90 in August, TurkStat reported.

Inflation climbed for a sixth straight month, hitting the highest level in almost 15 years. The rise in September was significantly higher than market expectations. He emphasized that a speculative process was experienced first in exchange rates and that this was rebuffed, while another process was experienced and overcome in liquidity and within the banking sector in September.

The Turkish lira weakened to 6.0 against the U.S. dollar, a loss of 1.5 percent on the day after the data were released. The lira has lost over 37 percent in value against the greenback since the beginning of the year.

On a yearly basis, the biggest price hike was in furnishing and household equipment in September - up at 37.28 percent - and in transportation at 36.61 percent.

On a monthly basis, the consumer prices rose by 6.30 percent in September, as the highest monthly increase was 11.4 percent in furnishing and household equipment.

"With the steps, we have taken in this process, we have begun to receive signals that the process experienced in the economy for the past few months is not permanent and that we will walk with more concrete, realistic and safe steps by leaving the process behind," Minister Albayrak said.

Pointing to the positive developments in the balance of exports and imports and the balancing process, Albayrak said that a stabilization and better appreciation process has begun in exchange rates with the rebuff of speculative attacks. The minister added that as of this month, this process will follow a much stronger course with steps to be taken in Parliament as well as the structural reforms, agricultural monitoring committee, and a Wholesale Market Law.

Albayrak underlined that in the last few months the Turkish economy has seen political moves to improve its functioning and that this process is progressing towards normalization and improvement, stating that they have put forward a very effective process for the minimum damage to be experienced in the total balance sheet.

"We strived to make the NEP's 2018 and 2019 goals very rational and realistic. We see the targets as realistic not only until the end of the year but also in 2019," Albayrak said. "This balancing and recovery in October, November and December will bring about a natural balancing in the basic parameters of the economy. We will see positive developments more in the coming period, rather than negative ones." Replying to a question on the all-out fight against inflation, Albayrak said they have fully initiated the pre-interview process with the stakeholders this week, and that they will continue in the coming days. "Next week, we will launch a process for pricing, discounting, taking responsibility and putting our hands under the stone together with the stakeholders," the minister said, stressing that an all-out fight is essential to achieve a much stronger and faster outcome in this process.

"We will hold separate talks with the stakeholders, especially with the sectors that affect inflation pricing and discuss the issues affecting the critical threshold with the sector and company representatives. We will probably announce to the public next week that this requires an all-out fight," Minister Albayrak added.

Commenting on the data, Halk Invest Research Director Banu Kıvci Tokalı said the inflation was much higher than the market expectation in September. "In the high monthly increase, we see that not only the accelerated food price increase but also the significant impact of the sharp rise in the exchange rate, as well as the durable consumer goods, had an effect," Tokalı said.

She also pointed out that commodity inflation, which reflects the exchange rate effect in a shorter period and more clearly, continues to be at the forefront in the annual inflation increase. "In the case of maintaining the current stabilization trend observed in the exchange rate, we expect the differences between both the goods-services inflation and producer-consumer inflation to shrink especially in 2019. Due to both the current course of inflation and the ongoing risks in the core inflation indicators, we do not expect any changes in the strong short-term stance, as stated in the CBRT's recent statements," Tokalı said.