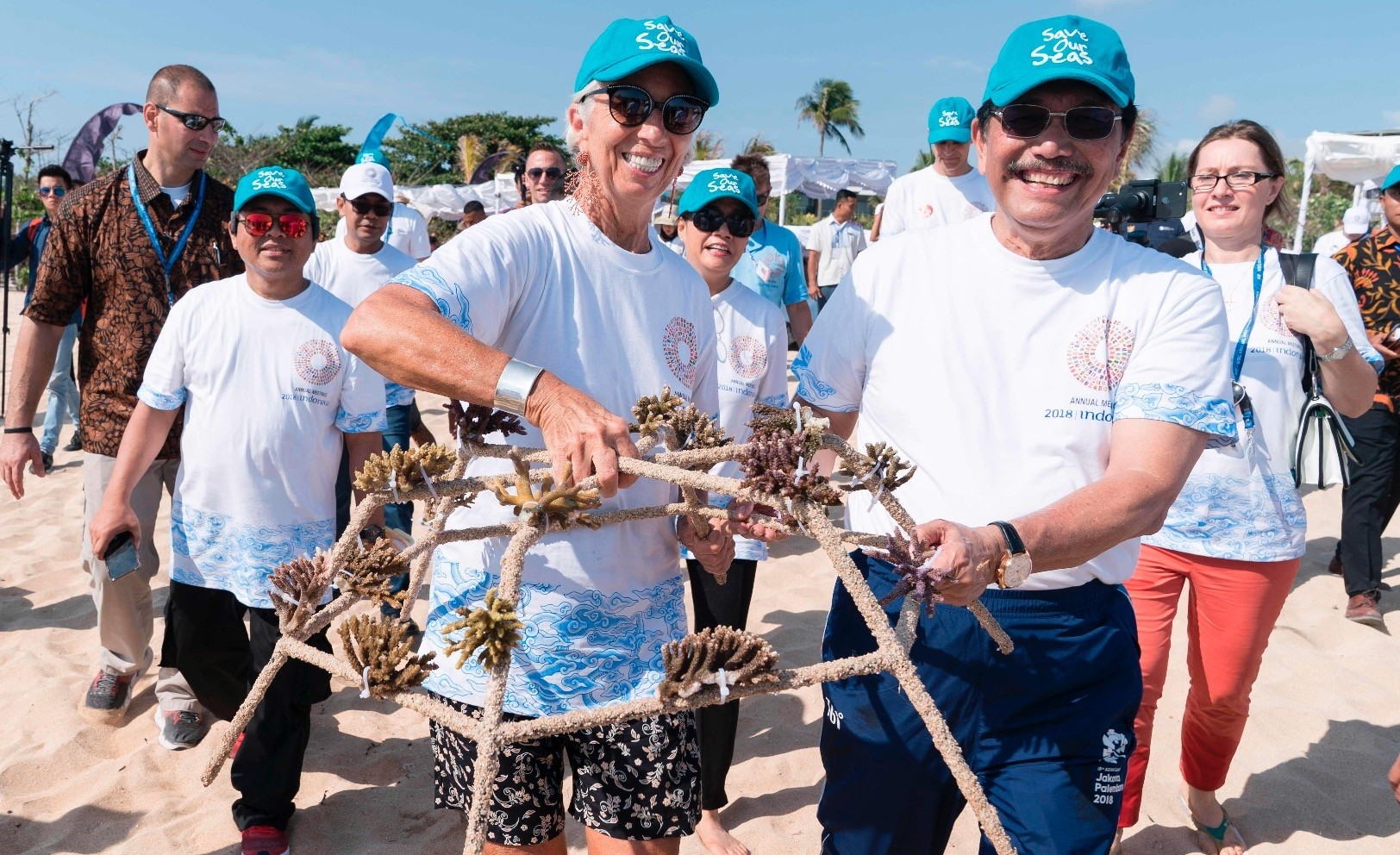 Lagarde (L) and Indonesiau2019s Maritime Affairs Minister Luhut Binsar Pandjaitan carry coral fragments to water where they will help rehabilitate the threatened coral reefs, ahead of the start of the 2018 IMF and World Bank annual meetings in Nusa Dua
by French Press Agency - AFP
Oct 08, 2018 12:00 am

The trade war launched by U.S. President Donald Trump against China, along with disputes with allies like the European Union, Mexico and Canada, is a key source of concern in IMF's annual meeting this week

Rising protectionism, vulnerable emerging markets and record debt levels: The International Monetary Fund (IMF) holds its annual meeting this week in earthquake-stricken Indonesia, as it shines a light on tremors in the global economy. Finance ministers and central bankers from 180 nations will be among 32,000 attendees in Bali for the annual meeting of the IMF and World Bank, which takes place every three years outside of Washington. The gathering will be held from Tuesday to Sunday. The resort island of Bali is 1,125 kilometers (700 miles) from Palu, the city on Sulawesi that wracked by an earthquake and tsunami on Sept. 28 that left more than 1,500 dead and 1,000 missing. Despite the distance, security is a major concern for Indonesian organizers. Bali experienced a series of volcanic eruptions over the summer, while the neighboring island of Lombok was struck by a string of deadly earthquakes. If there is an earthquake, Jakarta recommends participants stay in the conference center, which, like many hotels in Bali, is built to withstand such seismic events. In case of tsunami risk, attendees would be evacuated to a nearby building.

But the focus of the meeting is averting economic rather than natural disasters. The trade war launched by U.S. President Donald Trump against China, along with disputes with allies like the European Union, Mexico and Canada, is a key source of concern. The dispute caused a proliferation of protectionist measures in recent months that is weighing more and more on international trade. Trump has imposed tariffs on $250 billion of annual imports from China, to try to pressure Beijing to change trade policies he calls unfair, including theft of American technology. Beijing countered by imposing punitive duties on $110 billion of U.S. products. Washington also has imposed steep tariffs on steel, aluminum, washing machines and solar panels, drawing retaliation from Canada, Mexico, China and others.

Like the OECD, which lowered its economic growth forecast for the world economy to 3.7 percent for 2018, IMF chief Christine Lagarde signaled the fund would cut the outlook which in July stood at 3.9 percent. After sounding the alarm in recent years about threats to the global economy, Lagarde said last week "some of those risks have begun to materialize" and "there are signs that global growth has plateaued."

The rise in trade barriers is slowing trade, and dampening investment and manufacturing as uncertainty increases, she said. And she repeated the warning about rising debt levels which "reached an all-time high of $182 trillion - almost 60 percent higher than in 2007."

That creates concerns for emerging market economies which will come under increased pressure as the U.S. central bank raises interest rates, while investors are likely to pull out of those markets seeking higher returns. The fund recently increased support for Argentina by $7 billion to $57 billion in exchange for tough economic policy reforms, although the loan has not yet been approved by the IMF board.

But Economist Monica de Bolle of the Peterson Institute for International Economics said Brazil also was likely to see market turbulence next year and South Africa is vulnerable as well. "This is not going to end well," de Bolle said of the emerging market outlook.

There could be broader repercussions in the event China's economic engine slows sharply amid the trade confrontation. Group of 20 finance ministers also are due to meet in Bali on the sidelines of the IMF meeting to discuss topics such as US sanctions against Iran or taxes on digital giants. This will the last meeting prior to the leaders' summit in Buenos Aires at the end of November.