Government, retail and banking sector to fight inflation together in Turkey's full-scale program 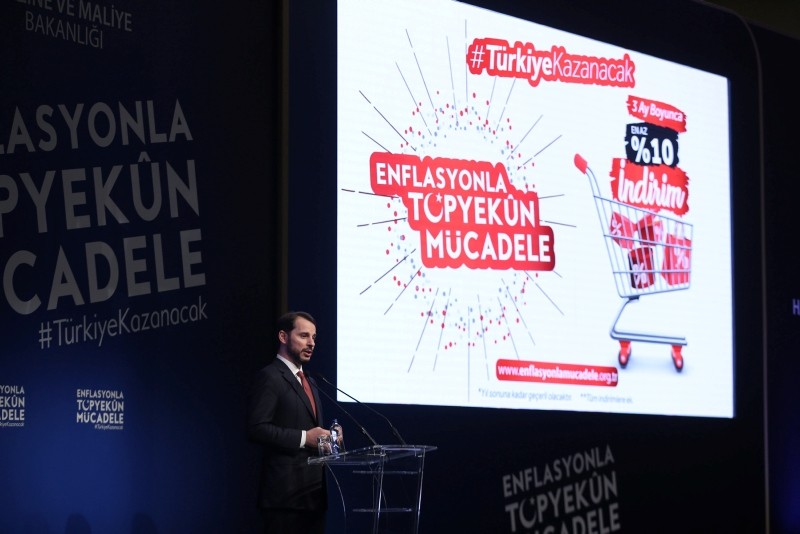 Turkey’s private sector, retailers and banks have agreed to cut the prices of goods by at least 10 percent across the board, Finance Minister Berat Albayrak said as he called on businesses to join the national struggle to tame rising inflation

Treasury and Finance Minister Berat Albayrak announced Tuesday an all-out program, backed by various sectors, to curb inflation and support businesses as well as consumers amid the running inflation and currency volatility.

The program offers price discounts in the retail sector, including food and textiles, no increase in electricity and gas bills and lowering interest rates for bank loans.

The program titled "Full-Scale Fight against Inflation" was presented in a program at the Istanbul Congress Center. Industry and Technology Minister Mustafa Varank, Labor, Social Services and Family Minister Zehra Zümrüt Selçuk and Agriculture and Forestry Minister Bekir Pakdemirli were also in attendance.

Minister Albayrak said that the public sector will be the driving force in the campaign. He added that there is a strong coordination in efforts between the Central Bank of the Republic of Turkey (CBRT), the Banking Regulation and Supervision Agency (BDDK) and Banks Association of Turkey (TBB).

Among the measures announced to curb inflation was a campaign of minimum 10 percent nationwide cut on prices. The participating companies would feature the campaign's logo on their products. A website was also launched for the campaign, which will be promoted with the #TürkiyeKazanacak (Turkey Will Win) hashtag on social media platforms.

The minister said that an active fight against stockpiling and opportunism will also be maintained.

Minister Albayrak also announced that there would be no increase in electricity and natural gas prices until the end of 2018 unless there is an issue on the global scale.

Meanwhile, to support businesses and maintain investments, the banks will decrease interest rates by 10 percent on loans issued after Aug. 1, Albayrak said.

The repayments of value-added tax (VAT) returns will be accelerated and concluded by the end of the year, he added.

Albayrak said that the process to change the market law in order to decrease the prices of groceries will be concluded this month and the bill will be presented to Parliament.

In September, inflation hit 24.52 percent on a year-on-year basis, up 6.3 percent from the previous month, according to the Turkish Statistical Institute (TurkStat). Inflation climbed for a sixth straight month, hitting the highest level in almost 15 years.

He suggested that the measures announced today by Minister Albayrak will have a strong impact on the economy to combat inflation and ensure price stability.

"Some significant tasks fall upon all sectors and even all segments of the society in order to ensure the success of the program. As exporters, we are aware of this and we will continue to fulfill our duties with a great determination from this day onward, as we have done so in the past," Gülle said.

Sabancı Holding, one of Turkey's largest conglomerates, said that in order for macro measures to be successful against inflation, all the stakeholders of the economy need to act in cooperation with a constructive approach and shared wisdom.

"In order to support mobilization of the fight against inflation and curb inflation, we will make the necessary discounts in the sale of our products in non-regulated sectors. We hope to see the positive implications of this approach on both macro and micro economic indicators as soon as possible. As we have done so many times in the past, we believe that we will once again leave behind the troubles by acting in unity and solidarity," Sabancı Holding said in a statement.

D&R, one of Turkey's leading retail brands that gather culture, art and entertainment under one roof, will support the government's all-out fight against inflation with its more than 200 stores across Turkey.

The retailer, owned by Daily Sabah's parent Turkuvaz Media Group, will offer attractive reductions in hundreds of products, including books, electronic goods and toys, on its website and at stores.

D&R General Manager Cem Eriç expressed his company's strong support for the government's anti-inflation program launched by the in cooperation with the Turkish business world.

"We are ready to take all responsibilities together with our government and the business world. We want our customers to preserve their purchasing power and offer them products like books, movies and entertainment that enrich their lives," he said.

Eriç referred to the retailer's book fair where they offer huge discounts to encourage reading. D&R also provides convenient payment offers thanks to some special agreements with different banks.