Turkey eyes broader cooperation with Hungary to expand into Europe 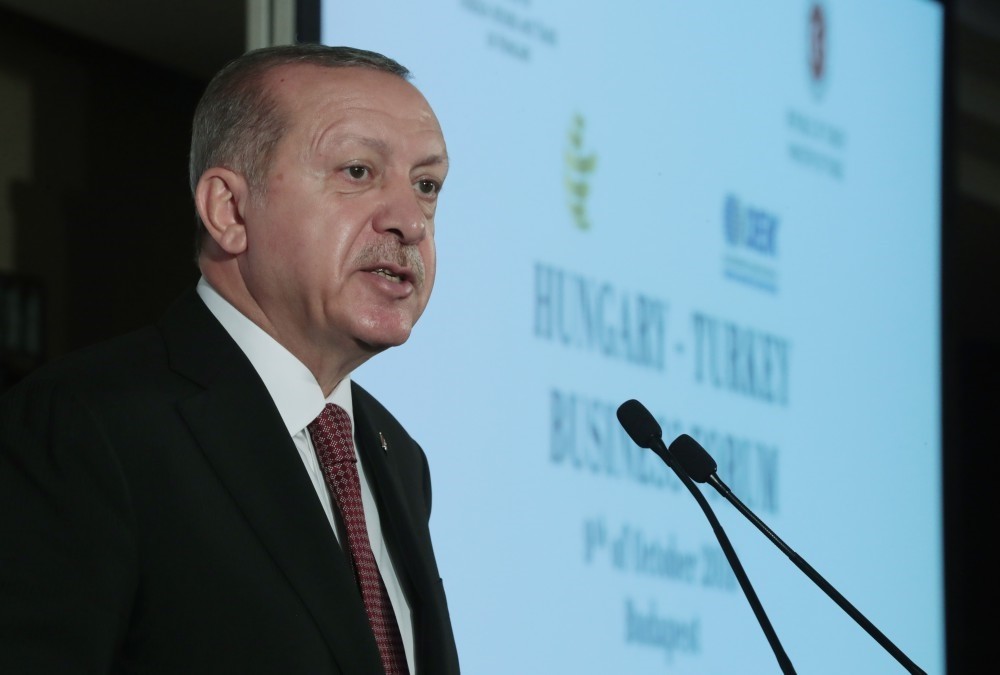 Through enhanced cooperation with Hungary, a key gateway to European markets, Turkey aims to cement its trade and investment ties with the continent

In his address at the Turkey-Hungary Business Forum, Erdoğan recalled that the bilateral trade volume between Turkey and Hungary reached $2.6 billion in 2017. This figure, he said, stood only at $1.5 billion in 2009. In the first eight months of the year, the trade volume between Turkey and Hungary recorded an 8 percent increase compared to the same period of the previous year and reached $1.8 billion. The president recalled the common goal of reaching $5 billion in bilateral trade in a short period of time.

He also commented that the current situation of the economic relations between Turkey and Hungary is not sufficient, underlining that it is possible to expand them much further. "The trade between the two countries, which have no political problems, has completed their legal infrastructure at the point of economic relations and have close ties historically and culturally, must be at higher levels," he added.

"Turkey does not see Hungary only a transit country from which it exports goods to Europe. We aim to reinforce our partnership by storing its goods in Hungary and exporting them to European countries via warehouses in the country," Erdoğan remarked.

Noting that they have achieved a tremendous relationship and momentum in Turkish-Hungarian relations, Erdoğan recalled that they paid a high number of high-level visits between the two countries, adding he visited Budapest twice in 2005 and 2013 during his time as prime minister.

Erdoğan stated that they crowned the acceleration achieved in politics by holding the first meeting of the High-Level Strategic Cooperation Council during Hungarian Prime Minister Viktor Orban's visit in 2013, followed by the third council meeting in Turkey in June 2017, and that they would like to hold the next council meeting in Budapest next year.

"The bilateral ties between Turkey and Hungary have seen excellent development over the years. We will continue our cooperation with various committees. In the spring of 2019, we will hold the fourth meeting of the High-Level Strategic Cooperation Council in Budapest," the president said.

"I also make much of the establishment of the African joint working group. I would like to enter into joint investments in Africa with Turkish-Hungarian cooperation. In other words, with the collaboration and support of Hungarian Eximbank and Turk Eximbank, we have gained a very different infrastructure with the embassies that we have created in 41 countries at the moment, especially following the campaign we initiated after 2005," Erdoğan continued. "Of course, it is very important to rule over 54 countries here, and we can cooperate with Hungary in these countries. Africa has lots of expectations right now. We can call it a barren field, and it is possible to carry out many projects in all areas, such as agriculture, industry, health, tourism, infrastructure, and superstructure."

Erdoğan pointed out that Turkish companies have investments in many sectors in Hungary, such as logistics, tourism, energy and contracting.

"The loans provided by the Hungarian Investment Promotion Agency [HIPA] and the ease of visa for our businesspeople will undoubtedly expand our investments here," he said, while thanking the Hungarian government for their support to Turkish businesspeople.

ent and Support Administration (KOSGEB) and the Hungarian National Chamber of Commerce during this visit, Erdoğan said that despite the positive developments, the current situation of the economic relations between the two countries is not sufficient, underlining that it is possible to move this much further.

Speaking at the business forum, Orban said, "We consider Turkey economically stable. It has a very strong leader and government," stressing that the cooperation of these two countries, allies within the scope of NATO, provides successful results.

Noting that the potential in bilateral trade is "extraordinary," Orban said appropriate loans will be provided to companies operating through mutual Eximbanks.

Orban said the political language in the West has become aggressive for various reasons, including social media and immigrants. "The idea of global politics in countries is turning into national politics. There are very important changes, such as Brexit. Uncertainty in the Western world has a very active role in both business and politics," he added.

He stressed that the said uncertainties have affected political actors negatively. "Citizens in Europe are demanding safety and security. We, as Hungary, are also looking for our own way," Orban continued.

Explaining that they established the Hungarian model with the intent of increasing safety, peace, security, employment and wages, he said they aim to eliminate unemployment completely in the country.