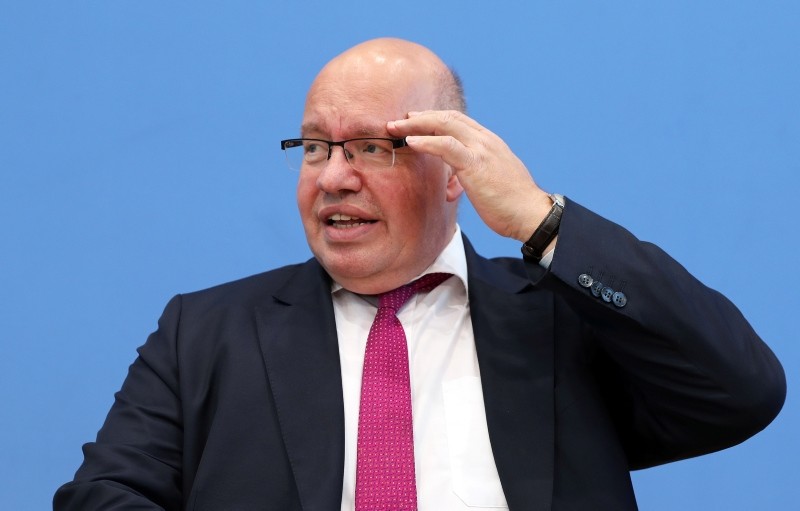 German Federal Minister for Economic Affairs and Energy Peter Altmaier gestures at the beginning of a press conference on the planned economic projection of the German Government for this autumn, in Berlin, Germany, Oct. 11, 2018. (EPA Photo)
by Compiled from Wire Services
Oct 11, 2018 12:00 am

The German government has cut its forecast for the country's economic growth this year to 1.8 percent from 2.3 percent, in part because of rising global trade tensions.

"An essential reason (for the cut to the forecast) is the weaker international trade environment," German Economy Ministry said, adding that a new emissions test cycle for cars had temporarily slowed production and exports in the vital sector.

Nevertheless, "the economy will enter the 10th year of growth next year — the longest upturn phase since 1966," Economy Minister Peter Altmaier said.

Berlin points to record low unemployment and rising wages as factors that should sustain economic expansion as companies invest and consumers spend more.

But "growing protectionist tendencies and international trade conflicts lead to uncertainty for the future," Altmaier said.

"We should reduce tariffs and barriers to trade, not build them up," Altmaier shot at U.S. President Donald Trump, who aims to shrink his country's yawning deficits in the name of his "America First" policy.

While the European Union has struck a shaky trade truce with Washington, Berlin slashed its outlook for growth in exports for 2018 by almost half, to 2.8 percent, with a smaller cut to the 2019 projection.

Altmaier said an escalation of tensions between the U.S. and Europe was averted, but "the underlying problems haven't yet really been solved" and U.S.-China tensions are affecting global growth.