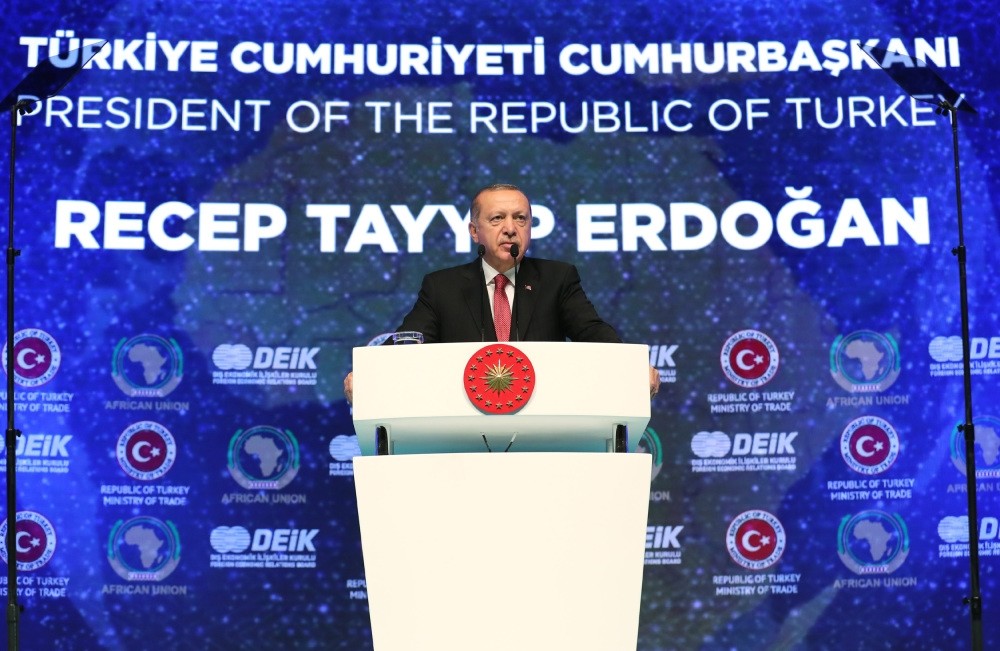 Organized by the Foreign Economic Relations Board (DEİK) in coordination with Turkey's Trade Ministry and the African Union, the 2nd Turkey-Africa Economy and Business Forum kicked off yesterday in Istanbul with the participation of President Recep Tayyip Erdoğan, Turkish and African businesspeople and ministers and politicians. The first day of the event saw significant opportunities for Turkey and African nations with new trade deals, while at the same time highlighting common steps to be taken to boost trade by ensuring limited exposure to currency fluctuations that have jeopardized many emerging economies this year.

President Erdoğan, in his address to African politicians and businesspeople, emphatically stated Turkey's efforts to exempt the economy from the risks of the high currency volatility in trade and called on African nations to start trading in national currencies. The president cited Turkey's intensified and accelerated efforts to boost the use of local currencies in trade transactions in the face of the recent volatility in the currencies. He said that the Turkish government has made remarkable progress in negotiations with leading trade partners like Russia, China and Iran.

President Erdoğan underlined the importance Turkey attaches to its cooperation with Africa, and said: "We want to improve our relations, built on mutual respect, in all areas on the basis of win-win and equal partnership. Since we took office, we have been working in this spirit in order to strengthen our cooperation with the whole of Africa without any discrimination." Turkey declared 2005 the African year and accelerated the pace of its ties with the countries in the continent. In 2002, Turkey had only 12 embassies across the continent – the number today has increased to 41. Likewise, African nations have also increased the number of diplomatic missions in Turkey from 10 to 33 over the last 16 years.

In his speech, President Erdoğan also highlighted the Hungarian interest in forming a partnership with Turkey to participate in projects in Africa. During his recent visit to the Hungarian capital Budapest, Erdoğan met the country's businesspeople with members of the Turkish business world in attendance. The Turkish and Hungarian Eximbanks will support any joint trade and investment project jointly carried out by the businesspeople of the two countries. Speaking to journalists on the way back from Hungary, President Erdoğan strongly emphasized that Hungarians are willing to engage in joint projects with Turkish partners in African countries. He stated that the Hungarian Eximbank provided 500 million euros ($576 million) for projects in the continent at the initial phase.

The value of Turkish investments in African countries was calculated at $6.2 billion while Turkish contractors have so far undertook 1,150 projects worth $65 billion. Turk Eximbank provides loans for trade finance and infrastructure projects in the continent.

Referring to the attitude of the West, President Erdoğan said, "They require you to define a single type of human rights, freedom and democracy in a social and political field."

He also noted that again according to the West, the only way of being involved in the global system is "for you to unconditionally accept that the fate of the world is imprisoned between the two lips of the five countries," referring to the five permanent members of the United Nations Security Council.

"If you ask them, those who came to Rwanda, those who made these massacres in Rwanda, are the most modern, most civilized countries in the world. Were they not condemned to pay the ultimate price of the problems arising from the system in a very heavy and painful way as it was the case in Somalia and the Central African Republic? In spite of all the suffering, do they have the right to say to our brothers anything about their destiny, their future?" President Erdoğan said.

The president emphatically stated that similar violence is also executed on the underground resources of African countries. "In order to prevent this injustice," he said, "Let us take common steps. Let us produce together and share. The exploiters do not allow the rehabilitation of the unjust order that is the legacy of the colonial period. This is the epitome of neocolonialism. This is the modern implementation of classical colonialism."

Speaking at the forum, Trade Minister Ruhsar Pekcan said Turkey aims to push Turkish-African relations to the next level despite global protectionist winds.

"Turkey and Africa's economic relations entered a golden era with Turkey's outreach to Africa that started in 2003," Pekcan told the Second Turkey-Africa Economic and Business Forum in Istanbul.

The two-day forum is being attended by 46 countries, three regional organizations, and eight credit agencies, she said.

Over the last 15 years, Turkey's trade volume with Africa quadrupled from $5 billion to over $20 billion, she added.

"Turkish investments in Africa exceeded $6.2 billion, and Turkish companies offer employment opportunities for hundreds of thousands of people on the continent," Pekcan noted.

A Turkish-African business meeting in Istanbul bore fruit Wednesday in the form of three new pacts with both private and public concerns.

Zimbabwe, Senegal, and the African Union all signed deals with parties in Turkey during the 2nd Turkey-Africa Economy and Business Forum in Turkey's economic hub.

The first agreement – a memorandum of understanding (MoU) – was signed by Senegal's Mines and Geology Ministry and Turkey's Tosyalı Holding for the company to invest in iron and steel in the West African country.

Another MoU was signed between Turkey's Trade Ministry and the African Union Commission for collaboration on trade and investment. The final trade cooperation pact was signed by the Turkish and Zimbabwean governments.