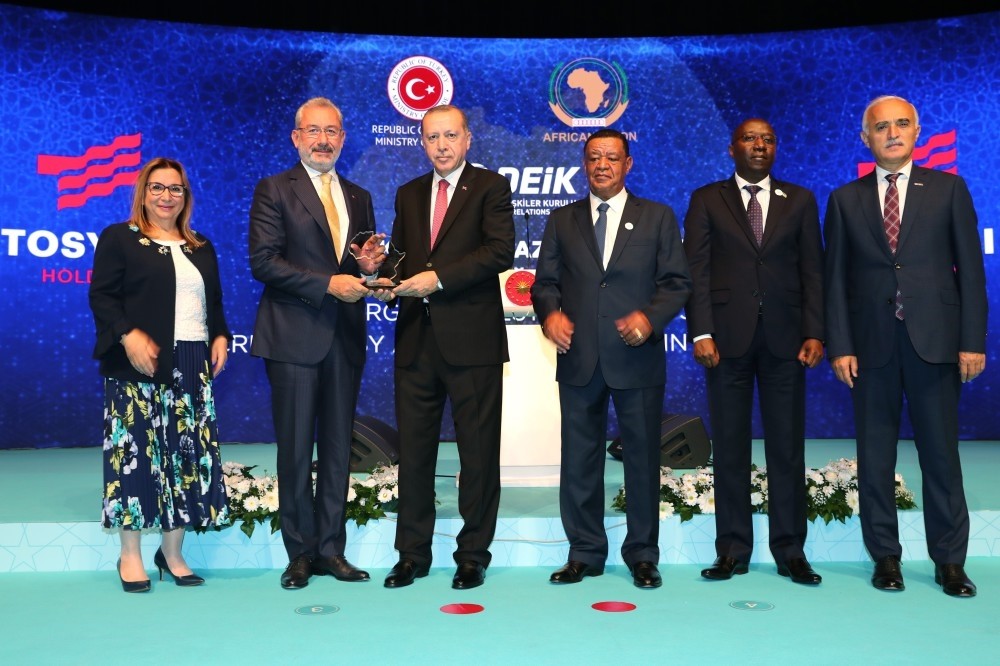 President Recep Tayyip Erdou011fan presents a plaque to Tosyalu0131 Holding Chairman Fuat Tosyalu0131 for the company's contribution to the Turkish-African economic partnership, at the Turkey-Africa Economic and Business Forum in Istanbul, Oct. 10.
by Miray Akın Oct 13, 2018 12:00 am

Turkey has been pursuing a multifaceted foreign policy in its ties with African countries and focusing on expanding economic ties, which has resulted in a threefold increase in trade volume with the continent

Following the end of the Cold War, the international system was replaced with a multipolar global order, and Turkey redefined its foreign policy as an active global actor accordingly.

Ever since, relations with Africa have constituted a significant part of Ankara's multidimensional foreign policy. The intensified diplomatic efforts have been coupled with business diplomacy and bolstered Turkey's economic ties with African countries. These strengthening economic relations have boosted trade volume threefold while increasing the number of projects undertaken by Turkish contractors.

In the past week, with contributions by the Trade Ministry and the African Union (AU), the 2nd Turkey-Africa Economy and Business Forum was held in Istanbul with the participation of President Recep Tayyip Erdoğan, businesspeople from Turkey and Africa, and politicians from different countries. The third edition of Turkey-Africa partnership summit will be organized in Istanbul in 2019,

Mahmut Önügören, executive committee member of Istanbul based Friends of Africa Association (TADD) and a founding partner of the investment company MON, which focuses on investing in agricultural, energy, industrial, retail and construction sectors, mainly in Africa, told Daily Sabah that the agreements between the Turkish government and African countries, and deals between companies operating in Africa will continue.

"Turkey exerts effort to strengthen its economic ties with Africa," he said, adding that three new agreements were signed, including a trade and economic cooperation agreement between Zimbabwe's government and Turkey during the 2nd Turkey-Africa Economy and Business Forum.

In a bid to enhance trade relations, Turkey is also planning to use local currencies in commercial exchanges with countries on the continent, the president said in his address at the summit.

Turkey's opening up to Africa, which dates back to the Action Plan adopted in 1988, took shape in 2005. Since then, the country has focused on comprehensive and long-term policies based on diversifying its relations with the continent. In that sense, the fields of agriculture, water resource management, rural development, health, micro-macro enterprises and security have played pivotal roles in Turkey's economic transactions with Africa.

The Turkish government declared 2005 the "Year of Africa." In that sense, Erdoğan, who was prime minister at the time, highlighted the economic potential between Turkey and African countries while speaking to reporters at Ankara's Esenboğa Airport prior to his visit to Ethiopia at that year.

In a reciprocal move, the AU declared Turkey its strategic partner in 2008, and relations between Africa and Turkey gained momentum when the first-ever Turkey-Africa Cooperation Summit was held in the commercial capital Istanbul with the participation of representatives from 50 African countries that year.

Supporting the continent in the economic sphere to fend off the difficulties that the African countries have encountered in terms of trade and investment, Turkey has made a financial contribution of $1 million to the AU since 2009 and opened Commercial Consulates in 26 African capitals. The establishment of the business councils by the Turkish Foreign Economic Relations Council with 19 sub-Saharan countries allows for strengthening the economic partnership between Africa and Turkey.

In accordance with the efforts to establish a contractual basis for the mutual economic relations, Turkey signed trade and economic cooperation agreements with 38 African countries. Stressing that the relations between Africa and Turkey have been developing consistently since 2005, Önügören said, "Turkey has opened 41 embassies throughout the continent; correspondingly, the trade volume has been also increasing."

Turkey's trade volume with Africa steadily increased more than threefold as it was only $5.4 billion in 2003 and in 2015, the volume exceeded $17.5 billion.

Turkish exports to Africa mainly consist of processed food, iron, steel, construction materials, electronic devices and apparel. In turn, Turkey's imported items from the continent includes oil, raw materials, minerals and gold. Gürkan Kaya, a finance manager from MNG Orko, a mining company that operates in Africa to produce gold, however, stated that, "We are just beginning to develop our relations; we need to make more agreements with African countries."

According to information shared by the Economic Community of West African States (ECOWAS), the share of African countries in the overall international business volume of Turkish contractors is around 21 percent, while the share of North Africa is 19 percent; and Turkish contractors have so far undertaken over 1,150 projects in Africa, which are worth $55 billion.

Taking this into account, Kaya stressed that, "Because Africa has a large number of natural resources, investors want to do business here; the potential of Africa is very high."

Additionally, according to a report by the Turkish Foreign Ministry published in October 2015, Turkey's investments in Africa generated 16,593 jobs in 2014 throughout the continent. Moreover, Turkey has seen an influx of African students studying in the country thanks to scholarships provided by the government or through bilateral education agreements with African countries. In this regard, the number of scholarships granted for the education of African students has substantially increased.

Furthermore, Turkish Airlines (THY) flies to 48 destinations in 31 African countries and as a result of these direct flights, cultural and social exchanges have intensified between Turkish and African communities.

In the past few decades, humanitarian aid has been one of the prominent elements in Turkey's African policy. As Turkey has become a leading country in the continent in terms of humanitarian issues, according to the Global Humanitarian Report 2018, Turkey was ranked the top country for humanitarian aid spending. In 2013 and 2014, Turkey also become the third-largest donor in the world. Accordingly, in 2014, regarding the contribution of nongovernmental organizations in the areas of education, health and capacity building, Turkey disbursed $3.3 billion to Africa, which closely corresponds to 0.42 percent of its gross national income.

As a part of Turkey's developmental aid to Africa, the Turkish Cooperation and Coordination Agency (TİKA) currently operates in the continent through 15 program coordination offices and with the help of these offices, technical assistance is provided to African countries.

Along with the activities of TİKA, Turkey also works with international humanitarian organizations, including the World Food Program (WFP) and the World Health Organization (WHO), to provide humanitarian assistance to Africa.