US budget deficit surges to $779 billion, hitting highest level since 2012 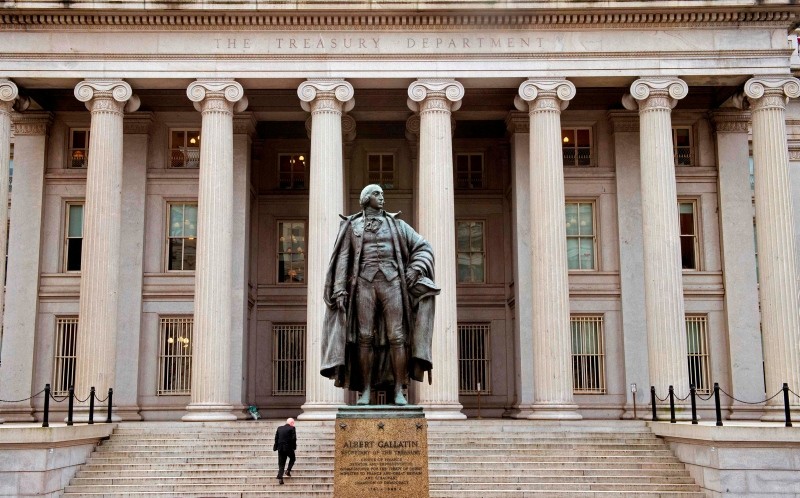 In this file photo taken on January 24, 2017 a man enters the US Treasury Department building on Pennsylvania Avenue in Washington, DC. (AFP Photo)
by French Press Agency - AFP
Oct 15, 2018 12:00 am

The U.S. budget deficit hit a six-year high of $779 billion in the most recent fiscal year, the Treasury announced Monday, underscoring the cost of last year's sweeping tax cuts.

That sent the deficit up 17 percent, or $113 billion, to its highest level since 2012, according to the Treasury report.

The deficit also grew as a share of the economy, rising to 3.9 percent of GDP, up from 3.5 percent in the 2017 fiscal year, the report showed, putting it well above the 3.2 percent average of the last 40 years.

But with GDP expanding by 4.2 percent in the second quarter of the year, the White House is banking on faster growth to pay for December's tax cuts.

So far, however, the trend is pointing in the opposite direction, according to the budget report.

The White House blueprint issued in February for the 2019 fiscal year also abandoned the long-held Republican goal of balancing the budget within a decade, instead projecting deficits into the foreseeable future.

Economists likewise say the aging population will strain the Social Security system, adding to pressure on the deficit over time.

The Senate in June blocked White House efforts to cut billions from conservation and children's health programs. And the administration sharply increased military spending in the past year.

Top White House economic adviser Larry Kudlow has suggested in recent weeks the administration may pursue spending cuts in social programs -- something Democrats say will mean reducing the safety net for health care and retirement for the poor and elderly.

"President Trump and this administration will continue to work with Congress to make the difficult choices needed to bring fiscal restraint," Mulvaney said in a statement.

Ahead of next month's hard-fought mid-term elections, in which control of the House of Representatives hangs in the balance, Republicans have largely avoided campaigning on the tax cuts.

The non-partisan Committee for a Responsible Budget said Monday that America's financial imbalances were "no longer a problem for the future."

"This year's deficit amounts to $6,200 per household and is more than we spend each year on Medicare or defense," Maya MacGuineas, the committee's president, said in a statement.

Total receipts increased only slightly, in part due to higher tax payments from self-employed individuals, but those were more than offset by "lower net corporation income tax receipts," which fell 22 percent, Treasury said in a statement.

Government outlays rose $127 billion, with the biggest increase from the Treasury Department, largely due to debt servicing costs.

Total government borrowing increased by $1 trillion in the latest fiscal year to $15.75 trillion, including $779 billion to finance the deficit.

Interest expense on government debt increased 14 percent or $65 billion due to the higher debt level as well as rising interest rates, a Treasury official told reporters.