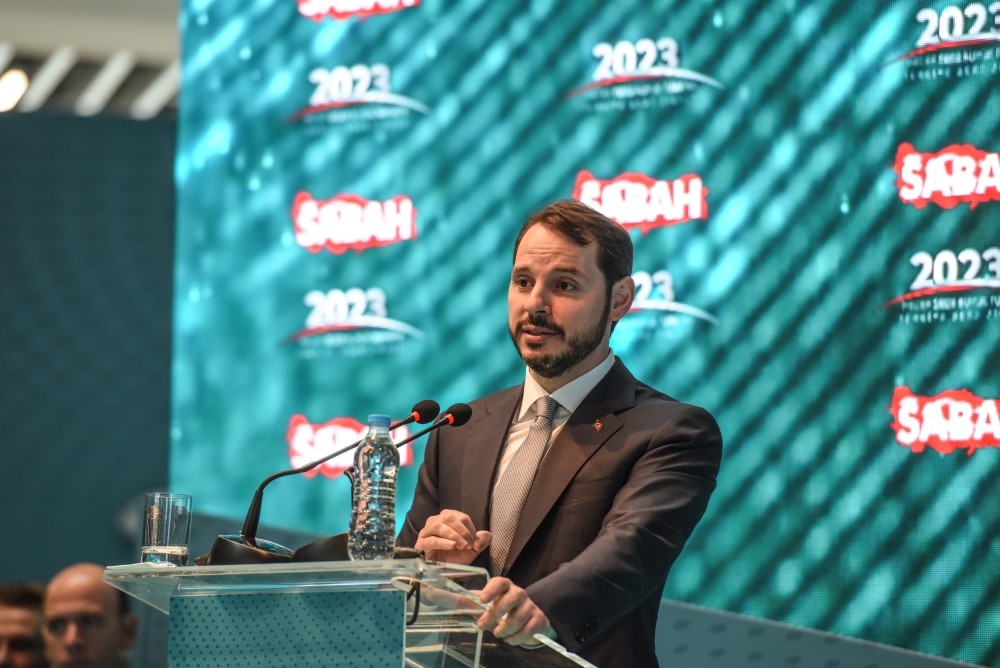 Treasury and Finance Minsiter Berat Albayrak delivers a speech at the opening ceremony of ,Vision 2023 Great Turkey Summit, in Istanbul yesterday.
by daily sabah
Oct 16, 2018 12:00 am

The mobilization of the public and private sector in reducing consumer prices is expected to bring down inflation starting in October, according to Treasury and Finance Minister Berat Albayrak

Treasury and Finance Minister Berat Albayrak stressed that the Turkish economy will see inflation drop in the last quarter of the year as a result of the government's expansive efforts to mitigate inflation and economic rebalancing. In a bid to combat inflation, the Turkish government launched a campaign last week by recruiting the private sector and banks. Called the "Full-Scale Fight against Inflation," the program offers price discounts in the retail sector, including food and textile, no increase in electricity and gas bills, and lower interest rates for bank loans. Among the measures announced to curb inflation was a campaign for a minimum price cut of 10 percent nationwide.

To support businesses and maintain investments, banks will decrease interest rates by 10 percent on loans issued after Aug. 1, Albayrak said yesterday. According to the latest reports, more than 500 companies have so far joined the anti-inflation campaign. "In combating inflation, we will continue to maintain the downward trend with figures first in October and then in November and December, and we will collect the fruits of this fight together in the entire economy," he said. In September, inflation hit 24.52 percent on a year-on-year basis, up 6.3 percent from the previous month, according to the Turkish Statistical Institute (TurkStat). Inflation climbed for a sixth straight month, hitting the highest level in almost 15 years. October's inflation figures will be announced on Nov. 3.

"At the end of this process, which we started to support with structural steps, we will see together that we are saving our economy from two shackles called inflation and interest step by step," he added.

In his speech at the opening ceremony of "Vision 2023 Great Turkey Summit," the minister pointed to the importance of choosing the new airport as the venue for the organization.

The first phase of the new airport project will be inaugurated with President Recep Tayyip Erdoğan in attendance at the end of the month, Albayrak recalled, stressing that the project will be one of the clearest messengers of 2023 Turkey.

He pointed out that 2023 Turkey is a realistic and visionary target commissioned all together and approached step by step, not a trivial dream.

Albayrak indicated that in addition to the importance of economic policies and diplomacy, a week of various experiences and many different feelings was left behind, reminding that the Full-Scale Fight against Inflation Program was initiated last week.

The minister explained that following the calls made for all nongovernmental organizations, businesspeople, unions and the private sector to fight inflation, which is the most important pillar of the new economy program, all the voluntary support transformed into a mobilization.

He stated that everyone, from leading brands and retail chains of the country to the neighborhood grocery stores and stallholders, has stood shoulder to shoulder.

"As of this weekend, we saw posters with the logo of the fight displayed in many stores and shops. I'd like to thank everyone who supports the fight," the minister noted.

Albayrak recalled that they set out to attend G20, International Monetary Fund (IMF) and World Bank meetings in Indonesia immediately after the announcement of the Full-Scale Fight against Inflation Program, adding that they held one-on-one meetings with many global investment funds and bank managers. "We presented, told and explained the details of our new economy program in meetings with large participation," Albayrak said, underlining that the economic attack, which started in July and August in Turkey and continued in September, has begun to ease. "The confidence of investors and global players in our country continues to grow stronger each passing day. The whole world understands that if any other country had to face all the speculative attacks that Turkey faced, it would be in the midst of a huge crisis," Albayrak continued. "However, with the steps taken, the action plans realized against all these speculative attacks, a rational midterm program that correctly identifies the processes and the New Economy Program, Turkey has successfully put forth a process that will win the trust of each stakeholder."

He stressed that the downward trend has begun to manifest itself with the prevention of the volatility in the exchange rate. "Our people should have no doubt that this process will be strongly realized by growing stronger with the steps we have taken. We all witnessed that the balancing has begun following the foreign trade figures in the economy," the treasury and finance minister said.

Pointing to the recently announced data, he continued, "We talked to the trade minister about October's figures. 'October has started very strong; we are very likely to see a different record,' she said. I hope that October will reveal a very important point in terms of our year-end targets."

Albayrak said the latest figures strongly indicate that exports have increased and that balancing has begun.

Stating that the Turkish economy is focusing on projects that will permanently end the current account deficit and reduce foreign dependence, he said they are concentrated on ensuring the localization of imported intermediate inputs used in industry.

He added that urban legends have been destroyed one by one in the economy, noting that the prejudice of "As Turkey, we export based on imports. No matter how much it is regulated, we cannot restrain our imports," is becoming a thing of the past.

Albayrak indicated that Turkey has substantial incoming foreign exchange with tourism and overseas contracting jobs and it is possible for Turkey to enter the period of giving current surplus.