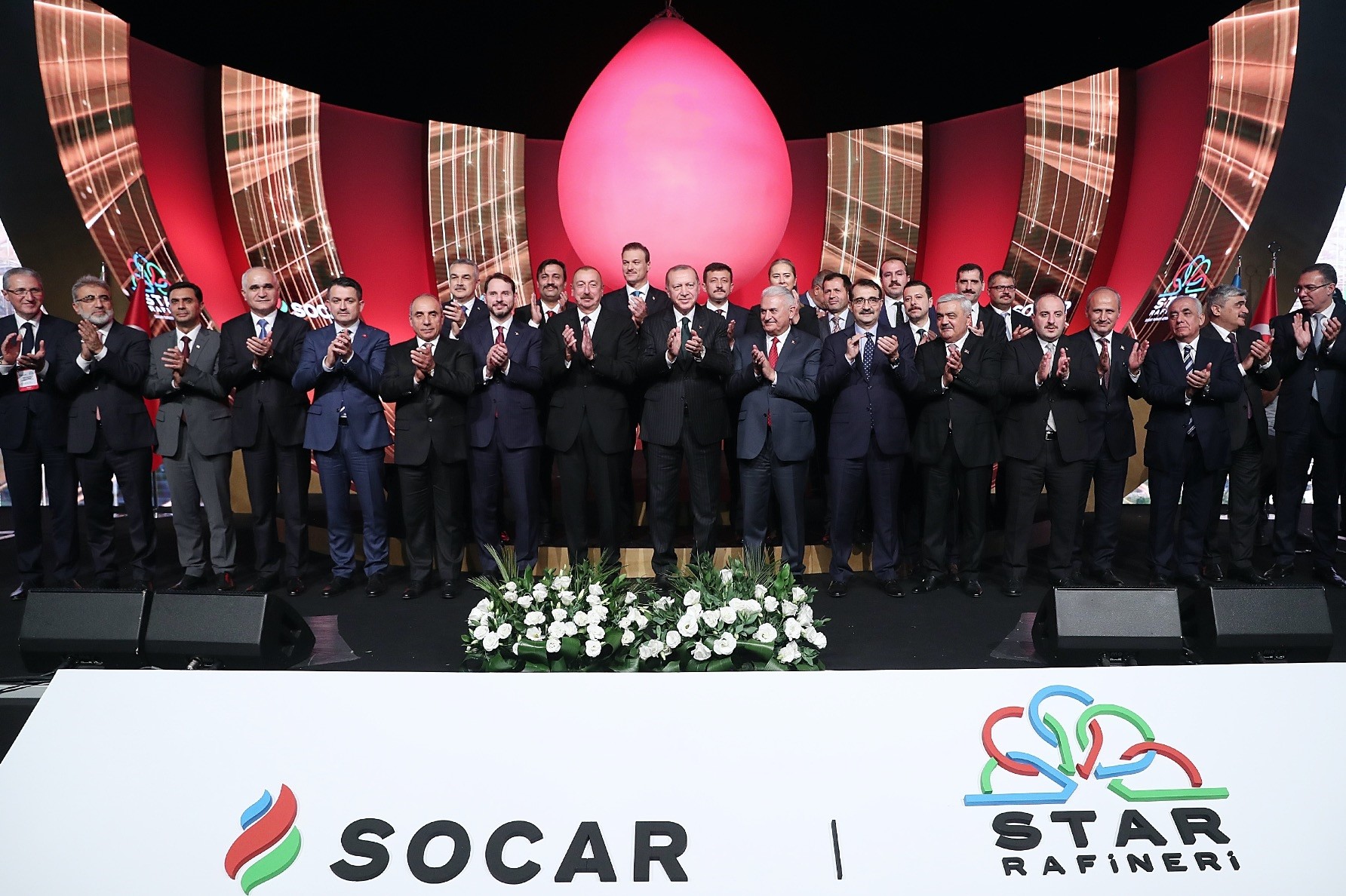 Azeri giant SOCAR's new oil refinery in İzmir is poised to further bolster ties between Ankara and Baku, with it also contributing significantly to the economy of Turkey, reducing its external dependence

Addressing the grand ceremony, Erdoğan said Turkey and Azerbaijan are taking brotherly ties, which already represent an example to the world, to the next level. President Erdoğan said every project that the two countries carry out together solidifies Turkey and Azerbaijan's status as regional powers. He said the $6.3 billion refinery will be one of the biggest petroleum and gas operations in Europe, the Middle East and Africa. Erdoğan touted the refinery's role in localizing industrial facilities in Turkey, saying, "It aims to save around $1.5 billion every year in imports of petroleum products and to reduce external dependence on petroleum products."

At this facility, which is also significant in terms of employment; some 1,100 people will be employed, he added.

The project has the feature of being the first "Strategic Investment Incentive Certificate" project in Turkey and is expected to reduce Turkey's annual foreign trade deficit by at least $1.5 billion.

The import rate of diesel will drop below 40 percent once the refinery reaches its full capacity. With 1.6 million tons of production, it will fully eliminate Turkey's need to import jet fuel. The refinery is also expected to reduce liquefied petroleum gas (LPG) imports to 70 percent from 80 percent. The STAR Refinery will meet more than 25 percent of Turkey's processed oil products needs upon startup. In 2018, refining of around 2 million tons of crude oil is expected at the refinery, which will increase to 10 million tons of crude at full capacity.

The refinery was built by SOCAR, which began investing in Turkey after it acquired the country's leading petrochemical company Petkim in 2008 for $2 billion. Construction at the refinery began in 2011.

The refinery will also produce 1.6 million tons of naphtha annually. Some 4.8 million tons of low-sulfur diesel that the Petkim refinery needs will also be produced at STAR. The refinery started its operations back on Aug. 3 with the arrival of the refinery's first crude oil cargo ship Absheron, loaded with 80,000 tons of feedstock.

During his speech at the ceremony, Aliyev hailed Erdoğan, saying Turkey became a major global power under his leadership.

Aliyev, who said they are preparing to carry out new important projects with Turkey, said the investment takes an important place in the history of Turkey and Azerbaijan. In his speech at the opening ceremony, Treasury and Finance Minister Berat Albayrak said that with the action plans they have implemented under the leadership of President Erdoğan and the New Economy Program (NEP) that was announced on Sept. 20, Turkey stands out as one of the countries that have displayed the most positive performance in the world in terms of macroeconomic indicators over the past month.

Expressing their excitement about the contribution of this major project to the reduction of Turkey's foreign dependence in this industry, as well as employment opportunities and the investment amount it will provide, Albayrak said, "Our excitement has increased a bit more today due to the reduction of the current account deficit, one of the leading goals in the New Economy Program, and meeting our high value-added production strategies fully."

Also speaking at a ceremony at the facility, SOCAR Turkey's CEO Zaur Gahramanov hailed Turkey as a strategic country for foreign investments for SOCAR. Gahramanov said that SOCAR has already invested $19 billion in Turkey.