Tech companies lead another steep sell-off in US stocks 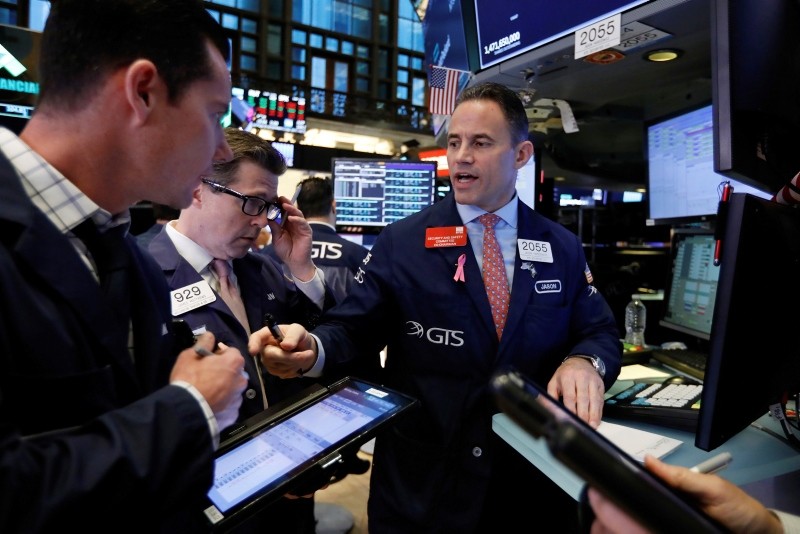 U.S. stocks veered sharply lower in late-afternoon trading Wednesday, sending the Dow Jones Industrial Average down more than 400 points and extending a losing streak for the benchmark S&P 500 index to a sixth day.

Technology stocks and media and communications companies accounted for most of the selling. AT&T sank after reporting weak subscriber numbers, and chipmaker Texas Instruments fell sharply after reporting slumping demand.

The tech-heavy Nasdaq composite is on track to end more than 10 percent below its August peak, putting it in what Wall Street calls a "correction." The Dow and S&P 500 have nearly erased their gains for the year.

THE QUOTE: "You've seen more discouraging (company) commentary this quarter than you have the last two," said Tom Martin, senior portfolio manager with Globalt Investments. "You're really starting to get more of a groundswell of caution. There's some concern about the fourth quarter and what that's going to look like."

EARNINGS SPREE: Investors were weighing the latest batch of company results in the busiest week of the quarterly earnings calendar.

S&P 500 companies are expected to deliver 22 percent earnings growth for the third quarter, with every sector except communications services, which includes Walt Disney, AT&T, Netflix and Google parent Alphabet, expected to show earnings growth, according to S&P Global Market Intelligence.

About 24 percent of the companies in the S&P 500 had reported third-quarter results as of Wednesday. Of those, 57 percent delivered earnings and revenue results that topped Wall Street's forecasts.

Even so, traders are concerned about future growth amid rising inflation, interest rates and uncertainty over trade. Some companies, including Caterpillar and 3M, have reported disappointing results and warned of rising costs related to tariffs related to the U.S.-China trade dispute.

Among the big companies slated to release quarterly results this week are Microsoft, Amazon and Colgate-Palmolive.

AT&T was among the big decliners in the media and communications sector, dropping 7.6 percent to $30.50 after the communication giant's latest quarterly results fell short of Wall Street's expectations.

TARIFFS TROUBLE: Shares in iRobot gave up 13.5 percent to $79.40 percent after the robotics technology company said tariffs will reduce its profitability in the fourth quarter.

DOES NOT COMPUTE: Texas Instruments fell 5.3 percent to $94.94 after the chipmaker delivered quarterly results that fell short of Wall Street's forecasts, noting that demand across most markets is slowing.

HOUSING SKID: The Commerce Department said sales of new U.S. homes plunged 5.5 percent in September, the fourth monthly drop. The report is the latest sign that the housing market is cooling amid rising mortgage rates. Several homebuilders declined following the release of the report. Beazer Homes USA slumped 6.9 percent to $8.57.

BOND YIELDS: Bond prices rose, sending the yield on the 10-year Treasury note down to 3.11 percent from 3.16 percent late Tuesday. The slide in bond yields came as traders sought out assets traditionally viewed as safe-havens.

Investors may also be betting that the Federal Reserve may elect to take a more measured approach to raising interest rates should the economy show more signs of slowing.

"That's been driving a good bit of the move in the 10-year lately, expectations about how many rate increases there are going to be in 2019," Martin said.

Many economists say they think growth will start to slow next year as the effects of last year's sweeping tax cuts and increased government spending begin to wane.