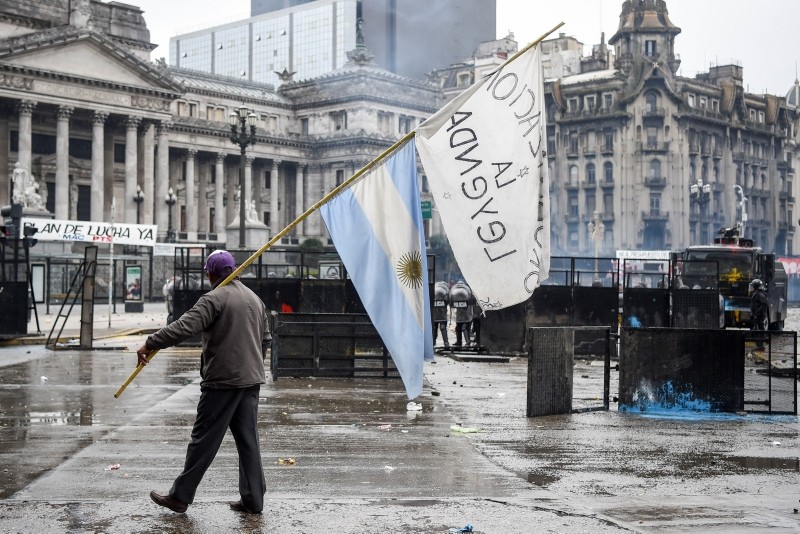 A demonstrator walks in front riot police carrying an Argentinian national flag outside the Congress while Argentine Deputies began the discussion on the governmentu2019s austere 2019 budget, in Buenos Aires, Argentina, Oct. 24, 2018. (AFP Photo)
by Oct 26, 2018 12:00 am

The International Monetary Fund executive board on Friday approved a $56 billion loan package for Argentina to help stabilize the crisis-battered country's economy.

The IMF said the approval released $5.7 billion to the government immediately.

The country secured a $50 billion IMF loan in June, and received $15 billion already, but Buenos Aires had to go back to the lender for additional support with faster disbursement.

With the latest installment, the IMF has released just over $20 billion to President Mauricio Macri's government.

Argentina's economic woes were brought on by a rapid loss of confidence in its currency from April.

The peso has lost around 50 percent of its value against the dollar since the start of the year, including 20 percent in a two-day period in August after Macri announced he was seeking to renegotiate the IMF loan.

He has since introduced hugely unpopular austerity measures, including halving the number of government ministries and restoring taxes on grain exports.

The IMF loan announcement came the day after Argentina's lower house of Congress passed an unpopular austerity budget, which now goes to the Senate where it is expected to win final approval.

The final pre-dawn vote came after a marathon, rancorous debate and a day of unrest that saw police fire tear gas and rubber bullets at demonstrators throwing rocks outside the legislature to protest a bitter cocktail of tax increases and spending cuts.

Macri has pledged to enact a swathe of cuts in health, education, science, transportation, public works and culture to the tune of $10 billion.

The budget deficit was 3.9 percent of GDP last year. The government aims to get it down to 2.7 percent in 2018 and zero by the end of next year.

Argentina's Finance Ministry has said the agreement with the IMF's executive board includes a commitment to maintain spending on social programs to more than 1.2 percent of gross domestic product in order to protect the most vulnerable sectors.

More than 27 percent of the population are listed as living below the poverty line and the South American country has an unemployment rate of 9.6 percent.

The IMF estimates the economy will contract by 2.6 percent this year with inflation of almost 32 percent.