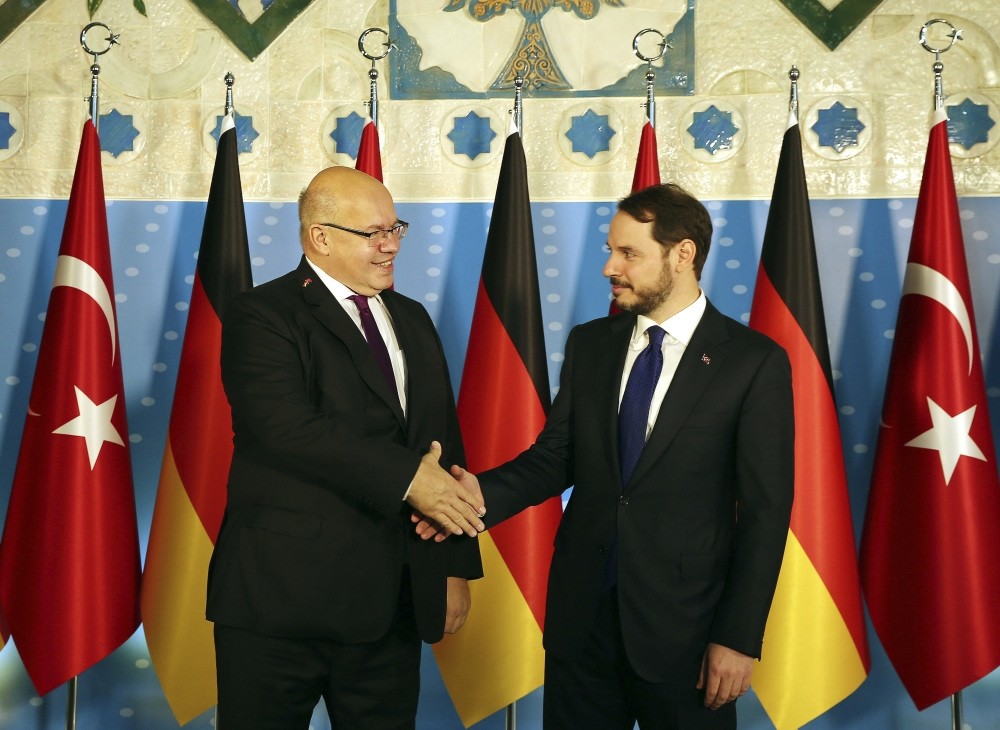 With strong political and economic ties dating back to the 19th century, Turkey and Germany look to benefit from more cooperation projects in the near future at a time of global trade conflicts and a disrupted economic outlook

In a global atmosphere of rising conflicts, particularly in economics, which is manifest in trade wars, Turkey and Germany look for new areas of cooperation and both countries are planning to announce new partnership projects in the near future. For nearly two years, Turkey and Germany had strained ties; however, the bilateral efforts of the two sides have resulted in a significant amelioration of the relationship because the two countries intend to expand economic cooperation supported by strong political will. The recent visit of German Economic Affairs and Energy Minister Peter Altmaier with a delegation of 80 people, consisting of 35 CEOs of big German conglomerates, has been a great step to cement bilateral ties in every possible area.

In an address during the joint press conference yesterday ahead of the Turkey-Germany Joint Economic and Trade Commission (JETCO) meeting, Treasury and Finance Minister Berat Albayrak said that in the meeting with German Minister Altmaier that they focused on areas to solidify the positive atmosphere in bilateral relations. "Germany is Turkey's biggest trade partner, and we want to reinforce our cooperation in every economic area. To that end, we are looking for partnership projects in third countries. We are currently negotiating a number of projects in energy, industry and transportation," Albayrak said.

Treasury and Finance Minister Albayrak announced that the German delegation would meet Turkish energy and industry ministers to evaluate the projects in question and sign a number of protocols. Some of the new partnership projects will be announced during today's meetings and more will come in the near future.

"We are now entering an era to announce strong collaborations," Albayrak said and added, "Turkish-German economic cooperation has far greater potential than the existing one."

The series of meetings today will contribute to ensuring stronger cooperation and increasing the bilateral trade volume.

Germany is the top destination for Turkish exports, making it Turkey's biggest trading partner. Bilateral trade between Turkey and Germany in 2016 totaled $35 billion. Turkey's exports to Germany amounted to $13.9 billion, while imports were $21.4 billion. Bilateral trade between the countries increased, reaching $36.4 billion in 2017, according to data compiled by the Turkish Statistical Institute (TurkStat).

During the January-September period this year, Turkey's exports to Germany rose to $11.8 billion, a 9.6 percent increase compared to the same period last year.

Minister Albayrak emphatically stressed that Turkey and Germany will evaluate the potential on the basis of a win-win principle as the two countries aim to make a strong contribution to distorted global economic perception through Turkish-German cooperation. Citing the nearly 200-year-old Turkish-German alliance, Albayrak said the cooperation between the two countries sets a global example.

"I believe that the strong economic ties will be supported by political developments in our relationship. We are expecting that this expansive economic cooperation will lead to strong political ties dominated by mutual understanding and common sense," Albayrak said.

German Economy and Energy Minister Altmaier recalled that the relations between the two countries had gone wrong through problematic periods in the recent years.

"We are still talking about some of the issues here, but we are committed to improving and developing our relations. We have an extraordinary foundation for economic cooperation. Currently, the number of German companies investing in Turkey is more than 7,500. There are many Turkish companies in Germany. These highly qualified companies are being managed by people whose roots are based on both sides," Altmaier said.

The German minister also emphasized that they are determined to continue their trade relations even in difficult times and indicated that they want to support small and medium-sized enterprises to be successful in the market. Thus, Altmaier said both countries want to create a well-structured institution on the basis of a common commercial commission.

He noted that they discussed new opportunities in terms of cooperation, adding that they also talked about what can be done to improve the framework conditions and encourage companies to invest more.

Altmaier stressed that energy is one of the top cooperation areas for Turkey and Germany. In addition to conventional and renewable energy, Turkish and Germany delegations will also discuss tourism, trade and new technologies. Altmaier highlighted that there is a strong political will for broader cooperation; thus, bureaucratic technicalities will be handled. When asked about the recent phase in the customs union, the German minister said he would discuss the issue with Trade Minister Ruhsar Pekcan. "This is a very difficult topic.

The European Union expects the fulfilment of certain conditions regarding customs and trade policies," Altmaier said and noted that a road map must be devised to identify hurdles and launch dialogue with the EU Commission.

In its Dec. 21, 2016, assessment, the EU Commission proposed the modernization of the current deal, which only covers a limited range of industrial products and excludes agriculture, public procurement and services.

Highlighting that the upgrade of Turkey-EU trade relations forms an essential part of efforts made by Turkey and the EU to deepen relations in key areas of common interest, the commission reiterated its resolution to continue delivering on the commitments it has made as part of the deal with Ankara.