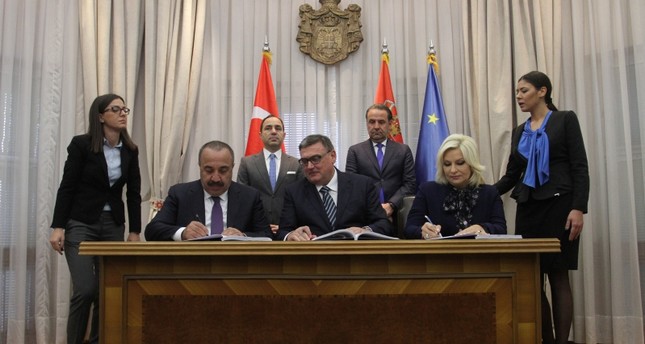 Serbian government and Turkish construction company Taşyapı on Monday signed a $27 million contract for reconstruction of the road connecting two southern cities in the Balkan state.

The contract to reconstruct Novi Pazar-Tutin road was signed by Taşyapı Board Chairman Emrullah Turanlı and Serbian Minister of Construction, Transportation and Infrastructure Zorana Mihajlovic.

Novi Pazar is the largest city in the Sandzak region of Serbia. It was established between 1459-1461 by Ishakoglu Isa Bey, the founder of Bosnia's capital Sarajevo and the capital of Macedonia, Skopje.

Turkey gives a great importance to the Sandzak region as it plays role in bridging the relations between the two nations and keeps the cultural ties at its strongest.

Tutin is also the first municipality in Serbia that has renewable wind power.

Speaking at a ceremony, Mihajlovic said 80 percent of the project is financed from a Turkish loan and the remaining 20 percent from the budget of Serbia.

She added that Turkish firms take part in projects where most firms are reluctant to invest in, and create employment opportunities in these areas.

Rasim Ljajic, Serbian deputy prime minister in charge of trade, tourism and telecommunication, and Turkey's Ambassador in Belgrade Tanju Bilgiç were also present at the signing ceremony. Ljajic said that the reconstruction of the road has been on the government's agenda for the last 10 years

Bilgiç said Turkish Cooperation and Coordination Agency (TIKA) has so far invested about $20 million in the Sandzak region and that there are still many reconstruction projects.

Taşyapı previously signed a cooperation deal in September for the construction of the Serbian section of the highway connecting Serbian capital Belgrade with Sarajevo. The section in Serbia alone is expected to cost more than one billion euros, Mihajlovic previously said, adding that it is expected to be completed by late 2019 or early 2020.

The reconstruction of the Novi Pazar - Tutin road is being carried out as part of this project.

Share on Facebook Share on Twitter
Previous in Economy Turkey's GDP growth in 2019 is expected to be mainly export-oriented,... Next in Economy The eurozone grew much less than expected in the third quarter, the...
DAILY SABAH RECOMMENDS