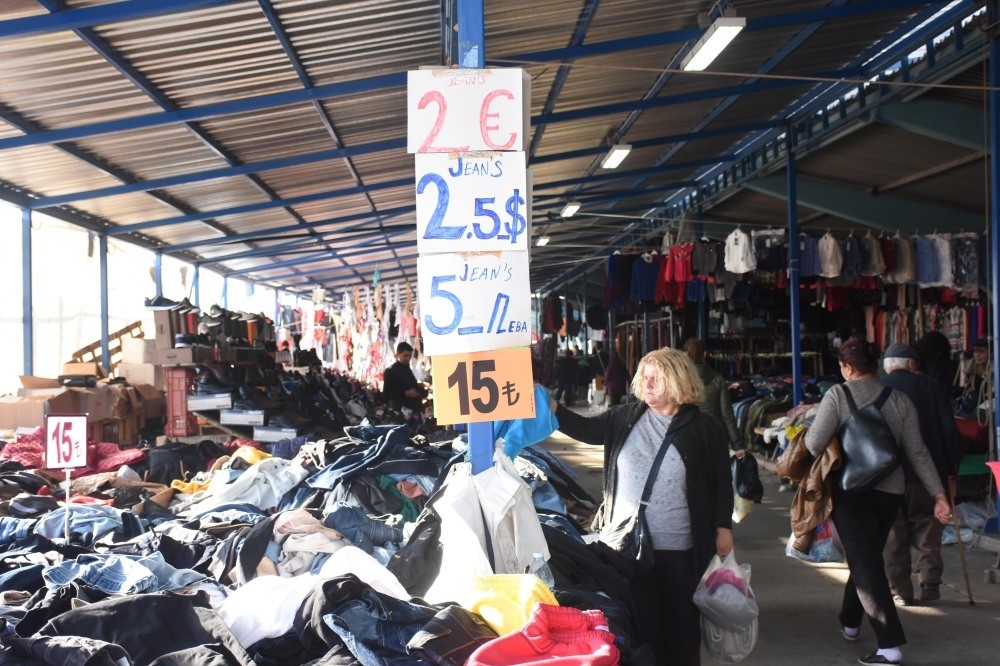 The popular bazaars of the northwestern province of Edirne, which neighbors Greece and Bulgaria, have been frequented by Greek and Bulgarian citizens looking for cheaper products due to the recent devaluation of the Turkish lira.
by Daily Sabah Nov 02, 2018 12:00 am

The recent volatility in the exchange rate has benefited the tradesmen in Turkey's northwestern province of Edirne. With people coming on shopping tours from neighboring countries, shop windows in the Turkish province have started displaying price lists in Bulgarian and Greek.

Bulgarian websites and mini-shopping dictionaries have also been prepared and distributed to local tradesmen for easier communication with customers, with the municipality using Bulgarian and Greek languages for promotions to attract more tourists to the city.

Bulgarian and Greek customers usually arrive in Edirne early on Friday on buses depending on the increase in exchange rates. They buy fruits and vegetables from the public marketplace, souvenirs at the Arasta Bazaar, local products at the Grand Bazaar and cosmetics and clothing from shops on Saraçlar Street.

The windows of the shops in this region are filled with price lists in Bulgarian and Greek. Many shops employ at least one personnel that speaks Bulgarian or Greek.

Just ask Turkish-born Güllühan Ali, who is a Bulgarian citizen working in a shop in Edirne that sells cleaning products. "We sell a product that costs TL 100 ($18) in Bulgaria, but here it is for TL 70-80. That is why they prefer to buy from us," Ali said.

The products in a perfume shop located on Saraçlar Street, the busiest street in the city, attract great interest. The tradesman Fuat Tekin said that most of the foreign customers coming to the city buy perfume.

"This is a very busy period. Since we are selling cheaper than duty free, they prefer to shop from us. We usually sell to the Bulgarians on weekends and to the Greeks during the week. We have customers who come twice a month on average," Tekin said.

Maria Papadopulo, a customer from Thessaloniki, said she came with a few of her friends, noting they came here to shop after a quick tour around the city.

"Everything is cheaper than Greece," she said.

Mehmet Savruk, a municipal police officer who has been working in Edirne's public market for 10 years, said that he deals with Bulgarian customers' problems because he can speak Bulgarian.

"I knew a little Bulgarian, and then I attended a course and learned more. When there is a problem, the market craftsmen call me, I also help the Bulgarian customers," he said.

In order to reduce the communication problems between tradesmen and foreign customers, mini-dictionaries in Bulgarian were distributed to the tradesmen.

Bülent Reisoğlu, the chairman of Ulus Market Tradesmen Cooperative, said that they aim to solve the communication problem with this.

Bayram Ihlamur, who has been setting up his stall in the market for five years, said when the customer asks for the price of something, they look up from the dictionary and say it in Bulgarian to communicate better.

Edirne Mayor Recep Gürkan noted that they are promoting in both Bulgarian and Greek to attract more tourists.

In Edirne, tradesmen have begun to make their websites in Bulgarian. Customers can access the website of the companies and examine the prices before leaving their country. Those who want to reach more customers share their campaigns and promotions with Bulgarian and Greek brochures through social media.

Levent Özkan, the store manager of a company that sells building materials, said they are attracting more customers like this. "Our customers buy water faucets and ceramics. A product we sell here for TL 23 is sold for 23 levs in Bulgaria, which amounts to about TL 100," Özkan said. "Our customers sometimes take all the products they need at one time and entrust them to us. In order to avoid customs, they carry them to their country gradually. We keep the products for them here."