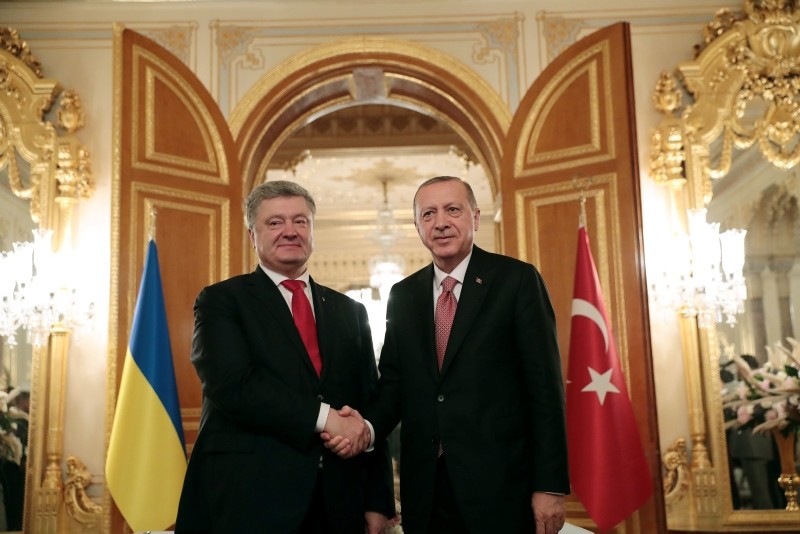 Turkey is determined to conclude the free trade agreement with Ukraine by the end of the year, President Recep Tayyip Erdoğan said Saturday, adding that the two countries aim to reach $10 billion trade volume with this deal.

Erdoğan's words came at a joint press conference with his Ukrainian counterpart Petro Poroshenko held after the seventh meeting of the High Level Strategic Cooperation Council that convened in Istanbul.

The president said that the Ottoman Empire was one of the first countries to recognize the short-lived Ukrainian People's Republic in 1918 and this year marks the centenary of diplomatic relations between the two countries.

Erdoğan said that relations between the two nations will continue to improve, adding that the number of tourists that arrived in Turkey from Ukraine in 2018 has exceeded one million.

"We have repeatedly reiterated that we will not recognize the illegal annexation in Crimea," Erdoğan said, adding that Turkey will continue to protect the rights of Crimean Tatars who either live in Crimea or have left since the occupation.

Expressing hopes for a quick and peaceful end to the armed conflict in eastern Ukraine's Donbass region, Erdoğan stated that Turkey monitors the efforts of the Special Monitoring Mission of the Organization for Security and Cooperation in Europe (OSCE), headed by Ambassador Ertuğrul Apakan of Turkey, with admiration. The president added that Turkey supports the reform program in Ukraine.

He also said that the cooperation between Turkey and Ukraine will continue to end the presence of the Gülenist Terror Group (FETÖ) in the eastern European nation.

Poroshenko confirmed Erdoğan's remarks regarding the FTA, saying he has given clear instructions to accelerate the completion of negotiations on reaching the deal.

The Ukrainian president also expressed hope for the Turkish International Cooperation and Development Agency (TIKA)'s help in rebuilding the infrastructure in the war-ravaged Donbass.

"We trust Turkey and we would be happy to see it contribute to peace in Donbass by sending peacekeepers within the framework of a U.N. mission," Poroshenko said.

Prior to the meeting, the two leaders also held bilateral talks.

The two countries concluded a development and cooperation deal, signed by Turkish Cooperation and Coordination Agency (TIKA) President Serdar Çam and Ukraine's Kubiv. Turkey's Presidency of Defense Industry and Ukraine's Ukroboronprom also signed a memorandum of understanding after the meeting.