Turkey will maintain fiscal discipline to keep inflation in check, budget in balance 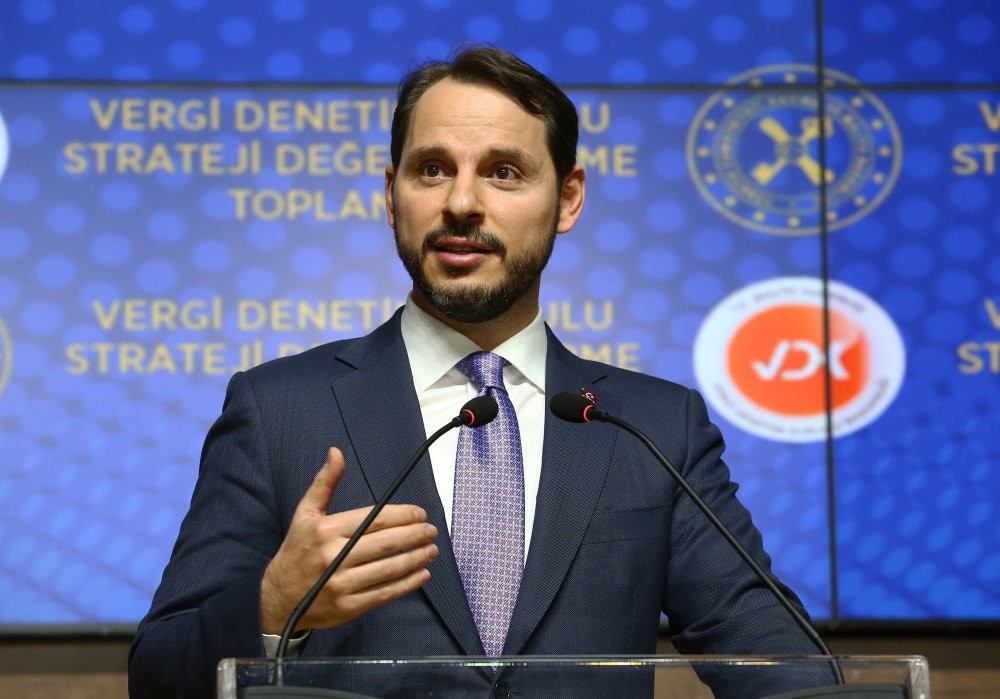 Treasury and Finance Minister Berat Albayrak delivers a speech during his address at the Turkish Tax Inspection Board in Ankara, Oct 31.
by Daily Sabah Nov 06, 2018 12:00 am

The Justice and Development Party (AK Party) government has been making huge efforts to ensure solid economic rebalancing since it took office in early July this year and these efforts have been accelerated with the announcement of the New Economy Program in late September. Treasury and Finance Minister Berat Albayrak reiterated the government's commitment to fighting against inflation and accomplishing the budgetary target by the end of this year and next year. "We will analyze year-end data for the budget and in the new year, we will continue to form policies with strong commitment to the fiscal balancing and budget discipline," Minister Albayrak said in a live broadcast on the A Haber news channel.

"We are fully committed to the principle of budgetary discipline," he emphasized. The central government budget balance posted a deficit of TL 56.7 billion ($10.45 billion) in the period of January to September and budget revenues totaled TL 546.8 billion in this period, up nearly 20 percent year-on-year. Last year, the budget deficit was TL 47.4 billion, totaling around 1.5 percent of the country's GDP. The new economic program suggests that the government predicts that the ratio of the budget deficit to GDP will be 1.9 percent this year and 1.8 percent in 2019.

The positive indicators for economic rebalancing are most evident in the monthly surplus of the current account.

"The October data is expected to outperform and we will see a better outlook in November and December," the minister said.

One of the macroeconomic issues the government is tackling the inflationary pressures which disrupted pricing behaviors in the real economy.

"We observed distorted pricing mechanisms in September, which is reflected in inflation data," the minister said. "In October, inflation started to slow down. In November and December, more positive data for inflation will be seen as the Turkish lira has spiked against the U.S. dollar and lira, dragging down production costs."

The downward trend in oil prices and energy costs will also facilitate a reduction in the inflation, the minister stated.

Minister Albayrak also highlighted that last week's tax reductions will reduce the inflation in the last two months of the year.

The Turkish lira weakened after the report and was trading 0.2 percent lower at 5.45 per dollar in the afternoon. The currency lost nearly half of its value against the dollar amid a diplomatic row with the U.S. but has rebounded by more than 25 percent from August's all-time low.

In September, inflation hit 24.52 percent on a year-on-year basis, up 6.3 percent from the previous month, according to TurkStat. Inflation climbed for a sixth straight month, hitting the highest level in almost 15 years. Last week, the Turkish Central Bank revised Turkey's year-end inflation rate forecast to 23.5 percent.

As noted in Turkey's New Economy Program announced last month, the country's inflation rate target for this year is 20.8 percent. The target for next year is 15.9 percent, 9.8 percent for 2020, and 6.0 percent for 2021. Over the past five years, the annual inflation saw its lowest level at 6.13 percent in April 2013, while the figure reached its highest level this October.

In order to curb the inflation and ensure a balance in the pricing behaviors, the Treasury and Finance Ministry launched a full-scale campaign in early October with the support of private sector.

Among the measures announced to curb inflation was a campaign of minimum 10 percent nationwide cut on prices. To support businesses and maintain investments, the banks will decrease interest rates by 10 percent on loans issued after Aug. 1. The treasury and finance minister explained that some of the participating companies have reduced prices by more than 10 percent by up to 20 to 30 percent.

Minister Albayrak stressed that more than 2,500 companies have participated in the campaign with expansive discounts.