Turkey sees US resumption of oil, gas sanctions on Iran as wrong, destabilizing 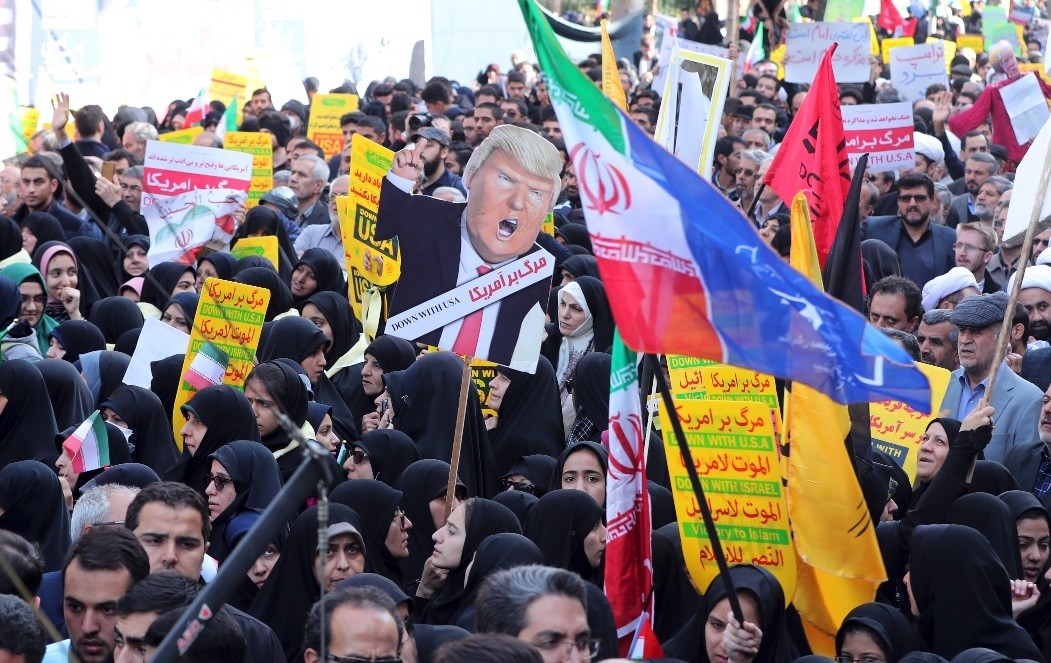 Iranians hold a placard showing a caricature of U.S. President Donald Trump during an anti-U.S. demonstration marking the 39th anniversary of the U.S. Embassy takeover in Iran, Nov. 4.
by Daily Sabah Nov 07, 2018 12:00 am

Turkey maintains that the U.S.' unilateral decision to reimpose sanctions on Iranian oil is a move that will drive global imbalance at a time when the world needs stability and peace

Since the announcement of the reimposition of U.S. sanctions on Iran, Turkey has opposed the regime of unilateral sanctions as the country is one of the key customers for Iranian oil and gas, benefiting from geographical proximity, crude quality and favorable price differentials. President Recep Tayyip Erdoğan once again reiterated Turkey's opposition to the sanctions levied by the U.S. administration on the Iranian energy sector, describing it as a move to disrupt the global equilibrium.

"U.S. sanctions on Iran are wrong. For us, they are steps aimed at unbalancing the world. They also go against international law and diplomacy. We don't want to live in an imperialist world order," Erdoğan told reporters after his address to the Justice and Development Party (AK Party) parliamentary group in Ankara. "Our stance on sanctions has always been clear, especially in issues related to oil. We have always said this, we won't abide by these sanctions," Erdoğan said. Turkey imports nearly 10 billion cubic meters of natural gas per year from Iran. According to the annual market report of the Energy Market Regulatory Authority (EMRA), Turkey imported 9.2 billion cubic meters of gas from Iran last year, which accounted for 16.74 percent of the country's total gas imports.

Turkey is also one of the key destinations for Iranian crude, accounting for more than a quarter of Turkey's daily average imports of around 830,000 barrels, according to data from the market regulator. While Turkey imported 930,978 tons of crude oil from Iran in May, the figure fell to 287,842 tons in June, according to the monthly petroleum industry report from the EMRA. In July and August, oil purchases from Iran totaled 867.3 million tons and 674.3 million tons, respectively.

In the first five months of the year, Turkey's crude imports from Iran made up more than 50 percent of its total oil imports, the EMRA data showed. Last year, Turkey imported 25.8 million tons of crude oil, and Iran ranked first among Turkey's oil suppliers with 11.5 million tons.

Çavuşoğlu's comments to reporters in Japan came a day after Washington reimposed sanctions, abandoning a 2015 deal between world powers and Iran over its nuclear program, while temporarily allowing major customers, including Turkey, to keep buying crude from the Islamic republic.

"We do not believe any result can be reached with sanctions. I think meaningful dialogue and talks are more useful than sanctions," he said. Çavuşoğlu also said it was not that easy for countries including Turkey and Japan to diversify energy resources to comply with the sanctions. "Not only neighboring countries, but many countries from many regions of the world are being impacted by these unilateral sanctions," he stressed.

On Monday, the U.S. granted a waiver to Turkey and seven other countries, allowing them to temporarily continue buying Iranian oil, U.S. Secretary of State Mike Pompeo announced. China, India, Japan, South Korea, Italy, Greece and Taiwan were also exempted from the sanctions.

As a result of pre-sanctions pressure from Washington, Iran's oil exports in November may not exceed 1 million to 1.5 million bpd, according to industry estimates. Companies that monitor Iran's shipments are already seeing a drop in tanker activity this month.

Each of the countries, key buyers of the third-largest exporter of the Organization of Petroleum Exporting Countries (OPEC), have cut down their purchases from Iran over the last six months. Japan and South Korea were previously reported to have fully ceased oil purchases from Iran.

In May, U.S. President Donald Trump unilaterally withdrew his country from the 2015 landmark nuclear deal signed between Iran and the P5+1 group of nations - the five permanent U.N. Security Council members, namely the U.S., Russia, China, Britain and France plus Germany. He also announced that he would reinstate sanctions against Tehran, which were lifted by the agreement in exchange for tight restrictions on the country's nuclear program.

The measures that came into effect on Monday restored all the sanctions that had been lifted under the accord that gave Iran billions of dollars in sanctions relief in exchange for curbs on its nuclear program.

The U.S. also sanctioned more than 700 Iranian entities and assets on Monday, including 50 Iranian banks, 200 individuals and vessels in Iran's shipping and energy sectors, and Iran's state-run Iranian Air and more than 65 of its aircraft, according to the U.S. Treasury's website. The move brought the number of Iran-related targets being sanctioned by the Trump administration over the past two years up to more than 900.

Trump is trying to cripple Iran's oil-dependent economy and force Tehran to squash not only its nuclear ambitions and its ballistic missile program but also its support for militant proxies in Syria, Yemen, Lebanon and other parts of the Middle East.