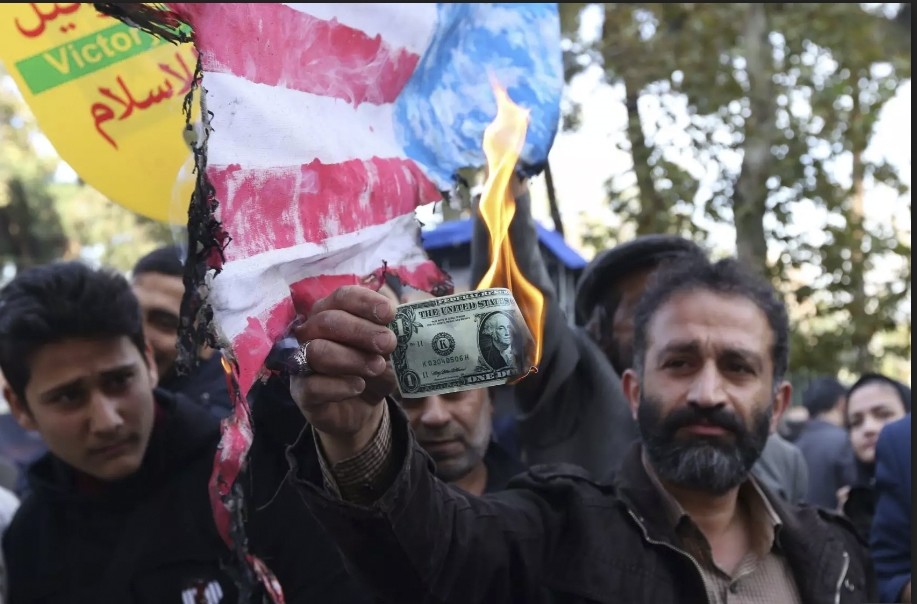 An Iranian protester burns a dollar banknote during a demonstration outside the former US embassy in Tehran, Iran on Nov. 4.
by Elif Erşen Nov 13, 2018 12:00 am

Exposed to sanctions but able to keep a limited amount of its oil trade thanks to waivers, Iran is looking for partners to maintain the flow of revenue through energy trade with main partners

In the quest to maintain money flow in its energy trade despite the sanctions imposed by the U.S. on Nov. 5, Iranian authorities point to the urgency of keeping up the oil trade in local currencies with partners like Turkey and China, who are among the eight countries that have secured six-month waivers from the sanctions.

It is not the first time that the third-largest exporter of the Organization for Petroleum Exporting Countries (OPEC), Iran, has been exposed to U.S. sanctions aimed at the Persian Gulf nation's economy meant to isolate it from international political and economic order.

Immediately after U.S. President Donald Trump announced his country's withdrawal from the nuclear deal on May 8, Iran and its main trading partners have immersed themselves in an international endeavor to find a financial solution that could avert the risk of being exposed to the U.S. financial system while maintaining oil trade. To that end, Iranian authorities and businesspeople have so far stressed the urgency to trade in local currencies with the main buyers of the nation's commodity, like Turkey and China, as they are less hopeful about concrete steps from the European Union, which announced the establishment of a special purpose vehicle (SPV) to facilitate payments for oil imports from Iran but have not yet operationalized following the reimposition of U.S. sanctions on Nov. 5.

Despite Washington pushing Iranian crude buyers to halt imports, the U.S. administration could not afford a price hike as the brent prices hit above $80 per barrel in previous weeks due to the uncertainty of U.S. sanctions on Iran. Therefore, eight countries – Turkey, China, India, Taiwan, South Korea, Japan, Italy and Greece – have managed to secure a six-month waiver from the U.S. on the condition that they will reduce their purchases. These eight countries account for about 75 percent of Iran's oil exports. However, neither the U.S. administration nor the recipients of waivers, except Turkey, have disclosed how much oil they can import.

According to estimates by oil market watcher Bernstein Energy, Iran's oil exports will average 1.4 million to 1.5 million barrels per day (bpd) during the exemption period, down from a peak of almost 2.8 million to 2.9 million bpd in April. Turkey said it is allowed to import 3 million tons of Iranian crude a year, corresponding to 60,000 bpd. Last year, Turkey imported 25.8 million tons of crude oil, and Iran ranked first among Turkey's oil suppliers with 11.5 million tons.

Meanwhile, the industry estimates claim that Iran's oil exports in November may not exceed 1 million to 1.5 million bpd due to reductions in the pre-sanctions period.

Regarding payments for the oil trade in the waiver period, U.S. officials said the granted exemptions from the sanctions will deposit Iran's revenue in escrow accounts in their national currency, and Tehran will use that money in return for humanitarian trade. This means the money will not directly go to Iran, and it can only be used to buy certain non-sanctioned goods from its crude export customers.

These waivers and the mechanism of escrow accounts are not sufficient to keep Iranian trade alive since the country only has limited access to its oil revenues, and there is still uncertainty as to the aftermath of the six-month period. Therefore, the iterative statements emphasizing the use of alternative payment methods like SPVs, ditching the dollar to trade in local currencies, deploying other financial instruments and resorting to oil-for-goods trade in some cases are still prevailing articles of the agenda of Iran and its trading partners, as some of the Iranian oil buyers have not been granted exemptions.

Iran looks to work with Turkey, China and others

Maintaining the flow of oil money is vital for the Iranian economy as a significant bulk of revenues depend on the commodity trade. From March 20, 2017 to March 20, 2018, which corresponds to Iranian year 1396, Iran's total exports were recorded at $98.1 billion, of which $65.8 billion came from oil exports. The share of oil industry in gross domestic product based on current prices was 13.5 percent.

The first reactions of Iran and its commercial partners have been to keep up the oil trade in the aftermath of sanctions by using alternative payment methods, ditching dollar and trade in local currencies or resort to oil-for-goods trade as they have done in the previous sanctions period. Iranian experts and business circles have voiced their advocacy to use national currencies in trade with Turkey, Russia, China, India and other partners through some sort of fund to finance the trade among these nations.

"The U.S. policy to renege on contractual promises and commitments have led Iran and its partners to be creative in developing financial solutions to keep the trade under sanctions," Turkey-Iran Chamber of Commerce Chairman Jalal Ebrahimi told Daily Sabah and continued, "Therefore, Iran's established trade partners, particularly Turkey and China, will act in cooperation to avert the financial risks of sanctions." 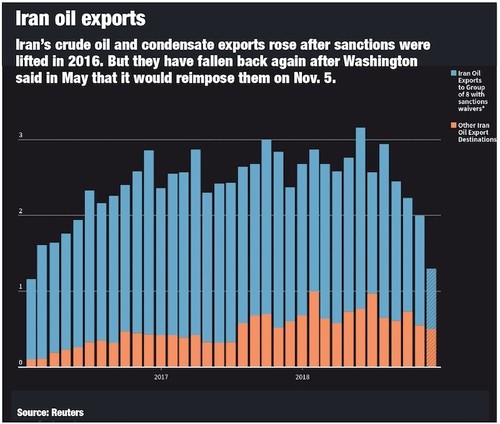 Ebrahimi also stressed that the European Union must protect itself against the U.S. sanctions, which he described as attacks on U.S. allies. He also emphasized that the EU had no choice but to cooperate with Iran in order to preserve its oil supplies because neither the EU nor the United Nations are participants in this latest sanctions regime.

Meanwhile, the Brussels-based SWIFT financial messaging system announced that it will fully comply with the U.S. sanctions and disconnected some Iranian banks from its system over the weekend.

Iran's main trading partners Turkey, China and Russia may seek to establish a fund that will finance commercial activities without risking penalties from the sanctions. "A fund to finance trade among Turkey, Iran, China and Russia with national currencies would certainly stymie the repercussions of this forced attack on Iran and its partners," Ebrahimi said.

Dr. Sajad Kalantar, a senior expert at the Central Bank of Iran, censured the U.S. sanctions and argued that Washington is attacking its long-established allies like Turkey and the EU. "The U.S. has proved that it is an unreliable partner," he said and added: "Turkey, Iran and Russia must work to ditch dollar in trade. These three countries are capable of producing strategic goods and commodities and trading in local currencies to pose a threat to the dominance of U.S. dollar."

Kalantar suggested that the U.S. closely follows any move to undermine its national currency that has become the dominant trading medium worldwide over the last century. Therefore, he said, Washington tries to block any move to challenge the authority of the U.S. dollar in international trade.

Replacing the dollar in international trade might require a number of conditions to flourish. For instance, in order to use the Chinese national currency yuan in China's trade with Iran or Turkey, China needs to gain a bigger advantage over the U.S. in global exports. According to a paper published by Harvard University's Gita Gopinath and Jeremy Stein: "If the gap between Chinese and U.S. shares in world exports widens far enough, we could eventually get to a point where a renminbi-dominant equilibrium becomes inevitable. At this point, the dollar's share in global trade and finance could potentially decline quite sharply."

Moreover, if Turkey, Iran and China are planning to trade in national currencies, the bilateral trade among these states must be balanced. The bilateral trade volume between China and Iran totaled to $37.1 billion in 2017 and Iran's exports to the world's second largest economy was recorded at $18 billion. But Turkey has more than $20 billion trade deficit with China.

The Joint Comprehensive Plan of Action (JCPOA), which whereby P5+1 countries – the U.S., the U.K., France, China, Russia and Germany – along with the EU agreed to relieve sanctions imposed on Iran on the condition that the country curb its nuclear capacity in July 2015, facilitated the money transfer between Iran and European banks, particularly the ones in Germany and Switzerland, two sarrafs who are senior executives at a prominent exchange house in Tehran told Daily Sabah on the condition of anonymity at a meeting in their office in the Iranian capital.

EU is one of the big customers of Iranian oil. According to the OPEC data, Europe imported 755,000 barrels of crude per day from Iran in 2017, which was 497,300 barrels per day (bpd) in 2016. The data of the European Commission also revealed that the value of the EU's petroleum and petroleum products from the country reached 8.9 billion euros, constituting 88.7 percent of Iran's exports to the union.

Since the U.S. sanctions banned any dollar transactions and restricted the transfer of euros in the official banking system, exchange offices offered breathing room for the Iranian banking system during the previous sanctions period 2012 to 2015.

"Under the sanctions regime, banks will immediately move out of the system and all money transfers will be carried out via exchange offices," they said.

On a stroll around the Iranian capital, it is possible to see many exchange offices that indeed facilitate very costly money transfers as each step requires a definite amount of commission of the sum subjected to transfer. In reference to the expensiveness of the old and slow money transfer system hawala, the sarrafs stressed the urgency to come up with new methods. Through hawala, Iran managed to receive its oil and gas revenues through various exchange channels in Dubai, Iran and Turkey during the previous sanctions period. The system, they said, encouraged Iran's partners to continue trade during the previous sanctions regime as Pakistan and India were also recruited in the loop.

One of the channels Iran used to maintain trade with its biggest oil customer China from 2012 to 2015 was Kunlun Bank controlled by the financial arm of Chinese state energy group CNPC. Kunlun Bank was among the financial institutions sanctioned by the U.S. Treasury in 2012. The Chinese bank had already quietly suspended euro-denominated payments from Iran in late August, according to a Reuters report.

The sarrafs in Tehran explained that Kunlun bank was a no name financial institution back in 2008 when it had only one branch. "All Iranian export income generated from sales to China had gone through Kunlun Bank. The bank grew so fast that it reached 50 branches in one year thanks to the Iranian money," they explained. The Kunlun bank, where Iran's money is deposited, used to pay for Iran's imports from China.

When asked about the feasibility of a special purpose vehicle to enable trade with Iran announced by High Representative of the European Union for Foreign Affairs and Security Policy Federica Mogherini in late September, the Iranian sarrafs argued that these kind of mechanisms might be effective but as long as no concrete action has been taken and the statements remain confined to political discourse, it is hard to achieve fruitful results.

Despite the EU's commitment to creating a special purpose vehicle to continue trade with Iran with sanctions on Tehran's oil, the bloc is struggling with the set-up of such a vehicle because no EU member is willing to host it for fear of angering the U.S., a report by Financial Times said, citing EU diplomats. The EU has been reported to have come across obstacles for setting up a payment mechanism for Iran as no EU nation is eager to host the SPV, the diplomats reportedly said.