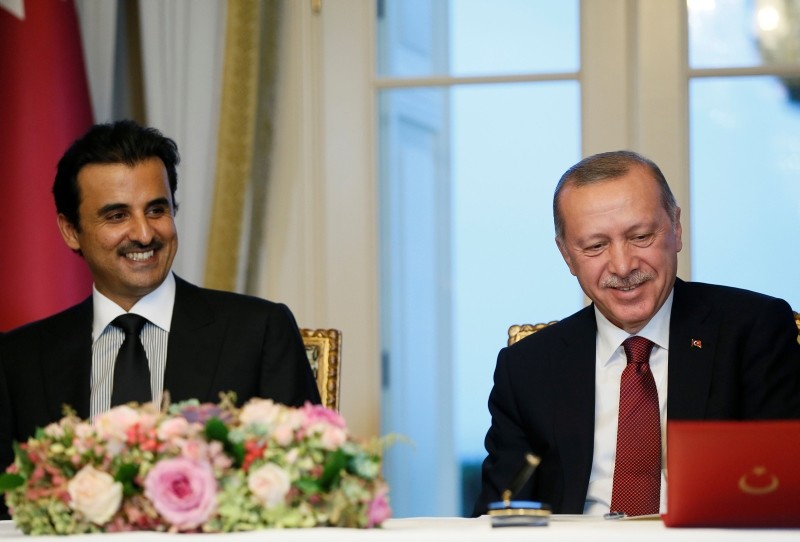 Celebrating 45 years of relations, Turkey and Qatar have once again stressed the mutual commitment to their efforts to further broaden relations at all levels, political and economic

Within the framework of the distinct relations between Ankara and Doha, the 4th meeting of the Turkey-Qatar High Strategic Committee, chaired by President Recep Tayyip Erdoğan and Qatari Emir Sheikh Tamim bin Hamad Al Thani, was held Monday in Istanbul. Speaking at the meeting, President Erdoğan stressed the importance of Turkish-Qatari ties and expressed his content with the level of relations at a time when the two countries are celebrating their 45th year of bilateral ties. Erdoğan emphasized that Turkey and Qatar are each other's friends during "hard days."

Friends in bad times as well as good times, Turkey and Qatar, have developed their relations rapidly in various fields over the past few years. The strategic relationship at the economic, political and military levels and the intensive bilateral visits at all levels have added a major impetus to bilateral relations.

"The Turkish nation has made intense efforts to frustrate the blockades and sanctions against the Qatari brothers. Qatar was among the countries that gave the strongest support to our country in the international arena after the July 15 treacherous coup attempt. In recent months, it has stood by us in the face of speculative initiatives targeting our economy. I would like to take this opportunity to express my special gratitude once again to our loyal friend Qatar and its people for their support and solidarity," he said.

Referring to the meeting with Qatari Emir Al Thani, Erdoğan stressed that the two sides have expressed their strong will to further deepen bilateral relations.

The meeting was considered important as the two countries are eager to accomplish various goals in many sectors.

The meeting discussed the opportunities to further develop cooperation between the two countries in various fields, and exchange views on regional issues.

A number of agreements on transportation, trade and economy were signed between the two countries during the meeting. On many occasions, Ankara and Doha have demonstrated that they are partners that exchange material and moral support and have close coordination during hardships.

The fraternal ties between the two allies gained significant momentum, particularly after the start of the Gulf crisis and the failed coup attempt in the summer of 2016, during which Turkey and Qatar strongly supported each other.

In June 2017, a handful of Arab states, led by Saudi Arabia, abruptly severed diplomatic relations with Qatar and imposed a blockade on the tiny Gulf country, accusing it of supporting terrorism. The Qatari government denied the accusation, blasting the blockade as unjustified and a violation of international law.

Amid the rift, Turkey provided increased support to Qatar, boosting food and other exports to meet any shortages. The trade between the two countries saw a significant rise in the said period, while the two countries also agreed on various projects for the coming period.

Meanwhile, Qatar's Al Thani visited Ankara in August in an apparent show of support for Turkey, pledging $15 billion in direct investments in the country that found itself embroiled in a crisis with the U.S.

Just days after the meeting between the leaders of the two countries, Qatar and Turkey's central banks inked a currency swap agreement to provide liquidity and support for financial stability.

The core objective of the agreement was to facilitate bilateral trade in respective local currencies and support the financial stability of the two countries. The swap agreement was signed over the Turkish lira and Qatari riyal and concluded with an overall limit of $3 billion.

On the other hand, this year in early September, Trade Minister Ruhsar Pekcan and Qatar's Economy and Trade Minister Ahmed bin Jassim bin Mohammed Al Thani inked the Economic and Trade Partnership Agreement, which targets the comprehensive liberalization of goods and services trading between the two countries.

The agreement, which also included telecommunication and financial services, will provide a serious breakthrough in reducing Turkey's current account deficit and attracting Qatari capital to the country. It is expected to reduce the costs in production through the cheaper supply of refined oil products and natural gas.

Turkey's exports to Qatar have almost doubled in the first eight months of this year, according to the Aegean Exporter's Association (EİB) data. Exports to Qatar have increased 93 percent year-on-year from January to August – reaching a total of $636 million from $330 million in the same period last year.

Furthermore, Turkish contractors have undertaken 137 projects in Qatar to date, totaling $14.8 billion. On the other hand, Qatar's investments in Turkey have reached more than $20 billion to date.

The Supreme Strategic Committee between the two countries was established in 2014 as a bilateral mechanism for high-level dialogue and cooperation. The first meeting of the committee was convened in Doha in December 2015, while the second took place in Trabzon in December 2016 under the chair of the two leaders. The third of the meetings took place in Doha in November last year. During those meetings, various agreements, protocols and memoranda of understanding were signed, further strengthening Turkey's relations with Qatar.

The two countries saw around 40 agreements being signed as a result of the said meetings.