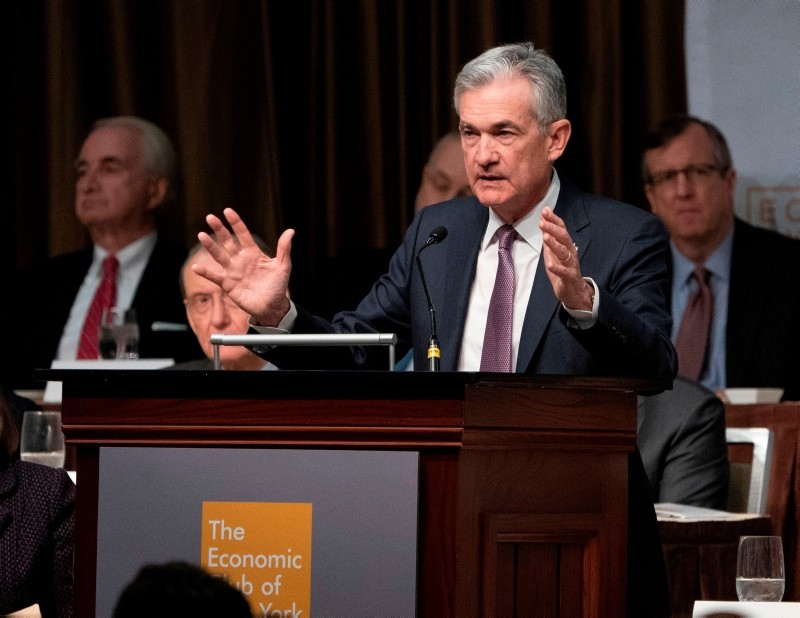 Federal Reserve Chairman Jerome Powell speaks to the Economic Club of New York on November 28, 2018 in New York. (AP Photo)
by Associated Press
Nov 28, 2018 12:00 am
Federal Reserve Chairman Jerome Powell cast a bright picture of the U.S. economy Wednesday and appeared to suggest that the Fed might consider a pause in its interest rate hikes next year to assess the impact of its credit tightening.

Powell's comments ignited a rally on Wall Street, with the Dow Jones Industrial Average surging more than 200 points after his remarks were released.

Referring to the Fed's gradual increases in its benchmark rate, Powell said, "there is no preset policy path." Rather, he said, the Fed will assess the most recent economic and financial data in deciding whether or how fast to keep raising rates.

The chairman also suggested that interest rates appear to be just below the level the Fed calls "neutral," where they are thought to neither stimulate growth nor impede it. That contrasted with a remark Powell made in October that the Fed's policy rate was still well below neutral. That remark had unsettled investors who feared it signaled that the Fed would continue raising rates well into the coming months.

The Fed has raised its benchmark short-term rate, now in a range of 2 percent to 2.25 percent, three times this year and is expected to do so again next month. But the likely pace of rate increases next year remains a subject of speculation.

Speaking to the Economic Club of New York, the Fed chairman also said that while some corporate debt loads have reached riskier levels, "we do not see dangerous excesses in the stock market." He added that the Fed regards no major asset class as significantly inflated, "as some did, for example, in the late 1990s dot-com boom or the pre-crisis credit boom."

The central bank's rate increases have gradually raised borrowing costs for consumers and businesses. Any slowdown or pause in its rate hikes would be welcome news for a stock market that's been battered by fears that the Fed's continued credit tightening could end the long bull market.

While noting that some forms of corporate debt levels have become concerning, Powell the financial system and markets appear far sturdier than they did before the 2008 crisis.

The Fed chairman said the central bank is monitoring potential vulnerabilities in the banking system to ensure its continued stability.

In an appearance earlier this month, Powell cited strong annual economic growth above 3 percent and unemployment at a near five-decade low of 3.7 percent. Those trends, he said, were coinciding with inflation remaining "right on target" at the Fed's goal of 2 percent annual price increases.

But Powell also noted a number of looming risks, including the slowdown in global growth and the fading economic benefits of the tax cuts and government spending boost that took effect this year as well as the cumulative effect of the Fed's own rate hikes. Many economists also worry about potential economic damage caused by President Donald Trump's trade conflicts with China and other nations.

For his part, Trump has sought repeatedly to shift blame for any economic troubles to the Fed and its rate increases. In an interview Tuesday with the Washington Post, the president complained bluntly and at length about Powell, who was Trump's hand-picked choice to lead the Fed.

Trump argued that the Fed's policies were damaging the economy and pointed to the recent stock market declines and General Motors' announcement Monday that it would cut up to 14,000 workers in North America and put five plants up for possible closure.

Higher interest rates tend to slow economic growth over time as well as pressure stock prices. For those reasons, this year's hikes have made the Fed the target of unusual public attacks from Trump — criticism that has accelerated with the past month's sharp declines in the stock market. Trump has complained that the Fed is threatening to undo the economic stimulus being provided by the tax cuts and that its rate hikes are unnecessary because inflation has remained relatively low.

In its most recent projections, the Fed forecast that it would raise rates in December for the fourth time this year, followed by three more hikes in 2019.

Analysts think a rate hike next month is all but certain, possibly in part because they think the Fed doesn't want to appear to be bowing to pressure from Trump. But some economists say three rate increases for next year are beginning to look less certain.