US economy grows 3.5 percent in Q3 on stronger business investment 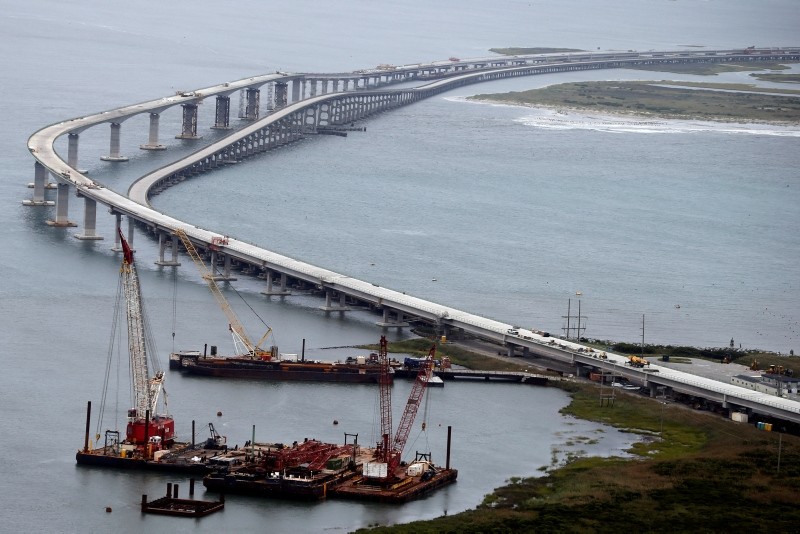 In this Sept. 15, 2018, file photo construction barges are tucked in a protected area around the Bonner bridge across Oregon Inlet, on Hatteras Island, N.C. (AP Photo)
by Compiled from Wire Services Nov 28, 2018 12:00 am

The U.S. economy expanded at a solid 3.5 percent annual rate in the July-September quarter, led by lower but still strong consumer spending and more business investment than previously estimated.

The Commerce Department's figure for gross domestic product, the broadest measure of the nation's output of goods and services, was the same as its first estimate last month. Greater corporate investment offset downward revisions in spending by state and local governments and consumers.

Growth is being driven by the White House's $1.5 trillion tax cut package, which has given consumer spending a jolt and bolstered business investment. The fiscal stimulus is part of measures adopted by President Donald Trump's administration to boost annual growth to 3 percent on a sustainable basis.

The government also reported on Wednesday that after-tax corporate profits increased at a 3.3 percent rate last quarter after rising at a 2.1 percent pace in the second quarter.

An alternative measure of economic growth, gross domestic income (GDI), increased at a rate of 4.0 percent in the third quarter, quickening from the second quarter's 0.9 percent pace.

The average of GDP and GDI, also referred to as gross domestic output and considered a better measure of economic activity, increased at a 3.8 percent rate in the July-September period, up from a 2.5 percent growth pace in the second quarter.

But dark clouds are gathering over the economic expansion that is now in its ninth year and the second longest on record. The third quarter figure follows a robust expansion of 4.2 percent in the April-June quarter. Six months of healthy growth have put the U.S. economy on track to expand in 2018 at its fastest pace in 13 years. Still, economists forecast that growth will slow in the fourth quarter and decelerate further next year.

Business spending on equipment appears to have weakened early in the fourth quarter and higher interest rates are slowing demand for housing.

With oil prices rapidly falling, business spending on equipment is likely to moderate significantly. Lower oil prices tend to hurt investment in the energy sector because of reduced profits. Brent crude oil prices have slumped by more than 30 percent from a four-year high above $86 in early October, pressured by concerns of oversupply amid slowing global economic growth.

Solid third-quarter growth is expected to keep the Federal Reserve on course to raise interest rates in December for the fourth time this year, despite an escalation of criticism from Trump that tighter monetary policy is starting to slow down the economy.