Erdoğan’s tour of firsts ushers in further growth in ties with Venezuela, Paraguay 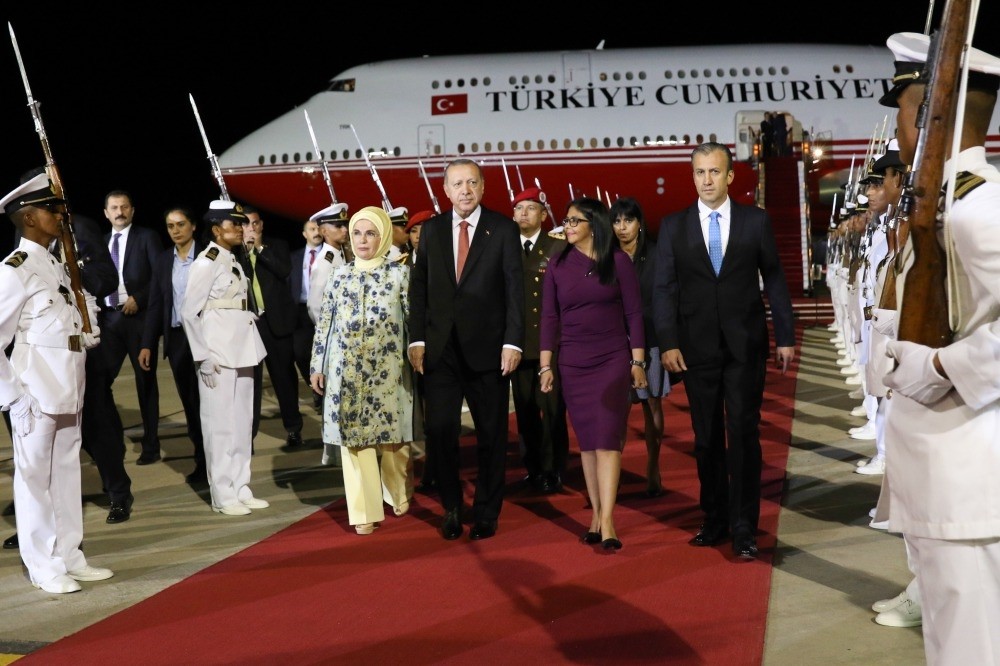 The first presidential visits to Venezuela and Paraguay demonstrate Turkey's commitment to increasing its partners around the world in political, economic and cultural matters

After a busy schedule at the two-day G20 summit in Buenos Aires, Argentina, President Recep Tayyip Erdoğan extended his stay in Latin America to pay an official visit to Paraguay and Venezuela within the framework of Turkey's policy of cementing its ties with countries in that region. Erdoğan arrived in Venezuelan capital of Caracas early yesterday and was met at Simon Bolivar Airport in the capital Caracas by Venezuelan Vice President Delcy Rodriguez, Industries and National Production Minister Tareck El Aissami, Foreign Affairs Minister Jorge Arreaza and Defense Minister Vladimir Padrino Lopez. Later in the day, Erdoğan met with his counterpart Nicolas Maduro at Miraflores Palace.

The two leaders were expected to sign several agreements and hold a joint press conference. Ahead of his visit to Venezuela, Erdoğan was in Paraguay late Sunday for official talks and was received by Paraguayan President Mario Abdo Benitez and his wife Silvana Lopez Moreira Bo in a ceremony at the Palacio de los Lopez. Erdoğan's trips to Paraguay and Venezuela mark the first-ever by a Turkish president. Erdoğan's third official visit to the continent aimed at boosting bilateral ties and is a part of Turkey's opening up to Latin America within the framework of the country's multidimensional foreign policy.

Turkey's relations with the region had been friendly but stagnant until the 1990s, mainly due to geographical distance and differences of foreign policy priorities, as the Foreign Ministry defines it.

Late President Süleyman Demirel was the first Turkish president to visit the Latin American region when he paid official visits to Argentina, Brazil and Chile in 1995.

Erdoğan's visits to Mexico, Colombia and Cuba in 2015 marked his first visit to Latin America and the second presidential visit to the region after an interval of 20 years. His second tour took place in 2016 when he visited Chile, Peru and Ecuador. Apart from that, Foreign Minister Mevlüt Çavuşoğlu also visited the region last year, traveling to Argentina, Paraguay, the Dominican Republic and Mexico.

Turkey's multidimensional approach has been demonstrated the clearest economically as it has enabled a boost in trade relations between Turkey and Latin America. Turkey's trade volume with Latin America increased from $3.4 billion in 2006 to $9.2 billion in 2017.

As far as Paraguay and Venezuela are concerned, Turkey has seen a significant increase in bilateral trade with the two countries. Turkey's exports to Venezuela increased by 106.2 percent to $37 million last year, up from $18.1 million the year before. As for Paraguay, Turkey's exports totaled $30 million last year, a 56 percent year-on-year increase from $18.9 million in 2016.

Turkish business diplomacy in the region has also gained momentum over the last few years. The Foreign Economic Relations Board (DEİK) established business councils in a number of countries in the region, including Venezuela in 2012, Brazil in 2007, Mexico in 2008, Argentina in 2012, Ecuador in 2012, Columbia in 2012, Peru in 2012, Chile in 2012 and Cuba in 2016.

Turkey inked its first free trade agreement (FTA) in the region with Chile in 2009. The country aims to sign similar FTA agreements with other Latin American countries, including Ecuador, Colombia, Mexico and Peru, with whom negotiations are underway.

Apart from bilateral trade, there have been remarkable increases in the number of tourists coming to Turkey from Latin America thanks to the popularity of Turkish TV series, which are among the most popular in the continent.

The number of tourists coming from South America, especially from Argentina and Brazil, soared 70 percent to 165,000 in the first eight months of 2018.

Furthermore, the national flag carrier Turkish Airlines (THY) has also increased flight frequencies to the region. The carrier's operations have made a significant contribution to Turkey's economic and trade ties with the region.

Following the official ceremony in Paraguay on Sunday, President Erdoğan and his Paraguayan counterpart Benitez proceeded with a face-to-face meeting. The two leaders agreed to further strengthen bilateral relations during their meeting.

In a joint press release, published following the closed-door meeting, the leaders praised the "strong diplomatic relations between the two countries."

Furthermore, Erdoğan and Benitez also agreed on the first meeting of the Joint Economic Commission, established within the framework of the commercial cooperation agreement between the two countries, to be held in the first half of 2019.

"The two presidents have stressed the importance of multilateral cooperation in the fight against terrorism and cross-border crimes," it added.