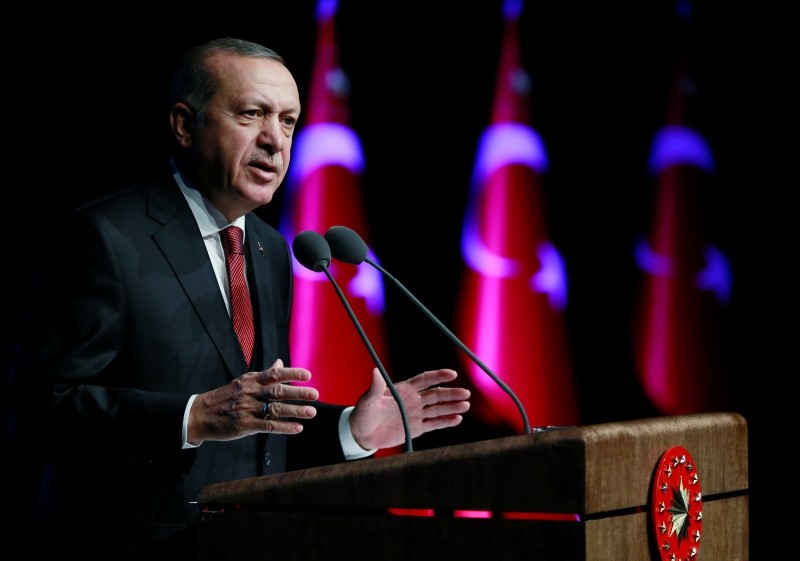 Erdoğan said that the first 100-day action plan has reached a 97 percent realization performance rate despite countless problems with related institutions managing to complete 340 out of 400 items laid out in the plan.

"While we were projecting a TL 43 billion budget for the 400 actions in our plan, we spent TL 37.3 billion for the actions that were completed," Erdoğan said, citing austerity measures.

On Turkey's efforts for development, Erdoğan said the Financial Stability and Development Committee will be established to strengthen financial stability and develop finance sector.

TurkStream is an export gas pipeline set to cross beneath the Black Sea from Russia to Turkey and also further extend to Turkey's borders with neighboring countries.

TurkStream's first line is set to carry 15.75 billion cubic meters (bcm) of natural gas to Turkey. With a second line that goes to Europe, the project will have a capacity of 31.5 bcm per year.

Last month, the last offshore section of a landmark natural gas pipeline was put into place.

Turkey continues its efforts to clear a 1.6M square meter area currently unusable due to mines and unexploded ordnance.

Erdoğan said that units in fight against child labor will be introduced in all 81 provinces. He added that career centers will be established in all universities in the country.

Among the cultural projects of the next 100-day plan, Erdoğan mentioned the restoration of eight additional historical mosques and social complexes.

Also addressing Turkey's fight against Gülenist Terror Group (FETÖ), the group behind the 2016 defeated coup in Turkey, Erdogan said Turkey will deal new blows against foreign financial activities of the terror group in the next 100 days. He added that Turkey will launch new initiatives to disrupt their organizations.

The visa exemption talks with Russia will also be accelerated, he added.

Speaking about international trade, Erdoğan said Turkey has put together two-year action plans with China, India, Mexico and Russia to use national currencies in trade and further develop barter trade.

Deputy judge and deputy prosecutors will be introduced for the first time.

The first 100-day action plan, that was revealed on Aug. 3, included over 1,000 projects and Erdoğan announced 400 of them -- which were most important.

Within the scope of the plan, many projects were announced in several areas such as diplomatic missions, foreign policy, foreign currencies, new markets for exports, research and development centers, free trade zones, and mega projects.

On Thursday, a presidential decree announced the establishment of the country's space agency.

The Turkey Space Agency will prepare and carry out the National Space Program in line with the policies determined by the president of Turkey, according to the decree.

The president said Turkey is taking steps in 12 countries to use local currencies in international trade.

He noted that the country will start working on medium-range cruise missiles and mass production of surface-to-surface bullet project ATMACA.