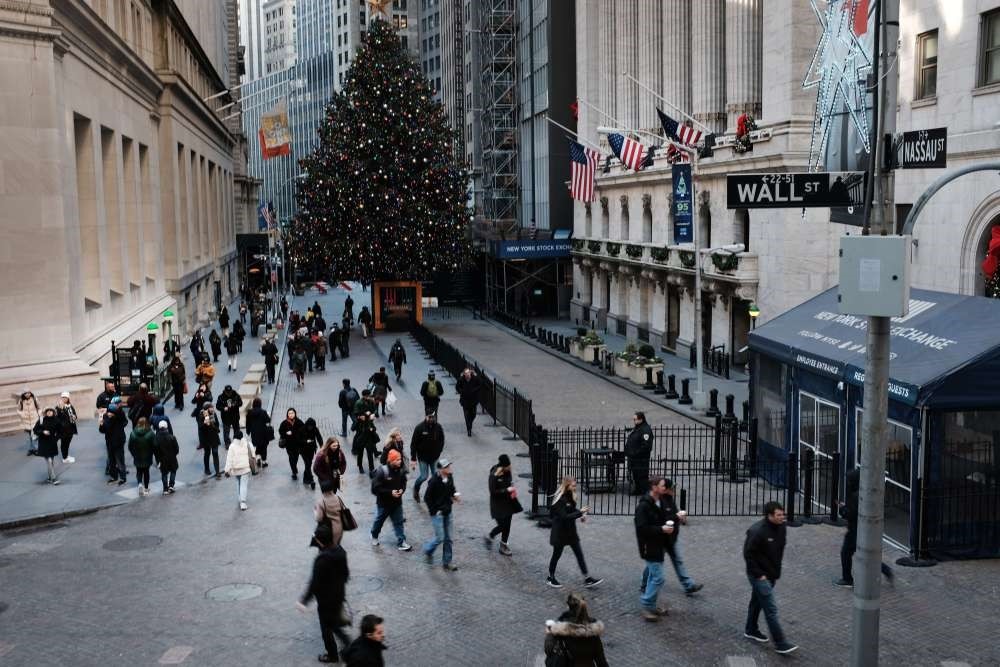 The U.S. economy grew at a solid 3.4 percent annual rate in the third quarter, slightly slower than the previous estimate as consumer spending and exports were revised lower. The economy is expected to slowdown further in the current quarter

The U.S. economy slowed slightly more than previously estimated in the third quarter and momentum appears to have moderated further in the fourth quarter, with new orders and shipments of manufactured capital goods falling in November.

The pace of growth, however, likely remains strong enough to keep the economy on track to achieve the Trump administration's 3 percent target this year. Gross domestic product increased at a 3.4 percent annualized rate, the Commerce Department said on Friday in its third reading of third-quarter GDP growth.

That was slightly down from the 3.5 percent pace estimated last month and well above the economy's growth potential, which economists estimate to be about 2 percent.

The revisions to the third-quarter GDP reading reflected markdowns to consumer spending and exports. There were downward revisions to business spending on equipment and nonresidential structures, as well as residential investment.

Those downward revisions were partially offset by a larger accumulation of inventory than previously estimated. The economy grew at a 4.2 percent pace in the April-June quarter.

The Federal Reserve raised interest rates on Wednesday for the fourth time this year, but forecast fewer rate hikes next year and signaled its tightening cycle is nearing an end in the face of financial market volatility and slowing global growth.

The U.S. central bank slightly lowered its growth projections for 2019.

U.S. financial markets were little moved by the data as investors monitored political developments in Washington, where President Donald Trump threatened a "very long" government shutdown just hours ahead of a midnight deadline.

Growth is being driven by the government's $1.5 trillion tax cut package, which has given consumer spending a jolt. The fiscal stimulus is part of measures adopted by the White House to boost annual growth to 3 percent on a sustainable basis.

But the economy appears to be slowing in the fourth quarter.

Last month's drop in core capital goods orders added to data on the housing market and trade that have flagged a slowdown in economic growth in the October-December quarter.

There were decreases in orders for machinery and for electrical equipment, appliances and components. Orders for computers and electronic products were unchanged in November.

Shipments of core capital goods slipped 0.1 percent in November after an upwardly revised 0.8 percent increase in the prior month. Core capital goods shipments are used to calculate equipment spending in the GDP measurement. They were previously reported to have increased 0.3 percent in October.

Business spending on equipment grew at its slowest pace in nearly two years in the third quarter. It has been slowing despite a lower tax bill for corporations. Some companies including Apple used their tax windfall to buy back shares on a massive scale.

Spending on equipment could remain sluggish as sinking crude prices reduce demand for oil well drilling equipment. Brent crude fell to a more than one-year low of $54.64 per barrel on Thursday amid worries of oversupply.

Economic growth estimates for the fourth quarter are around a 2.9 percent rate. The slowdown in growth is expected to spill over into 2019 as the fiscal stimulus fades and a bitter trade war with China and strong dollar undercut manufacturing.

Inventories increased at an $89.8 billion rate, instead of the $86.6 billion rate estimated in November. Inventory investment added 2.33 percentage points to GDP growth. That was more than the 2.27 percentage points reported last month and was the biggest contribution since the fourth quarter of 2011.

Consumer spending, which accounts for more than two-thirds of U.S. economic activity, increased at a 3.5 percent rate in the third quarter, slightly down from the 3.6 percent rate estimated in November.