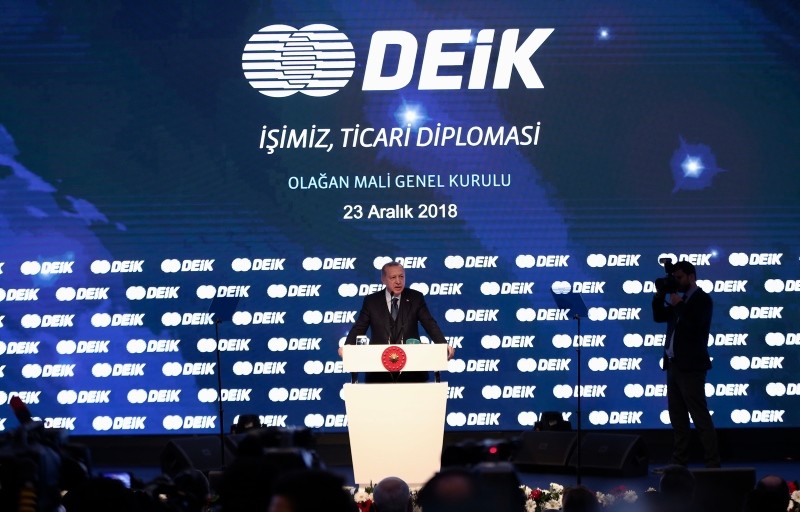 As a result of high-level visits and contact the Turkish government carries out across the world every year, Turkey has a presence in many countries, not only with official missions but also with its businesspeople, companies, products and nongovernmental organizations (NGOs), President Recep Tayyip Erdoğan said.

In his keynote speech at the 2018 Financial General Assembly of the Foreign Economic Relations Board (DEİK) in Istanbul, Erdoğan said with contracting services, TV series, films, health services and culture, Turkey has become visible and recognized all over the world.

The president noted that during their visits, they are bringing together Turkish businesspeople with the industrialists and businesspeople of those countries.

"As leaders, we want to seriously infuse all businesspeople with the entrepreneurial spirit. We are hosting the heads of state and government in our country on the occasion of both official visits and the international meetings they host," Erdoğan said, recalling that most recently, they brought businesspeople together with Iran's President Hassan Rouhani at the Çankaya Presidential Mansion.

Erdoğan stressed that Turkey has made a name for itself in diplomacy and humanitarian aid, as well as in trade diplomacy, adding almost every statesman they discussed spoke about the success, honesty, dynamism and commitment of Turkish investors.

The president said DEİK has become the driving force of the business world, particularly the exporters, with its new structure and management.

Regarding more than 5,000 different events, including business forums and council meetings, organized by DEİK since January 2016 as an indicator of the acceleration achieved in the process, Erdoğan said the fact that 63 of Turkey's 100 largest companies, 28 of its 46 largest international contracting companies and 21 of its 70 biggest exporter companies are members of DEİK is an indicator of this success.

He expressed his belief that DEİK will maintain this momentum next year, raising the bar to a much higher level. Urging the attendees to carry Turkey's economic power from the region to the whole world in 2019, Erdoğan suggested that besides serving as an executive board, DEİK should also carry out intellectual practices that will widen people's inner worlds and lead the way, adding that it should also generate reports on strategies for foreign economic relations, ensure their implementation and closely monitor the results. "I will continue to be with you in your projects in this direction," Erdoğan stressed.

Recalling that they built bridges between Turkish businesspeople by inviting DEİK everywhere they visited, from Africa to South America and made serious efforts to solve the problems of the companies, Erdoğan noted that in the coming period, it is necessary to take a step to expand the horizon by incorporating small and medium-sized enterprises (SMEs) and to make their perspectives much stronger.

Comparing the current levels with the 2002 figures when they first took office, Erdoğan stated that exports rose from $36 billion to $170 billion, while the number of exporter companies doubled from 31,000 to over 71,000, adding that with the regulation they put into effect, they brought green passport facilities to 8,582 exporters, paving the way for visa-free travel to many countries. "We increased Türk Eximbank's capital from TL 3 billion [$560 million] to TL 10 billion," Erdoğan continued. "Last year alone, we provided cash support of over TL 2 billion to our exporters. While only TL 15 billion in direct investments were made in Turkey between 1975 and 2002, we have reached over $201 billion in direct investments over the last 16 years."

Turkey has attracted over $200 billion in foreign direct investment since 2002, official figures show.

The country attracted nearly $7 billion in foreign direct investment in the first eight months of this year and the Presidential Investment Office expects it to reach over $11 billion by the end of the year.

Turkey's exports were up 7.7 percent year-on-year during the January-November period as they reached$154.2 billion. Exports in the last 12 months now stand at $168.1 billion.

The country is very close to ending the year with around $170 billion in exports, an all-time high.

Further in his speech, Erdoğan underlined that Turkey has a very dynamic economy and economic flexibility with very high maneuverability. He said thanks to timely and determined steps, the fluctuation in the markets was replaced with tranquility and normalization.

The president stated that there was a 20 percent improvement in the exchange rate compared to the end of August, thus giving the country a positive outlook compared to many developing countries in this period.

Informing the audience that in the same period, the country's risk premium improved by 225 points, while 17-year government bond interest rates dropped by 460 basis points, Erdoğan said during this fluctuating period, they created their new economy program which will carry the Turkish economy to 2023 and shared it with the public, recalling that they initially aimed to ensure stability and reduce inflation and current account deficit.

"We implemented the All-Out Fight against Inflation in order to reduce the inflation that entered an upward trend due to the fluctuations in the exchange rate," Erdoğan said. "Together with the strong support of our companies, we saw positive developments in price movements in November. By coping with all the bad scenarios, inflation started to decline in November. There were also positive developments with the balancing process in the current account [balance] and foreign trade."

He emphasized that the Turkish economy registered a current account surplus for three months in a row, adding that in this process, the strong course in exports and tourism revenues both supported the growth and reduced the current account deficit.

Noting that the ratio of exports to imports exceeded 95 percent in November, and that thanks to this positive outlook, real sector and economic confidence indices improved by 6 percent and 9 percent, respectively, compared to the previous month, Erdoğan suggested that with this improvement in financial markets and expectations, there will be a really strong increase in the Turkish economy in the coming period.