Minimum wage in Turkey rises to TL 2,020 with 26 percent increase 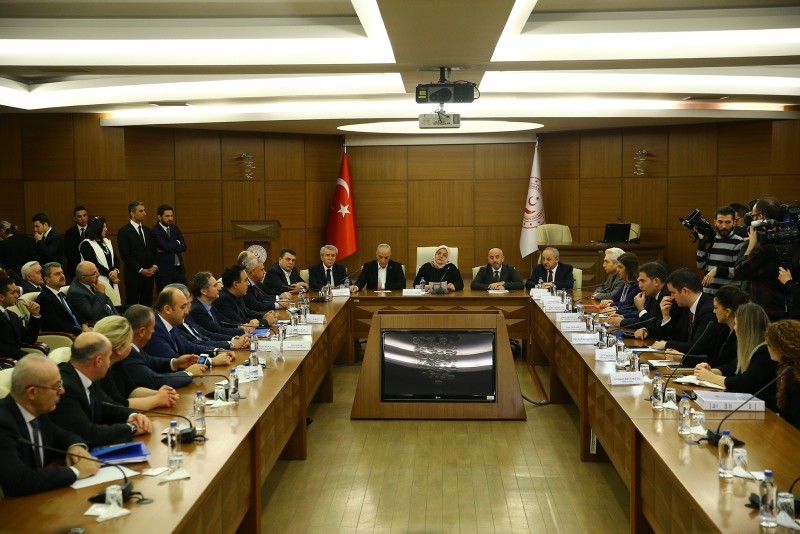 The commission made up of the labor ministry, trade and employer unions decided on minimum wage to be applied in Turkey for 2019 as 2,020 Turkish liras ($380), Family, Labor and Social Services Minister Zehra Zümrüt Selçuk announced Tuesday.

The decision came after the fourth meeting of the Minimum Wage Commission held in capital Ankara. The commission decided to increase the net pay by with a rise of 26 percent from TL 1,603 year-on-year, while the new gross minimum wage, before deductions such as social security premiums and income taxes, is TL 2,558 ($482).

"The minimum wage for married people with three children is 2,155 Turkish liras," she added.

Some 7 million workers are estimated to work on the minimum wage out of a workforce of 29.63 million.

Minister Selçuk said the commission unanimously decided on the minimum wage. Ergün Atalay, the chairman of the Confederation of Turkish Trade Unions (Türk-Iş), the largest trade union in the country representing the workers in commission meetings, said the decision was not "perfect" but "agreeable."

Türk-Iş has been demanding TL 2,000 net minimum wage plus 25 percent inflation raise and prosperity share raise. The consumer price index rose by 21.62 percent year-on-year in November, while the producer price index increased by 38.54 percent. The inflation rate reached a 15-year-high in September at 25 percent. The current raise in minimum wage covers the inflation rate for 2019. However, given the trade unions' earlier demands in 2017 meetings and approximately 40 percent loss of the lira against the dollar, the position of the workers is not bright.

Selçuk previously stated that one of the most important priorities is to increase employment in 2019 while keeping minimum wage in line with the economic conditions, which have been challenging for both parties in 2018. The unemployment rate as of September 2018 stands at 11.4 percent.

The Turkish Confederation of Employer Associations (TISK) representing employers had said that minimum wage proposals exceeding TL 2,000 are not in line with the government's inflation and unemployment goals. TISK General Secretary Akansel Koç said that the minimum wage agreed upon Tuesday was above their expectations and the 15.9 percent inflation goal for 2019 should have been taken into account.

The Turkish Independent Industrialists and Businessmen Association (MÜSIAD) President Abdurrahman Kaan said that the increase in the minimum wage is satisfactory.

The Turkish Industrialists and Businessmen Association (TÜSIAD) President Erol Bilecik also said Wednesday that the increase in the minimum wage was a positive development.

Later on Tuesday, President Recep Tayyip Erdoğan told the ruling Justice and Development (AK Party) parliamentary group that the state will cover the social security premiums and taxes of workers hired for the first time in 2019 and 2020 based on the minimum wage. He added that the TL 101 subsidy given for the first nine months of 2018 will be applied for 12 months next year for businesses employing 500 people and over. For business employing fewer than 500 people, this subsidy will be applied as TL 150, he added.

In the third meeting of the commission in capital Ankara Dec. 20, the Turkish Statistical Institute (TurkStat) shared its average findings as 2,213.40 Turkish liras ($420) for heavy-duty-status jobs, TL 1,978.80 for medium-status jobs and TL 1,841.40 for light-status jobs.

Treasury and Finance Minister Berat Albayrak previously said that strong recovery has begun in inflation and the decreasing trend will continue. However, projections by economists show that inflation will continue to remain near the 20-percent level at least for the first half of 2019.

The left-wing Confederation of Progressive Trade Unions (DISK) demanded the minimum wage to be increased to TL 2,800. The conservative Confederation of Turkish Real Trade Unions (Hak-Iş) has not disclosed an exact number, but Hak-Iş officials previously stated that the Türk-Iş limit to start negotiations at TL 2,200 is low and should be higher.

The main opposition Republican People's Party (CHP) has demanded the minimum wage to be at least TL 2,200 and pledged to implement this rate in all CHP-run municipalities as of January 2019.