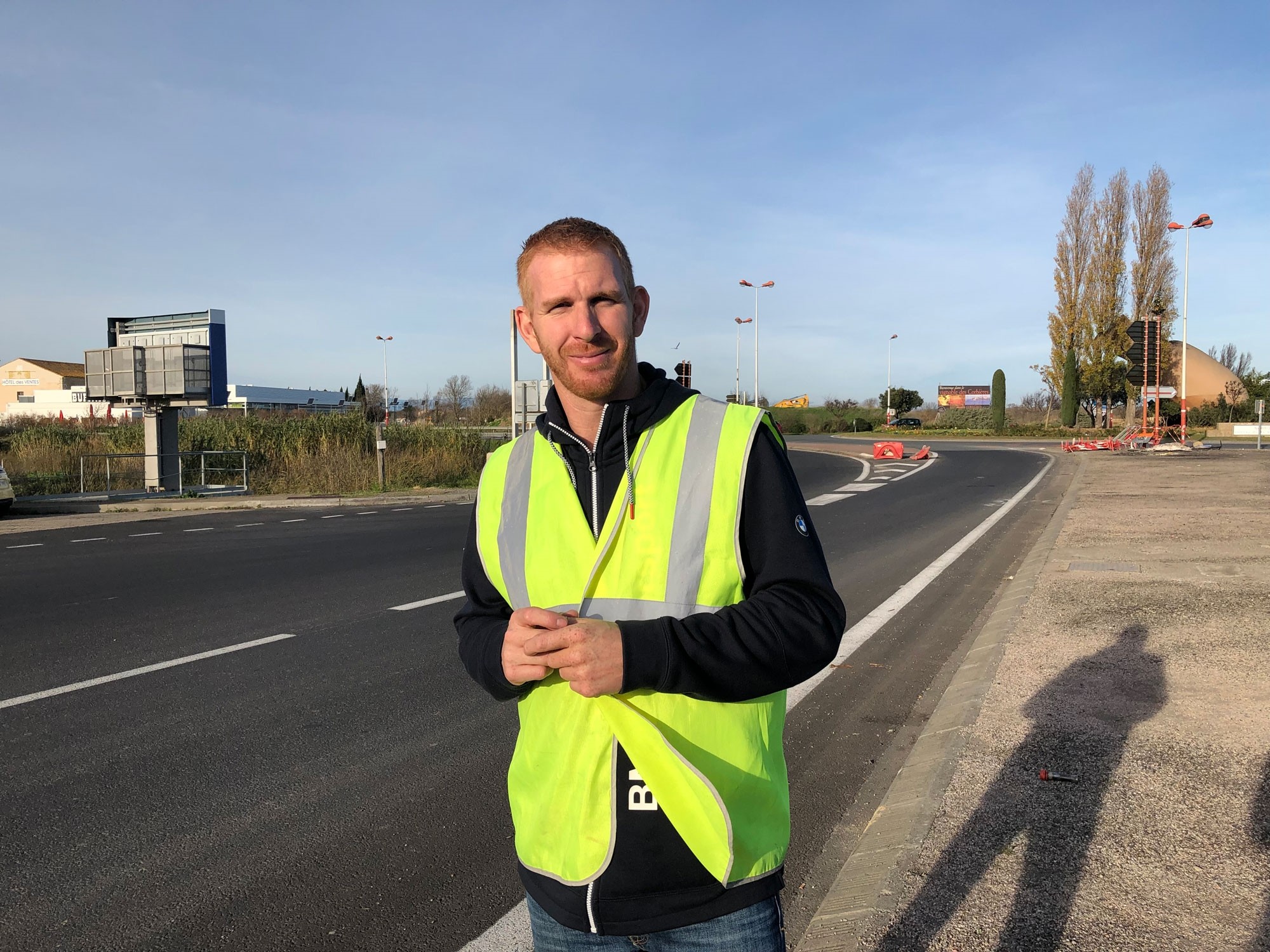 Ghislain Coutard, the u201cvestmanu201d on a highway while trying to gather signatures for a proposed referendum (Photographs taken by Emre Bau015faran)
by Emre Başaran Dec 27, 2018 12:00 am

The man who came up with the idea of using the hugely popular yellow vest symbol in the uprising against Macron and his government gives an exclusive interview to Daily Sabah regarding the movement’s demands, their criticism of the head of state and the future of France. An “actor” in the eyes of the protesters, the president faces a vague political future in the embattled country

This weekend, I embarked on a journey to a small and beautiful town in the south of France, a country recently bruised by vandalism, economic hardships and an unwavering fury against President Emmanuel Macron.

My main goal was to meet Ghislain Coutard, the guy who first came up with the well-known symbol of the uprising. A couple messages later, my plan was solidified, and I packed for Narbonne.

The story behind the symbol

"While working, I often have the vest on, as wearing one is obligatory. When my shift is over, I take it off and put it behind the front window of the car. I saw that many other people were doing this too, and I thought it was highly visible and could be used as a color code easily," Coutard explained in his southern accented French. "That's truly impressive how the symbol took off, and many people embraced it in a short time."

By the end of October, the young worker published a video on Facebook in which he called on people to use the yellow vest as a symbol of solidarity. The video went heavily viral, gathering more than five million views in a short time, gaining him the nickname "Giletman," meaning "Vestman." 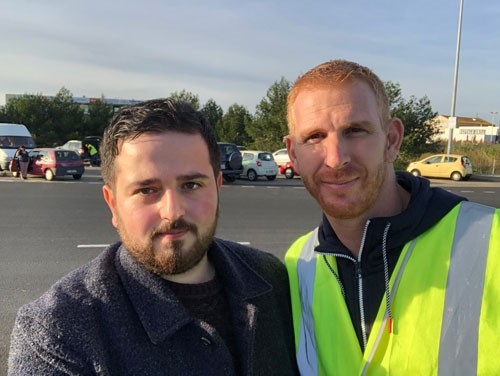 "There are thousands and thousands of people on the streets all across France. That indicates phenomenal power," he said.

The president of the rich

"That's not jealousy, but as the middle class, we make efforts that the rich do not," Coutard went on. Underlining the inequality when it comes to the French state's taxing of rich and poor, he added that the ratio is not "normal at all."

"His posture, his attitude, and everything about him… He is trying to show he is superior," the mechanic said regarding President Macron. "He is arrogant. His arrogance manifests itself in both his appearance and the words he uses."

Then his girlfriend Vanessa took the stage.

"Any president on the planet would instantly give a speech to calm the crowds a little bit. But Macron waited for a solid month until he uttered a single word regarding the protests," she said, also implying that his attitude was totally ruthless. "It is now too late for him to do anything for reconciliation." 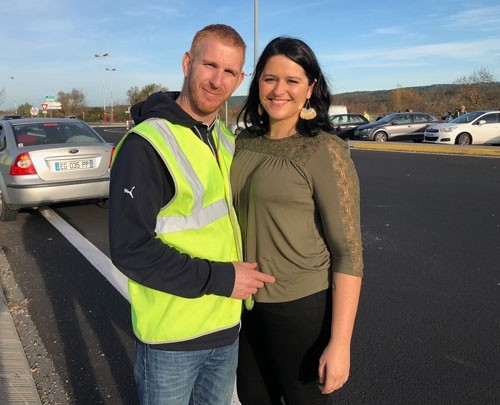 Coutard with his girlfriend Vanessa on the highway

"He has an answer for every criticism," Vanessa added.

"There is a gross difference between the president and his people," she continued, explaining that Macron does not reflect the reality of the ordinary French. "He denigrates the people."

The couple went on to say that everything about the president and his spouse Brigitte feels pretentious, artificial and unnatural.

"He is living in a different realm," Ghislain Coutard said with a slight undertone of anger in his voice. "He is an actor. He is arrogant, and so is his wife."

"You don't like his attitude at all then?" I asked him.

"No, no, not at all. It is as though we are living in a film, and he is the main actor. He is superficial, his words seem like they have been scripted and feel like they have been taken from a scenario. Everything he does, he purports to be too perfect, and he seems totally unrealistic."

"He has confidence based on money and his power," he added.

His girlfriend chimed in, "He is totally arrogant and superficial, but he also acts like he cares about us and supports us. He laughs, acts and feels unauthentic."

"He is trying to control his mimics and the words he says. He is just acting. That's all," she said.

While I was wandering around the streets of Marseille and Narbonne, three letters caught my attention. "RIC," which turns out to be the abbreviation of "Le référendum d'initiative citoyenne," (The Citizens' Initiative Referendum) – a proposed process reminiscent of the popular votes conducted when making an important decision in countries like Switzerland where the direct form of democracy applies.

"In this type of governance, the state asks for its citizens' advice prior to making any major decisions. And the yellow vests want just that," Ghislain explained.

Then we got in the car and went to a highway just outside Narbonne to observe the efforts to realize such a referendum.

Protesters try to gather signatures on a highway in Narbonne, southern France for a comprehensive referendum on change in governance. Read the exclusive story behind the yellow vest symbol:https://t.co/dp8MGUE5md pic.twitter.com/8xUwMz2FVj

Under the blazing sun of the Mediterranean, which doesn't shine all the time in the middle of the winter, the protesters fight for their cause. 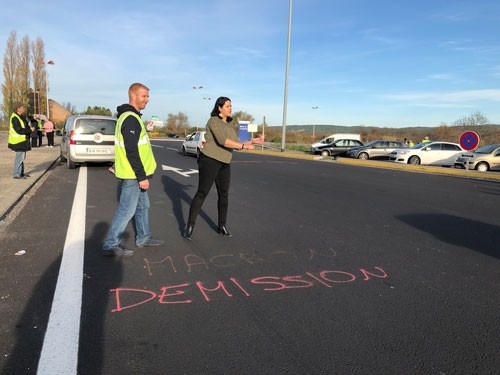 Putting up a placard reading "Sign the RIC," the yellow vests asked the drivers to stop and give support to the demand of the movement. 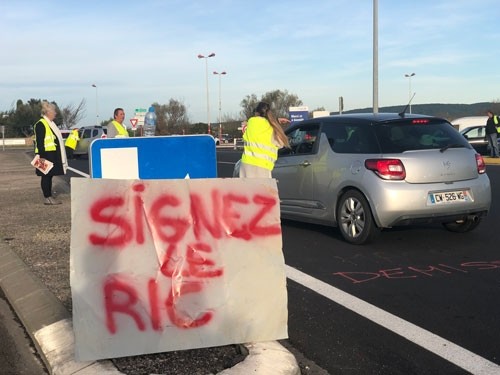 According to the form I have read, there are four types of RIC: Constituent, legislative, revocatory and repealing. "People have the power to manage themselves," Coutard replied to my question as to whether the ultimate aim of the proposed referendum is to change the president. 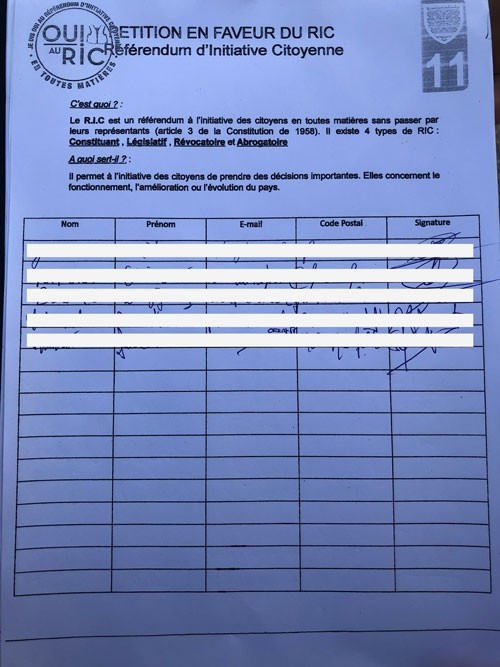 The form of the proposed "RIC" with several signatures

"We want the government to ask us our opinion when they make a very important decision," his girlfriend added.

"Why don't you demand another election, but insist on a referendum?" I asked the couple.

"Every five years we get to vote and that's all," Ghislain said, adding that the European elections are nearing, but there are still three more years for the next election in France, adding that a fundamental change to the electoral system is vital. 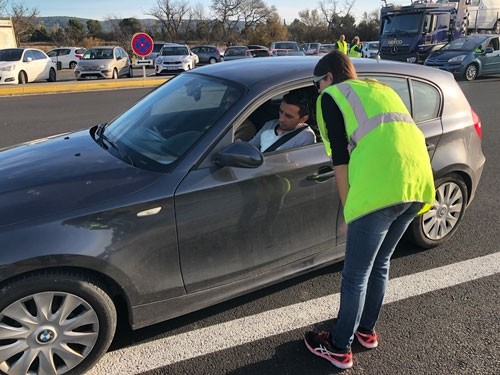 A driver signing the petition handed over by a yellow vest

When I asked the couple what they want from the government first and foremost, the answer came from Ghislain.

"We are the country whose citizens are the most taxed on the planet," added Ghislain with a bit of a sorrow. "If you want to live on a minimum, you should at least make 1,700 euros per month. And that would suffice only to survive," the young mechanic says, adding that at least 2,000 euros would be required to live with dignity in a country where the minimum wage is just below 1,500. "Tax, tax, tax," he uttered with clear frustration, adding that purchasing power suffers in the country.

"If we make 3,000 per month, that would be alright for us," he added. Then Vanessa interrupted, stating that approximately 1,500 euros of minimum wage, let alone families with children, is barely enough for the survival of a single person.

"There is a thing that strongly divides the French people, and that is unemployment pay," Ghislain went on to say. "I work hard to earn 1,800 euros per month. But the state grants unemployment pay for two years."

"They benefit from the system," Vanessa added. "There are people who make 2,500 euros per month," she continued, saying that these people take advantage of receiving more than one allocation or financial assistance every month.

"Allocations from the government?" I asked.

"Yes, that's it," he replied. "The middle class is the one with people working the hardest and paying the most. And these people exploit governmental assistance."

"France shuttles between the far-right and far-left," Vanessa added, underlining the shortage of options.

"That's why the RIC is needed," Ghislain went on. When I asked the couple if a party right in the middle of politics is required in the country, he said yes, adding that Macron is "in fact the continuity" of former President François Hollande.

Vanessa said that even though Hollande comes from the left, he leaned more and more to the right before the end of his tenure, which made people believe that Macron is neither a right-winger nor a left-winger. "Macron says, 'I am neutral, I am in the center of politics'," Ghislain added. "Neutral but still a right-winger," his girlfriend added.

"Neutral for the rich people?" I asked. "Yes," the couple replied.

"When a problem happens, he does not speak, he does not act, he just orders his prime minister to do the talking, but he does not appear anywhere himself," Vanessa said. "The country is burning. But he just continues to do the stuff he always does," Ghislain asserted.

"That's not normal at all. That's a weird man."

"He has a bizarre attitude," Vanessa added.

The future of the yellow vests

"Do you think that this movement will cause a change in governance or even a revolution?" I asked the couple.

"We still need many more people to join," Vanessa said regarding the movement's potential.

"We are trying to succeed, and to do our best," Ghislain added. "Maybe it will help change something, don't you think?" I asked. "It is Noel time now, and there are celebrations."

He added that this time of the year is a chance for the movement.

"If we make it to the first of January with that strength, our movement will explode," he said, expressing his hopes for 2019.

"If we want a concrete change in governance, we still need many more people to join," Vanessa concluded. "We need more people on the streets."

While walking on the boulevards of Marseille, a metropolitan area close to Narbonne, I encountered many people carrying signs saying, "Donnez le pouvoir au peuple," meaning "Give the power to the people." I asked the couple whether that means a demand for a referendum or anything else.

"More people need to express their opinions," Vanessa said, adding that a referendum is indeed crucial, but the meaning of those signs reach is far beyond a vote.

Before going to France, I had a solid question in mind: How do the yellow vests explain the vandalism in Paris?

I asked that question to the first yellow vest, and he gave the much-expected answer, "Because of the anger."

Vanessa later went on to say that police violence, including the use of teargas, is also a contributing factor.

During the six round of protests with violent encounters between demonstrators and the police force, at least 220 people were arrested, including 142 in Paris, and 10 fatalities overall were reported. 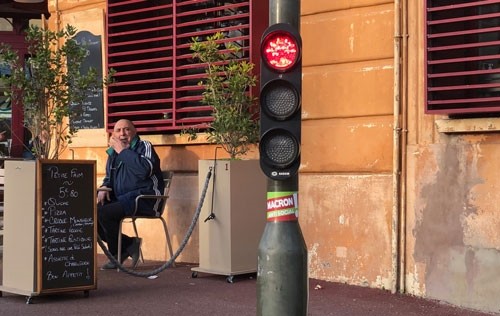 Meeting new people and hearing their stories are always amusing. But in a time period very troubling for France and the government led by Macron, this experience was more and more of an eye opener.

Seeing the anger in the eyes of the ordinary French, I think the future carries a lot of surprises for the country.

And it seems a little grim for Macron.