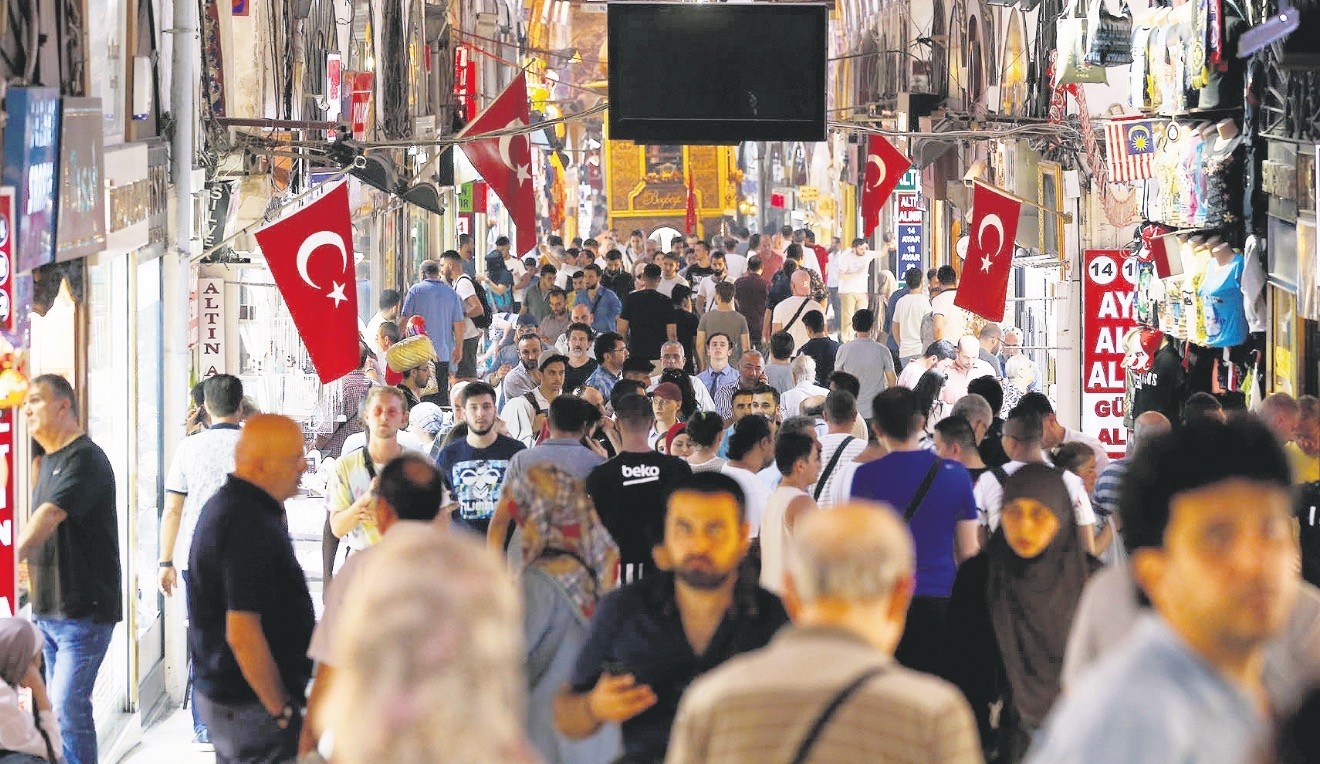 Stepping into 2019 and leaving behind a rough year full of stormy events, the Turkish business world agrees that the new year will be a balancing period. Economists, on the other hand, expect a decline in inflation and the current account deficit to maintain a downward trend, with growth becoming more apparent in the second half of the new year. Turkey was not exempt from the global volatility and external shocks, which have been exacerbated by political moves in the summer period in 2018. Representatives of leading business organizations assert that Turkey will leave the economic slowdown behind with the help of structural reforms along with targeted measures and incentives in 2019, a year that is expected to be shaped by developments in the global economy. With figures pointing to sustainable growth throughout the year, exports, one of the major contributors to the Turkish economy, were most probably the biggest sensation of the past year. Once the figures for the last month of 2018 are released, exports are expected to end the year on a high note and hit an all-time high.

It is particularly important because Turkey looks to drive its economy mainly by exports in the upcoming period. Besides a further increase in exports in 2019, the government also expects the export-import coverage ratio to rise, as well as the continuing downward trend in the current account deficit.

EXPORTS TO FUEL GROWTH AGAIN IN 2019

Turkey's exports saw monthly increases during the January-November period as they reached $154.2 billion, with a 7.7 percent increase compared to the same period of last year. Exports in the last 12 months stood at $168.1 billion.

The government expects to reach the year-end export goal of $170 billion noted in the country's New Economic Program (NEP), which was announced in September.

According to the Turkish Statistical Institute (TurkStat), Turkey's exports hit an all-time high of $157.6 billion in 2014. They amounted to nearly $157 billion last year.

İsmail Gülle, chairman of the Turkish Exporters Assembly (TİM), was cited by Anadolu Agency (AA) as saying that exporters hope Turkish exports will reach $200 billion-plus within a few years.

Indicating that exports will fuel growth again in 2019, Gülle said firm steps were being taken toward Turkey's 2023 export targets through ramping up innovation, research, development (R&D), design, and branding.

Gülle said they will hit the road toward $182 billion in exports in 2019, as noted in the NEP.The biggest threat ahead, according to Gülle, is the trade wars between the United States and China. "Further deepening of the trade wars with the participation of other countries is also on the agenda," he said. "As an umbrella group of 72,000 exporters, we are looking ahead to our country's future with hope," he noted.

Head of the Foreign Economic Relations Board (DEİK), Nail Olpak, predicted that Turkey's new economic program based on stabilization, discipline, and transformation will enjoy long-term success.

"We believe that our economy will show its real capacity by mobilizing all our opportunities with determination and dedication," he said.

Speaking at Anadolu Agency's Finance Desk in late December, the head of the Turkish Industrialists and Businessmen Association (TÜSİAD), Erol Bilecik, noted that measures taken by the government so far have been "exceptionally positive," adding that speculative attacks on the government in August were overcome by incentives.

"The business circle is satisfied with the incentives provided by the government," Bilecik said. He also emphasized that global developments in 2019 will be "time saver" for developing countries to solve their problems.

"We should make good use of this time. Sustainable higher growth will be very important in 2019," he continued. "We will experience a period which will require some patience in 2019. But in the long term, Turkey has the capacity to get back to those grand days. We have no doubt of it."

Erdal Bahçivan, head of the Istanbul Chamber of Industry (İSO), said the country had generated a new economic agenda of stabilization and recovery. "I'm sure that in the coming months, various alternative financing models will be introduced in order to support value-added and technological investments which will help reduce Turkey's current account gap," Bahçivan said.

The slowing but positive growth in the third quarter, despite a turbulent period in the said period, both locally and globally, pointed to the launch of a balancing period while featuring the impact of measures taken during the tumultuous summer.

BALANCING PERIOD FOR TURKISH ECONOMY IN 2019

Şekib Avdagiç, chairman of the Istanbul Chamber of Commerce (İTO), said, "In 2019 we will see the results of rebalancing and stability processes." Businesspeople are optimistic about 2019, which will be a year of gains for manufacturers, he added.

Hasan Ali Cesur, chair of the Anatolian Businessmen's Association (ASKON), stressed that as of the end of 2018, Turkey entered a balancing period. In this new period, Turkey will fight inflation, high interest rates, and the current deficit, and it has the power to meet these targets, he said, pointing to Turkey as a magnet for investors with its geographic and strategic position.

"Last year Turkey grew, despite all of the problems," Cesur noted, adding that the country is continuing to grow with its young population and stable economy.

On the other hand, Orhan Turan, head of the Turkish Enterprise and Business Confederation (TÜRKONFED), said uncertainties need to be cut sharply to protect Turkey's financial market from fluctuations.

"The regularity of cash flow carries vital importance for small and medium-sized enterprises (SMEs), the engine of the economy, and reducing problems to access financing makes them stronger," he said.

As for the economists, they expect the decline in inflation and current account deficit to continue in 2019, with emphasis that the growth will become more evident in the second half of the year.

Turkey Macro View Consulting Executive Director İnanç Sözer said 2018 has been left behind in Turkey as an extremely challenging year from the macroeconomic point of view.

have left their place to the normalization process thanks to the monetary and fiscal policies taken as of the middle of August.

"Thanks to the measures taken under the leadership of our government, we say that the worst-case scenario in financial markets has been left behind since September and that the difficulties in the real sector will soon be replaced by the recovery phase. We foresee that 25 percent of inflation will not be seen again in the foreseeable future," he noted.

With its potential and dynamic flexible demand, Sözer said, Turkey will reach the low single-digit inflation as other competitor countries.

Indicating that bringing inflation down to single-digits is the country's primary objective, he underscored once it is achieved and sustainable growth is supported by structural reforms, a natural process will come along.

Meanwhile, with the commitment to the monetary policy, tax cuts, and nationwide anti-inflation discount campaigns launched by the Treasury and Finance Ministry, inflation registered a 1.44 percent drop in November, beating expectations.

Year-on-year inflation stood at 21.62 percent in November, according to the Turkish Statistical Institute (TurkStat) data. The annual consumer prices reached a peak in October, hitting 25.24 percent.

Inflation had eased as the Turkish lira recovered in recent months after a massive 6.25 percentage point rate hike by the Central Bank of the Republic of Turkey (CBRT) in September and an improvement in relations with the U.S.

After hitting a low of around TL 7.20 to the dollar in August, the Turkish currency has steadily recovered. The lira has recouped some of its losses since August and spiked against the U.S. dollar by 20 percent, positively decoupling from other emerging market currencies.

On the other hand, Turkey's current account balance reported a higher than expected surplus of $2.77 billion dollars in October, improving from last year's deficit of $3.83 billion, according to the Central Bank of the Republic of Turkey's (CBRT) balance of payments report.

During his speech at an event in mid-December, Treasury and Finance Minister Albayrak said there were strong signs showing that the current accounts would further improve in November and December with the 12-month rolling deficit expected to fall below $30 billion.

According to the NEP, Turkey Macro View Consulting Executive Director Sözer said they expect 2019 to be a year of balancing, discipline, and transformation.

In this respect, he noted, they foresee the current account deficit to be lower than in 2018 and thus, by decreasing inflation, could further improve investors' perceptions, adding that they believe the Turkish economy will be among the positively dissociated countries in the global economy as of the second half of 2019.

Emphasizing that Turkey went through a difficult period in 2018, Garanti Bank Deputy Chief Economist Seda Güler Mert said in this respect, they think 2019 will be a stabilization year for the Turkish economy and a year of correction in terms of financial variables.

Mert noted that 2018 growth is expected to be around 3 percent, adding that 2019 might be a bit more challenging but expects the recovery to begin as of the second quarter. She suggested that the growth could become more apparent in the second half of 2019 with the support of base effects, adding that their 2019 growth expectation was around 1 percent.

After closing 2018 with inflation of around 21 percent, she noted, even though there would be limited upward effects in the first quarter of 2019, the year could be ended with inflation close to 16 percent with both gains in the exchange rates and lagged effects of the slowdown in growth.

The deputy chief economist remarked that 2018 could be closed with a current account deficit of $30 billion, while the annual deficit may reduce to $16 billion in 2019.