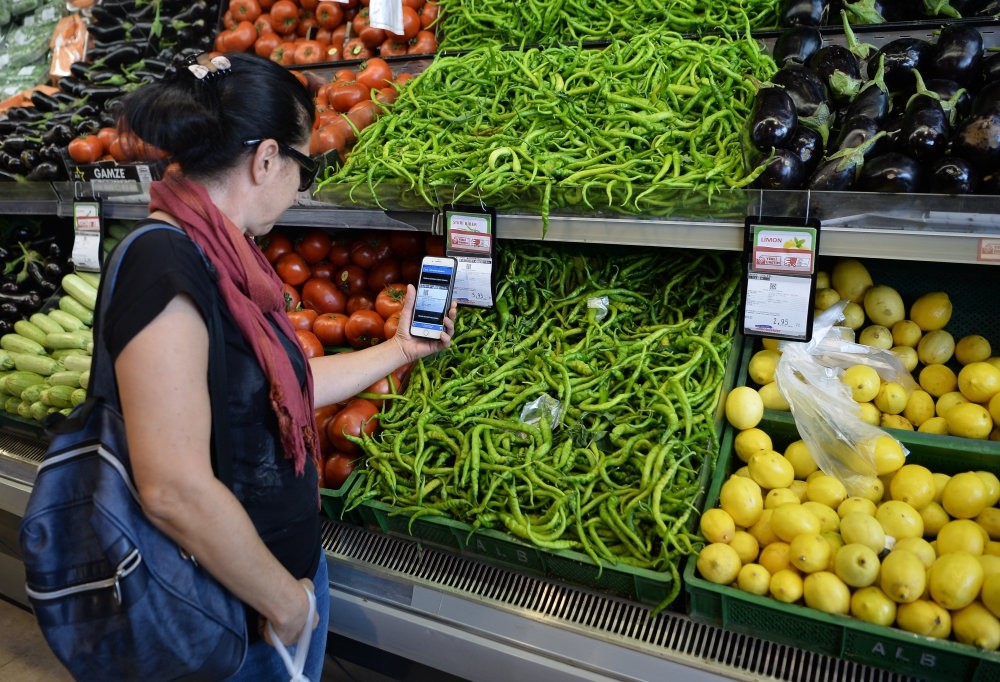 Inflation in Turkey slipped in December 2018 and hit 20.3 percent, the Turkish Statistical Institute (TurkStat) announced yesterday.
by Daily Sabah with AA Jan 04, 2019 12:00 am

A wide set of measures, including tax reductions and private sector campaigns, have allowed consumer prices to preserve their downward trend for the second consecutive month and record a 0.4 percent decrease

Consumer prices in Turkey preserved a downward momentum in December and fell to 20.3 percent, recording a 0.4 percent decrease from 21.62 percent in November, according to data released by the Turkish Statistical Institute (TurkStat) yesterday. Inflation dropped for the second month in a row, in line with the expectations of the government and the markets. Treasury and Finance Minister Berat Albayrak commented on the inflation data and emphasized that the target for consumer prices was achieved in 2019.

"In September, we set the year-end inflation target at 20.8 percent and the figure came at 20.3 percent. This is a very outstanding performance," Minister Albayrak said yesterday.

Minister Albayrak explained that Turkey will show a stronger performance in the 2019 budget in terms of expenses and revenue. The Turkish government brought nearly 6.5 tons of gold to the country's economy with issuances of gold-backed bonds, the minister noted.

About the central bank's decision on interest rates, Albayrak said the bank took the necessary steps by observing the market. The Turkish central bank's policy rate – one-week repo rate – is at 24 percent. On Jan. 16, the bank will hold 2019's first Monetary Policy Committee Meeting, which will determine the interest rates.

The highest annual increase in December was seen in furnishings and household equipment, up 31.36 percent, and in miscellaneous goods and services prices, up 28.80 percent.

TurkStat data showed that none of the main expenditure groups in December saw annually decreases.

Consumer prices over the 12-month average in Turkey saw an increase of 16.33 percent by December last year, according to official data.

Over the past five years, annual inflation hit its lowest level in April 2013, reaching 6.13 percent, and its highest level October 2018, with 25.24 percent.

On a monthly basis, among the main expenditure groups the highest increase was in food and non-alcoholic beverages with a 1.11 percent rise while the highest decrease was in clothing and footwear with 4.08 percent decline.

The all-out fight against inflation initiative that Minister Albayrak announced in October facilitated the reduction of inflation with the expansive support of the public and private sector. The number of corporations and institutions that participated in the program by reducing their prices has exceeded 25,000 by the latest numbers.

Furthermore, in addition to mitigate the inflationary pressures, the treasury and finance ministry also announced tax reductions in the sales of properties, furniture, automotive and home appliances at the end of the October.

Economists highlighted that the positively decoupling lira, falling energy prices and tax reductions have led to decrease in the annual inflation and this trend will be maintained this year. QNB Finansinvest Chiefeconomist Burak Kanlı suggested that the spike in the Turkish lira and dropping energy prices as well as the decreasing domestic demand enabled the fall in the inflation.

"Inflation will hover around 20 percent in the first half of 2019 and will start to see sharp decrease by June," Kanlı said, expressing his expectation for a decrease in the interest rates by the central bank.

Noting that food prices contribute to the limited reduction in inflation, Bürümcekçi said the exchange rate decline in other non-food groups and tax cuts lead to price decreases or lower price increases.

ssed food prices, adding that headline inflation might follow a horizontal course in the first quarter after tax cuts are deferred.

"The annual inflation rate may be around 19-20 percent with the tax cuts extended to three months against the negative base effect in the first quarter," he continued. "However, when taxes are brought back to their previous level after the local elections, inflation seems to rise slightly and close the year in the 16-17 percent range if there is no new currency shock."

He pointed out that the significant slowdown in economic activity with the noteworthy reduction in inflation and the continued decline in exchange rates and fuel prices will increase the interest rate cut pressures on the bank for the March meeting, which will take place before the local elections. Even if not at this meeting, Bürümcekçi suggested that what is important is that the Central Bank of Republic of Turkey (CBRT) continues to monitor inflation rates and their impact on inflation expectations and avoids acting in the direction of loosening without any apparent deterioration in pricing behavior.

"However, past experiences remind us that when the risks on growth increase, the bank can act asymmetrically in the direction of loosening," he added.

İş Yatırım Securities Research Director Muammer Kömürcüoğlu also stressed that the extension of tax reductions and the full-scale fight against inflation program until the end of the first quarter this year will help the inflation stand around 19 to 20 percent. "In accordance with the way the domestic demand navigates for, it is possible that inflation might fall to 18 percent," Kömürcüoğlu said.

Due to high producer prices, inflation is likely to remain high in the first half of the year. But the slowing economic activity and the base effect will lead to a significant fall in the second half, therefore the consumer prices might fall to 16 percent Kömürcüoğlu explained.

Economists also argue that the CBRT will start curbing interest rates in the second half of the year due to the positive outlook in inflation and the rate of diminishing domestic demand.