Pakistan aims to cement ties with Turkey to fuel development 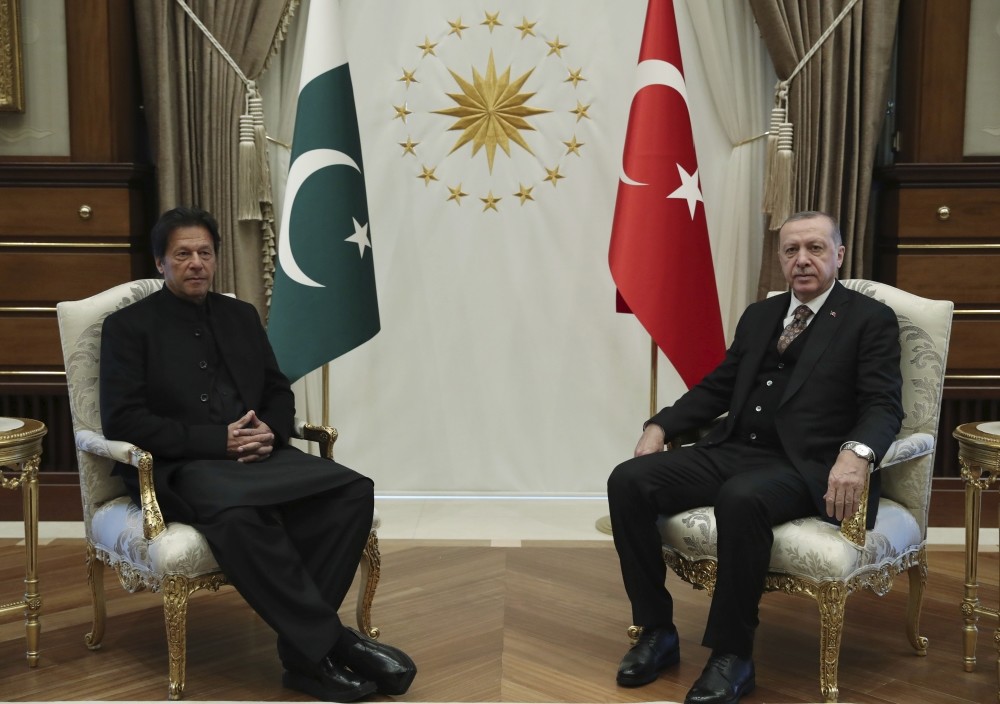 The strong relationship between Turkey and Pakistan is expected to facilitate strong cooperation between the two countries, particularly in the economy, as the Pakistani government looks to learn from the Turkish experience of social and economic development

Enjoying nearly century-old diplomatic ties and looking to enhance commercial and economic relations, Turkey and Pakistan have once more pledged allegiance to one another during Pakistani Prime Minister Imran Khan's visit to Ankara on Friday.

With a view to taking a concrete step toward cementing Turkish-Pakistani relations, the foreign ministries of the two countries will immediately start working on the establishment of a high-level strategic cooperation council, President Recep Tayyip Erdoğan said Friday at a joint press conference with Prime Minister Khan.

President Erdoğan also announced that Turkey, Pakistan and Afghanistan will hold a trilateral summit in Istanbul as soon as Turkish local elections are concluded in March. During his speech, President Erdoğan also encouraged Turkish businesspeople to invest in Pakistan. Moreover, in an attempt to reinforce its development efforts and enhance its health, justice and agriculture sector, Khan said Pakistan is looking to cement bilateral ties with Turkey, which sets an inspiring development model for aspiring developing nations.

Pakistani Prime Minister Khan also noted his country's plans to develop much-needed housing in certain areas and asked for Turkey's experience and know-how in the sector.

"We have a very ambitious plan to lift our economy by building 5 million houses in the next 5 years. We know that Turkey has construction companies with great experience, building 2-3M houses in the last 6-7 years. Inshallah we'll learn from your experience," he said.Accompanied by a high-level delegation, Khan arrived in Turkey on Thursday on a two-day official visit to further improve bilateral ties between the two countries.

Khan's trip came at the invitation from President Recep Tayyip Erdoğan. It was his first visit to Turkey since he came to power in August following last summer's parliamentary elections.

It is time for Ankara and Islamabad to take their bilateral trade to a higher level, Pakistan's prime minister said late Thursday.

"I've brought my team with me because now's the time to enhance the trade volume between Pakistan and Turkey," Imran Khan told a working dinner co-organized by the Turkish Union of Chambers and Commodity Exchanges (TOBB) and Pakistan's Embassy in Ankara.

The bilateral trade volume currently falls short for a number of reasons, including the distance between the countries, said Khan in his address at the working dinner.

"I think this issue will be solved in the coming years, because a huge development is taking place in Pakistan, namely the Chinese 'Belt Road' ('One Belt, One Road') initiative," he noted.

He added that the project would allow Pakistan to forge connections with countries it has been unable to before.

The $64 billion "One Belt One Road" project aims to connect northwest China to Pakistan's southwestern Gwadar port through a network of roads, railways and pipelines to transport cargo, oil, and gas.

Noting Pakistan's huge potential in many areas, he added the country boasts "huge mineral reserves" such as natural gas, copper, and cobalt but that these areas have been neglected.

Khan added that his government's initiatives promise to make investments from Turkey "much easier" as well.

"I want to assure you that this government's aim is to make it easy for investors. Make a lot of people make money and make profits," he added.

Within the scope of his visit, Khan on Friday also came together with Agriculture and Forestry Minister Bekir Pakdemirli in the capital of Ankara.

Pakdemirli emphasized that cooperation with the friendly and brotherly country Pakistan could be made in all fields of agriculture.

The minister also noted he thinks the two countries have significant potential in the field of milk and dairy products, chickpeas, lentils, tea, olive oil, sugar and chocolate.

"I also believe that it is important that the representatives of our countries come together, meet and do business together. We are ranked 7th in the world in agricultural produce. We are in a particularly good position in terms of technical knowledge and technology," Pekdemirli added.

The minister underlined that Turkey was in a good situation in terms of water resources, indicating that the country generally benefits from rainwater and rivers.

By giving great importance to investments in irrigation and technology, Turkey has aimed to increase its agricultural production volume by 30 percent, according to the minister.

"Turkey can provide technical support for irrigation investments to Pakistan," Pekdemirli said, adding that in the upcoming period, they would like to visit Pakistan together with businessmen to discuss business opportunities.

On the other hand, Pakistani Prime Minister Khan said the reflection of good relations between the two countries on the agricultural field was important, noting that Turkey was in a very good position in the field.

"Our country also has a great potential in agriculture and livestock. We expect support from Turkey, especially in the issues of irrigation, food processing, and increasing halal meat and agricultural productivity," Khan stressed.

Earlier Friday, Khan also met Health Minister Fahrettin Koca. During the meeting, Khan said Pakistan and Turkey have agreed to cooperate in the field of health by setting up a task force.

During the meeting, Khan and Koca discussed ways of cooperation on health tourism, city hospitals, medication and production of medical devices as well as technology transfer.

Khan said a task force will be set up for authorities from both countries to work in cooperation on Turkey's transformation model in health that it currently implements, hospitals built in public-private partnership and medication and medical devices.

Koca, on the other hand, hailed the country's transformation model in health, saying it enables all the people to have access to health services.

Ankara and Islamabad have long been part of different pacts and have boosted their cooperation in the economy, defense, health, and energy sectors in recent years.

In October, Pakistan Navy commissioned a 17,000-ton fleet tanker that it has built in collaboration with a Turkish defense contractor, STM.

Pakistan is also set to receive 30 T129 Advanced Attack and Tactical Reconnaissance (ATAK) helicopters from Turkey under a deal finalized in July 2018. The helicopters, specifically designed for attack and reconnaissance, will be delivered gradually over five years.

In July 2018, Ankara won a multibillion-dollar tender to supply four corvettes to Pakistan Navy, a deal dubbed as one of the biggest exports for Turkey's defense industry in history. According to the agreement, two ships will be built in Istanbul and two others in Karachi.

Ankara and Islamabad seem to have yet to exploited the actual potential of trade cooperation between them. The current trade volume between the two countries currently stands at $700 million.

With the sale of ATAK helicopters and MİLGEM corvettes to be concluded in the next couple of years, billions of dollars will be added to export figures, which exceeded $400 million in the first 11 months of last year.

According to Turkish Statistical Institute (TurkStat) data, Turkey's exports to Pakistan have considerably risen over the past decade, to $352 million in 2017 from $155 million in 2008.

Meanwhile, Turkey's imports from Pakistan have declined to $323 million from $586 million in the same period, a 45 percent fall. Pakistan's exports to Turkey peaked at $873 million in 2011, while a downward trend prevailed over the following years.

Turkey's exports to Pakistan amounted to $415 million in the first 11 months last year, marking the highest export figure to this country over the past decade. Also, imports from Pakistan stood at $305 million.

In the meantime, a leading Turkish company Zorlu Enerji Holding last year set up a 100-megawatt solar project at Quaid-e-Azam Solar Park in the Bahawalpur district of Punjab – the largest province of Pakistan.

In November last year, the Coca Cola company from Turkey announced to make future investments of $200 million in the next 2-3 years in Pakistan.

In the health sector, the Recep Tayyip Erdoğan Hospital Trust – a trust in Pakistan named after the Turkish President – has been running four major hospitals and two blood transfusion centers in Punjab.

Apart from that, in the Muzaffargarh district, located some 380 kilometers from Punjab's provincial capital Lahore, the trust is running a hospital given as a gift by Turkey to Pakistan in 2014.