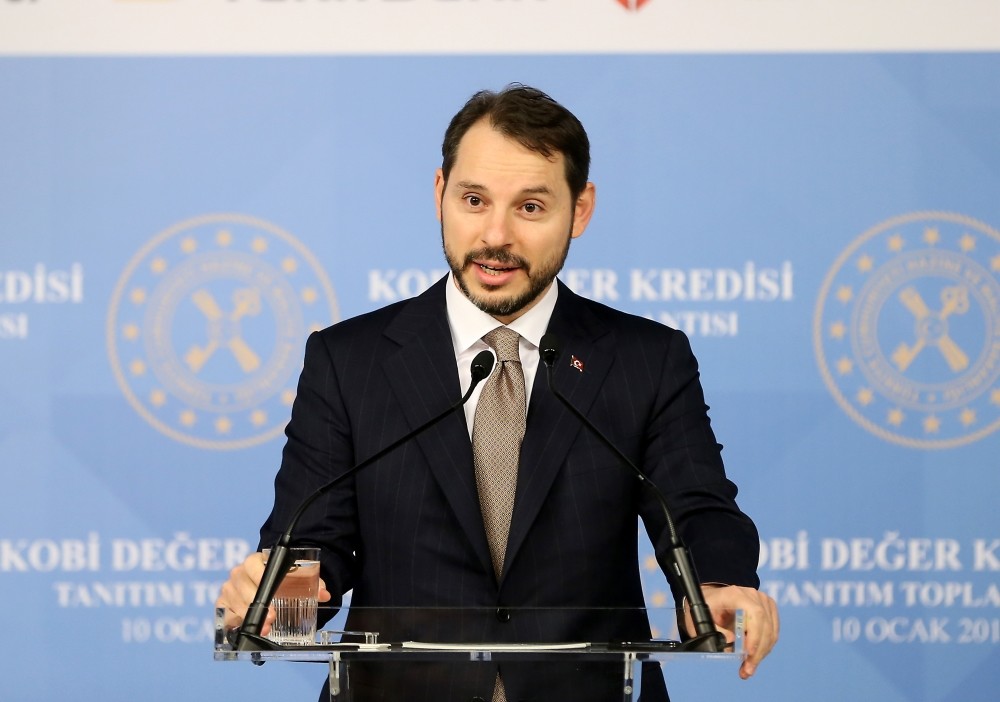 Treasury and Finance Minister Berat Albayrak speaks at the announcing ceremony of a new financing package for small and medium-sized enterprises (SMEs) yesterday in Istanbul.
by Daily Sabah with AA Jan 11, 2019 12:00 am

In a bid to revive the real economy through boosting economic activity in small and medium-sized enterprises, the Turkish government and leading banks launched a finance plan worth TL 20 billion

The Turkish government and 13 banks have joined forces to provide a TL 20 billion ($3.7 billion) finance package for small and medium-sized enterprises (SMEs) that have annual turnovers of less than TL 25 million, Treasury and Finance Minister Berat Albayrak announced Thursday. Between 20,000 and 40,000 SMEs will benefit from this package, and they may benefit from the six-month, nonrefundable loan package with a 1.54-percent monthly interest rate, the minister explained during a press meeting in Istanbul. "Firms in the manufacturing and export sectors will receive TL 1 million, and enterprises operating in other sectors will receive TL 500,000," the minister added.

The SME credit package was created by lenders, and it will not affect the country's treasury, Albayrak underlined. The lenders are state-run Halkbank, Vakıf, Vakıf Katılım, Ziraat and Ziraat Katılım in addition to private banks Alternatif, Albaraka, Denizbank, Garanti, Şeker, TEB, QNB Finans and Yapı Kredi.

According to a report by the Organization for Economic Co-operation and Development (OECD), small and medium-sized businesses play an important role in improving efficiency and diminishing inequalities, constituting more than 95 percent of all companies and providing 60-70 percent of employment in OECD member countries.

Touching on the country's 2018 targets, he highlighted that Turkey reached all targets with recovery in inflation, foreign currency, interest and CDS premiums. "The period in the last three to four months and its outputs show the rebalancing process is continuing step-by-step," he added.

Albayrak also stressed the robust financial structure of Turkish banks and noted the recent steps taken by state and private lenders to strengthen their capital base. The minister reiterated the government's agility in taking measures when necessary, and the ministry will take any precaution for the state banks in a more cautionary manner. Speaking of the 2019 targets, Albayrak underscored that the fight against inflation and the drive for budget discipline will continue this year with stronger policies.

Commenting on the loan package prepared for the manufacturing industry, the SMEs and exporters, Erdal Bahçıvan, chairman of Istanbul Chamber of Industry (İSO), emphasized that it will be a lifeline for the Turkish economy and that it comes at a time when financial resources are extremely limited. "We hope it will create a valuable contribution to our production, employment and our exports. In order to raise moral values in the economy, it will create a positive start in the new year," Bahçıvan said, adding that they find the package very important and meaningful in terms of financing, which is the main problem of SMEs.

Confederation of Turkish Tradesman and Craftsman (TESK) Chairman Bendevi Palandöken, on the other hand, remarked that the package will benefit the whole tradesmen community, stating that the package, which will be provided to around 40,000 businesses, will relieve the markets. "We see this support package as an important step for our economy and for all markets," he noted.

Also evaluating the package, Rifat Hisarcıklıoğlu, head of the Union of Chambers and Commodity Exchanges of Turkey, said it was good news for the SMEs that encounter funding shortages and will boost the morale of the real sector. With this package, the opportunity of SMEs to access loans will increase, economic activity will be revived, and employment, production and exports will be positively affected, Hisarcıklıoğlu said in a written statement.

Albayrak announced that the Treasury sold bonds worth $2 billion on Wednesday. The bonds, which will mature in 2029, attracted a demand over $5 billion from international investors. "The strong demand proves the response to the strong and stable economic policies of Turkey," the minister said.

The government plans to sell $8 billion in international markets this year. "This strong performance revealed the investors' confidence in the government's policies and the solid fundamentals of the Turkish economy," Albayrak explained. "The offering attracted an order book of more than twice the actual issue size from more than 200 accounts," the ministry said in a statement.

Three international lenders – Citigroup, Deutsche Bank and JP Morgan – were authorized to issue the U.S. dollar-denominated Turkish bond on Wednesday due in April 2029, as part of the 2019 external borrowing program.

The transaction was finalized with a nominal amount of $2 billion, according to the statement. The bond has a coupon rate of 7.63 percent, and its yield rate for investors is 7.68 percent.

The largest national share of the bonds was sold to investors from the U.S., totaling 40 percent, followed by Turkey with 27 percent, Britain with 20 percent, various other European countries with 8 percent and other regions with 5 percent.

"With this transaction, the amount of funds raised from international capital markets as part of $8 billion worth of the 2018 eurobond issuance program has reached $2 billion," the ministry noted.