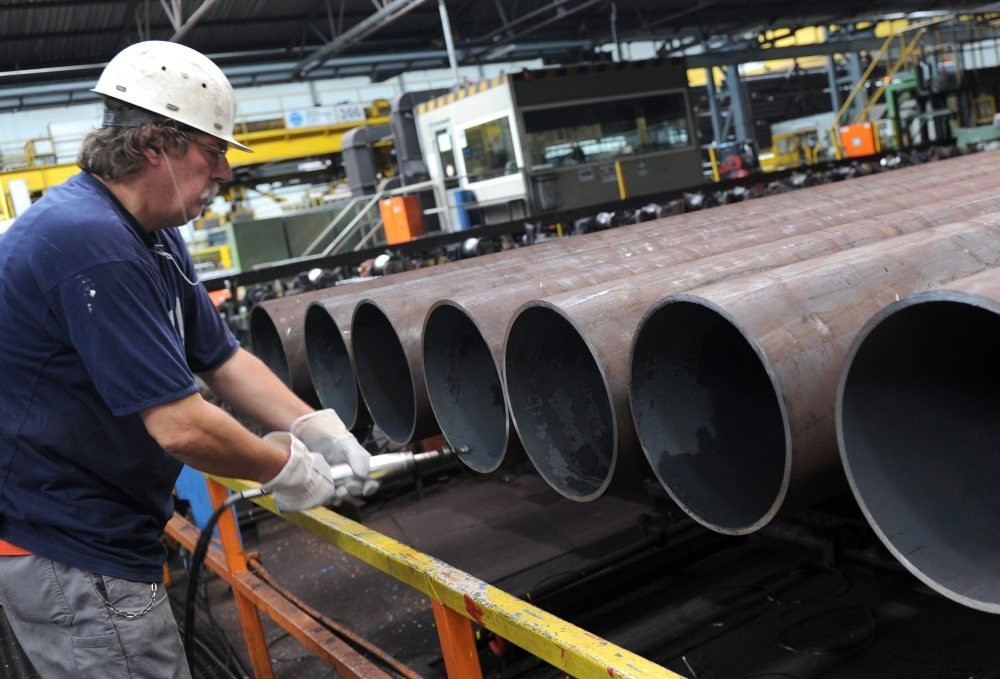 The German economy grew by 1.5 percent in 2018, the weakest rate in five years and markedly slower than the previous year, preliminary data showed yesterday, in a sign that exporters in Europe's largest economy are being hit by trade tensions.

German companies are struggling with a cooling of the global economy and tariff disputes triggered by U.S. President Donald Trump's 'America First' policies. The risk that Britain will leave the European Union without a deal in March is another uncertainty. The preliminary GDP estimate published by the Federal Statistics Office was in line with market expectations and compared with a growth rate of 2.2 percent in 2017.

"The German economy thus grew the ninth year in a row, although growth has lost momentum," the statistics office said, adding that growth was mainly driven by domestic demand with household consumption and state spending up on the year.

Company investments in machinery and equipment were particularly strong, rising by 4.5 percent on the year.

This helped to offset a slowdown in export growth which nearly halved to 2.4 percent, from 4.6 percent in 2017.

As imports grew at a faster pace than exports, net trade had a slightly negative effect on overall growth, the office said.

The head of the DIW economic institute, Marcel Fratzscher, pointed to strong domestic activity and the record state budget surplus of nearly 60 billion euros ($68.61 billion), which are both seen driving growth this year as well.

"The strong labor market with rising employment and healthy wage hikes will help to maintain private consumption as the main pillar of economic growth," Fratzscher said.

"The trade disputes and the uncertainty surrounding a recession in the U.S. in the coming two years are probably the biggest risks for the economy."

German exports to China grew nearly 10 percent year-on-year from January to November, while exports to Britain fell by 3.6 percent in the same period, the office said. "The overall impact of Brexit on German economic growth is impossible to quantify," an official of the statistics office told a news conference in Berlin.

British lawmakers set to reject the withdrawal agreement negotiated with the EU by Prime Minister Theresa May in a vote scheduled yesterday evening, leaving unclear what form Brexit on March 29 will take or even if it will happen at all.

The Statistics Office said the economy probably grew slightly in the fourth quarter of 2018, which would mean it escaped recession -- defined as two or more consecutive quarters of negative growth.

There was also a slightly positive statistical overhang at the end of 2018, suggesting the economy is carrying modest growth momentum into 2019, the office said.

Policymakers and economists are racking their brains over how much the slowdown is caused by one-off factors or if there are more fundamental, structural problems at play. The statistics office pointed to domestic bottlenecks in new car registrations due to the introduction of stricter pollution standards, and a summer drought that caused disruptions to deliveries by river ferry of fuel and other raw materials.

But the economy's weak performance in the fourth quarter suggests that the contraction from July to September was more than just a blip and that Germany has reached peak growth.

A string of unexpectedly weak data also from other European countries has pointed to a cooling in the eurozone economy as a whole, possibly making it more difficult for the European Central Bank to raise interest rates anytime soon.

Meanwhile, the euro fell yesterday after data showed Germany's economy slowed in 2018, underscoring fears about a broader slump in Europe.

An unexpected fall in German industrial output last week weakened the euro and bred concern about a slowdown and the ECB's caution as it tries to wean the region off stimulus.