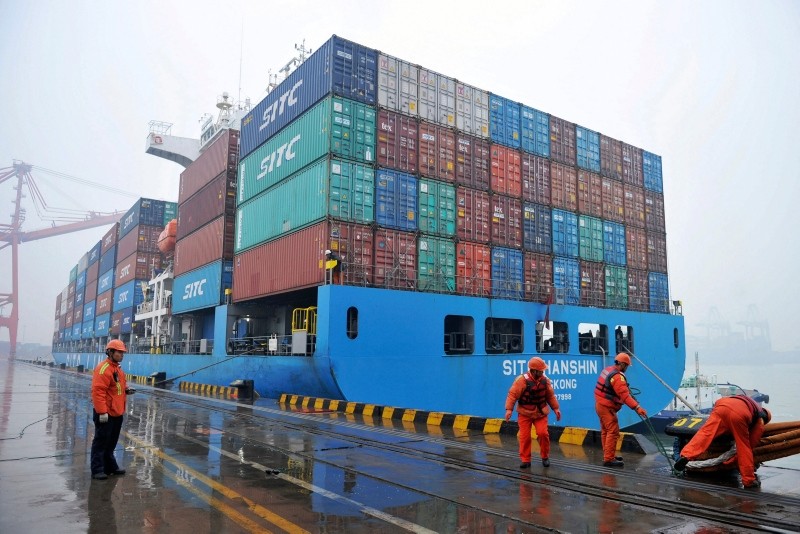 Stocks jumped to session highs late Thursday after a Dow Jones report that the United States is considering to lift tariffs on China.

The trade spat between the U.S. and China remained a chief area of concern for investors. Late Wednesday, the Wall Street Journal reported that U.S. prosecutors are investigating Chinese technology giant Huawei over possible theft of trade secrets from T-Mobile and other U.S. companies. Intellectual property rights and theft of trade secrets is a central issue in the trade dispute, and criminal charges could ratchet trade tensions even higher. But on Thursday, China's government said the top trade envoys from both countries will meet in Washington later this month, a possible sign of progress toward ending their dispute.

Smaller companies are making bigger gains than the rest of the market after they suffered outsize losses in late 2018.

In the second half of last year the Russell 2000 took even deeper losses than other stock indexes as investors worried that the U.S. economy might slow significantly in 2019. That would lead to weaker profit growth for companies in general and domestically-focused ones in particular. With investors growing a bit more optimistic in 2019, the Russell 2000 has jumped 8 percent this month, almost double the gain for the S&P 500. The Russell is still 15 percent beneath the record high it set in late August.

LEADERS: A strategy review by the Pentagon concluded that the U.S. needs to expand defense technology into space so it can more quickly detect, track and defeat incoming missiles. That could contribute to another boost in defense spending.

Elsewhere Fastenal, which makes industrial and construction fasteners, jumped 4.9 percent to $56.79 after it said customers became a bit less cautious about spending in December.

Among health care companies, drugmaker AbbVie added 1.9 percent to $87.17 and medical device maker Becton Dickinson picked up 1.9 percent to $235.55 after it said it had a strong fiscal first quarter.

THE QUOTE: After three months of big swings that were linked to trade talk developments, investors have adjusted to the uncertainty, said Gina Martin Adams, the chief equity strategist for Bloomberg Intelligence. She said investors want hard data and clear answers about what international trade will look like.

"These issues between Huawei and trade have been a constant source of volatility and uncertainty that is weighing on sentiment," she said. "Any permanence on the issue is going to be deemed an improvement."

BANKS CLANK: Morgan Stanley skidded 3.7 percent to $42.83 after its earnings and revenue disappointed analysts. Like a number of other big financial companies, Morgan Stanley was hurt by difficulties in trading during the volatile fourth quarter. While Morgan Stanley's traders are considered some of the best in the business, their stock trading revenue was flat over the last three months of the year and bond trading revenue tumbled 30 percent. The S&P 500 lost 14 percent during the last quarter of the year.

Other banks also traded lower. KeyCorp lost 2.3 percent to $16.37 after posting a smaller-than-expected profit. M&T Bank stood out and its shares rose 4.6 percent to $161.55.

TARNISHED: Signet Jewelers plunged 24.4 percent to $25.21 after it said its holiday season had been difficult and slashed its annual forecasts. The company said competition grew tougher in December and sales of some key products were weak. The company also said fewer customers came to its stores last month.

A series of big luxury retailers including department stores like Macy's have said they struggled over the holidays even though consumer confidence is high and pay for workers is rising. The stock market's steep losses in December appear to have made some consumers reluctant to splurge.

BONDS: Bond prices were little changed. The yield on the 10-year Treasury note remained at 2.73 percent.

ENERGY: Benchmark U.S. crude oil fell 0.4 percent to $52.08 a barrel in New York, while Brent crude, the international standard, held steady at $61.31 a barrel in London.