Joint efforts of government, business to make Turkey one of the world's top 10 economies 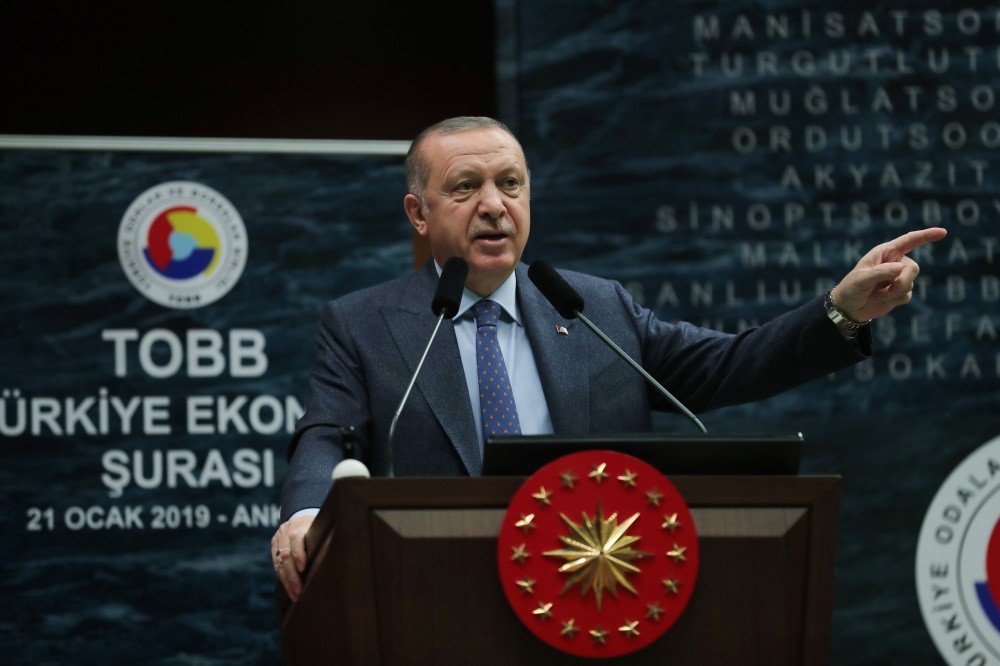 In accordance with its 2023 vision, Turkey's government and business world members are determined to cooperate to accomplish an ambitious goal-to become one of the top 10 economies in the world

The Turkish government and the private sector members have joined forces to accomplish Turkey's 2023 vision, including a number of goals to make the country one of the top 10 economies in the world. During his address at the Union of Chambers and Commodity Exchanges of Turkey (TOBB) Economy Council Meeting in Ankara yesterday, President Recep Tayyip Erdoğan called upon the businesspeople to render Turkey one of the high-income level countries by 2023. "We will make Turkey one of the top 10 economies in the world by 2023 through collaboration," Erdoğan said. The country is currently classified as an upper-middle income country by the World Bank.

In terms of purchasing power parity (PPP), Turkey ranks 13th in the global rankings, and it has the 17th largest nominal gross domestic product (GDP) in the world. Its GDP was recorded at $851 billion in 2017.

In a previous address, Erdoğan stressed that Turkey will become the 12th largest economy in the world in terms of PPP in 2019.

The slowing but positive growth in the third quarter, despite a turbulent period in the said period, both locally and globally, pointed to the launch of a balancing period while featuring the impact of measures taken during the tumultuous summer.

According to U.K.-based multinational bank Standard Chartered Plc's long-term forecasts, Turkey will surpass Germany, Russia and Japan to become the fifth-largest economy in the world by 2030, while China will unsurprisingly emerge as the world's number one economic power by 2020.

The projection foresees a major shake-up of the world's current economic order, envisioning seven emerging markets (EM) taking over the top 10. The U.K., France and Italy are nowhere to be seen in the select 10.

Using purchasing power parity exchange rates and nominal GDP, Standard Chartered economists have predicted that India will comfortably pass the U.S. to grab second place, while Indonesia will break into the top five, just above Turkey by 2030. The report stressed that population aging will have a significant impact on potential growth in both emerging and developed economies for the next several decades, and Turkey has a population of more than 80 million.

Turkey, US commitTed to raising

Turkey and the U.S. once again expressed mutual commitment to increase bilateral trade to $75 billion, which during the January-November period was $19 billion according to the statistics of the Trade Ministry. The figure corresponded to a 1.4 percent rise in bilateral trade.

During a phone call between President Erdoğan and U.S. President Donald Trump on Sunday night, the two presidents agreed on the fact that the current bilateral trade volume of nearly $20 billion is not sufficient enough to benefit both sides.

"In our last night call, President Trump and I discussed boosting the trade between Turkey and the U.S. to $75 billion," Erdoğan said during his address. He also added that Trump praised Turkey's shipbuilding industry and recommended a joint working group on the steel industry.

Bilateral relations between the two NATO allies have been subjected to volatility in the last few years. The tensions have sometimes been affected by the protectionist inflections of the Trump administration.

On Aug. 10, 2018, President Trump raised import tariffs on Turkish steel and aluminum over the case of American pastor Andrew Brunson who had been tried in Turkey due to his links with terror groups.

Despite the on and off tensions, the U.S. is still the second highest foreign direct investor in Turkey with $11.6 billion from 2002 to October 2018, the statistics of the Industry and Technology Ministry revealed. The ministry's data also noted that 1,853 U.S. companies operate in the Turkish energy, infrastructure, food, textile and other sectors.

Meanwhile, Turkey's exports to the U.S. dropped by 4.3 percent and fell to $7.6 billion during the January to November 2018 period compared to the same period in 2017, while imports from the world's largest economy rose by 5.7 percent and hit $11.4 billion in the same period. The bilateral trade volume between the two countries was recorded at $20.6 billion in 2017.

Jennifer Miel, the Executive Director of the United States Chamber of Commerce's U.S.-Turkey Business Council, said on Saturday the trade between Turkey and the U.S. continued to be a stabilizing force in bilateral relations.

Miel noted that Turkish and U.S. companies continue to be interested in investment projects that will strengthen digital transformation technologies to increase global access and competitiveness.

"Despite diplomatic difficulties and increasing customs duties, the trade volume between Turkey and the U.S. in 2018 is expected to have reached a high level of $20 billion," he said.

Referring to the recent phone call between the leaders of the two countries, Miel noted that the call focused on how the economic relations between the U.S. and Turkey are intersected with defense and energy needs. Miel stressed the cooperation between Turkey and the U.S. in the defense field has constituted a prominent dimension of bilateral trade relations for a long time, adding the co-production and technology transfer have strengthened the U.S. supply chain and advanced technology research and development (R&D), while transforming Turkey's defense and civil aviation industries. Pointing out that Turkey is a supplier of the $1.5 trillion F-35 program, Miel said the country's plan to purchase Russia's S-400 missile system makes its continued participation in the F-35 program harder.

"Fortunately, both leaders focus on how best to resolve these differences," he continued. "Turkey is an energy transition center extending from the Middle East and the Caucasus to Europe. Turkey's liquefied natural gas (LNG) terminals allow the U.S. to import shale gas, which will help diversify Turkey's gas supply."

The U.S. Chamber of Commerce's U.S.-Turkey Business Council will visit Ankara with a high-level business delegation in February in order to come together with Turkish officials and improve bilateral collaborations in agriculture, digital economy, finance, health and women's participation in the workforce.