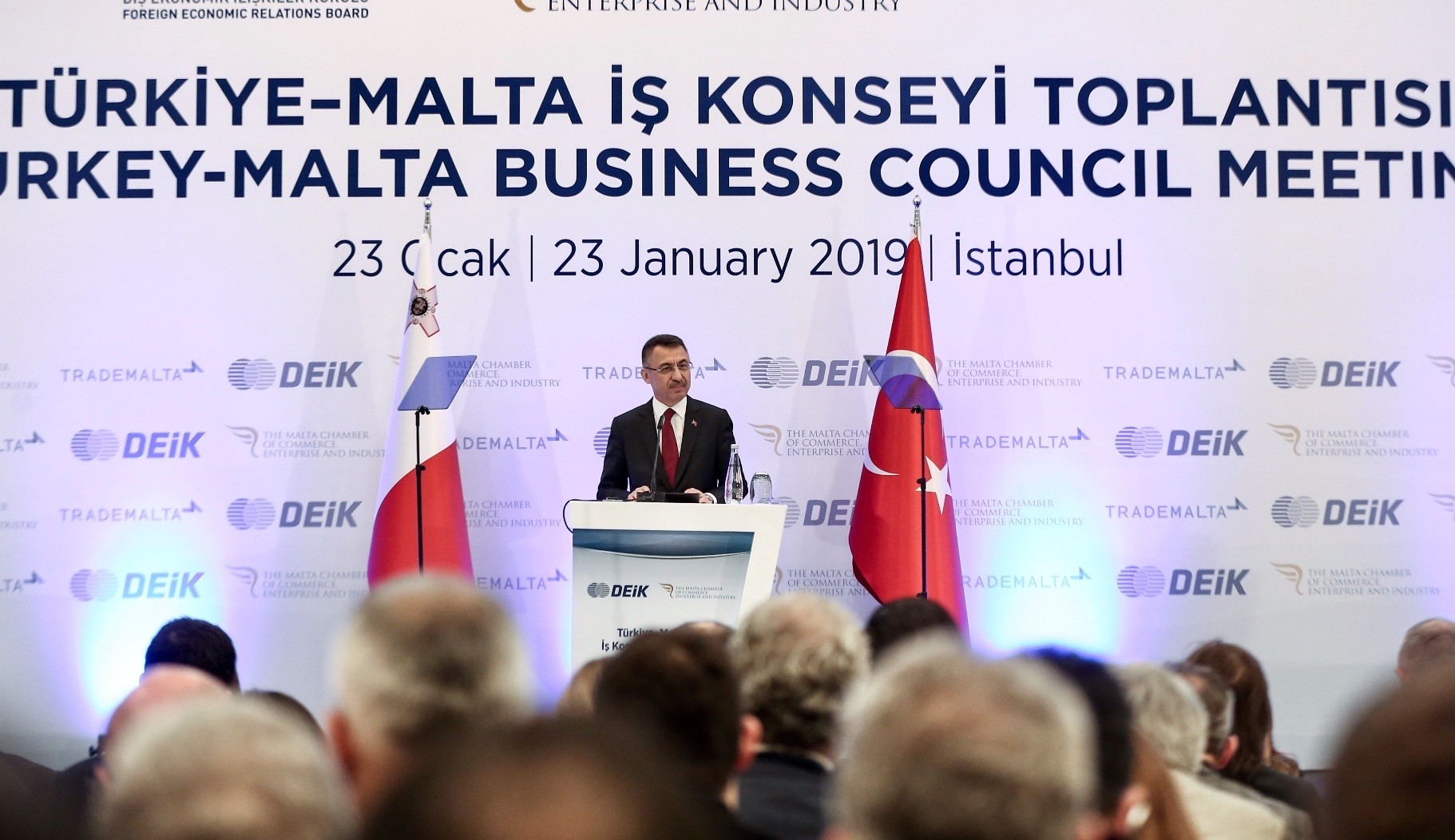 The modernization of the current customs union agreement with the EU is of crucial importance not only for Turkey but for Malta as well, and would provide Maltese firms with wider access to the Turkish market, Vice President Fuat Oktay said

As much as the update of the customs union with the European Union (EU) is important for Turkey, it is of the same importance for Malta, according to Vice President Fuat Oktay. In his address at the Turkey-Malta Business Council organized by the Foreign Economic Relations Board (DEİK) in Istanbul Wednesday, Oktay said that EU countries are key economic partners for both countries, indicating that with the update of the customs union with the EU, Maltese companies would be able to access more products from the Turkish market at more affordable prices.

The modernization of the customs union agreement between Turkey and the European Union has been on the agenda of bilateral meetings for more than two years now. Although both sides have expressed the will to take steps to update the agreement, as it will be advantageous for both sides, no concrete development has so far been observed; yet, efforts to maintain diplomatic dialogue continue with particular insistence on the benefits it will yield for both sides.

Explaining that the important expectation for Turkish and Maltese business people was "to act in accordance with the goal of increasing the bilateral trade volume to $1 billion," Vice President Oktay said: "We are two countries that exceed $1.2 billion in trade volume. It is not acceptable to go down to half a billion dollars from $1.2 billion. Our economic models will develop not only with public, government investments, but also with the entrance of business worlds and the private sector into this business. As governments, we are responsible for paving the way for you. Our bilateral trade volume had actually exceeded this level in recent years."

'Maltese investors to benefit from opportunities in Turkey'

With a $2 billion capital position, Malta has a 5.39 percent share of investments made abroad from Turkey, the vice president noted.

"Approximately 90 percent of these investments are in banking and finance, and the rest are in transportation and storage. We are aware that we need to diversify products that are subject to export and import, Oktay said, referring to the importance of the update of the customs union with the EU. "It is important for us that the Maltese business community voices strong support for the Maltese government giving the issue of the update of the customs union as well as visa liberalization that would increase the inter-communal contacts," he added.

Turkey is the only non-EU country that has had a customs union agreement, which was inked in 1966, with the bloc. Turkey has been one of the largest trade partners of the union with an export value of $84 billion and an import value of $80 billion in 2018 in goods alone. In its Dec. 21, 2016, assessment, the EU Commission proposed modernizing the current deal, which only covers a limited range of industrial products and excludes agriculture, public procurement and services.

He said the Turkish contracting sector ranks second in the world after the People's Republic of China, indicating that there are seven Turkish construction companies among the world's top 100 firms in this field.

"As a matter of fact, we know that some of our companies have already undertaken important projects in Malta, while some are closely monitoring the tender processes for major infrastructure projects, including the Malta-Gozo Island Tunnel Project. We want to see our business people work more closely to increase the number of such examples," he said. Pointing out that in addition to the construction sector, Turkey has made great progress in health care as in many other sectors in the last 20 years, Oktay said health tourism takes the lead in opportunities offered by the health care sector. "I know that Maltese business people have an interest in these areas, and I want to stress that we are ready to work together and pave the way for our private sectors," he continued, pointing to tourism as another area that holds an important place in the economies of the two countries.

"We are now in the 50-million threshold, hosting over 40 million tourists. Turkish tourism should not be regarded only as an economic sector, but an area that enables us to strengthen human ties," he said.

Turkey makes very serious breakthroughs with the combination of public opportunities and the experience and dynamism of the private sector in the defense industry, Oktay said, highlighting in this context, especially that the defense and security sector can stand out as strategic areas where they can develop cooperation between Turkey and Malta.

The vice president said that Turkey is one of the leading investors in Malta and that Turkish companies have made significant investments in Malta's logistics, infrastructure, finance and tourism sectors in recent years. Turkish Airlines (THY), which started its Malta-Istanbul flights in 2013, increased the number of weekly flights to 14 in a short time, Oktay indicated, suggesting that THY flights not only bring the citizens and business circles of the two countries closer, but also serve as a gateway to the world for Malta. "This opportunity offered by THY enables us to do business together in a wide geography," he added.

He said Turkey's total foreign direct investment in Malta has so far exceeded $1.3 billion, while Malta has recently reached a better level, particularly in finance and maritime, compared to other EU member states.

Since Malta's recent leaps in the service sector and its pioneering initiatives in areas such as blockchain are quite appreciated, Oktay said: "The fact that our Trade Ministry is the first public sector player to enter a platform developed by the private sector in blockchain this month indicates the willingness of our state to play an active role in developments in these important issues. In such areas, we find it useful for our business circles to work together in these fields."

As for her part, Malta's President Preca said: "Our government will continue to support Turkey and the EU accession negotiations. As Malta, we support the EU's enlargement policies. These efforts are very valuable for a sustainable, peaceful and prosperous Europe."

Preca stressed that the two countries have a very good cooperation environment. "We can carry this together to the next level. Malta's strategic potential is very high, as we are at the heart of Europe in terms of location. Turkey also has similar potential. Turkey is a very important country for Eurasia and the Mediterranean regions," she noted.

The Maltese president remarked that they came to Turkey with a private sector delegation involving powerful representatives operating in different areas and that she believes important opportunities will be realized thanks to the meeting.

Later in her speech, Preca underlined the importance of the tourism sector. "Especially education tourism is a field we attach a great deal of importance to in Malta. We would like more Turkish students to come to Malta to learn English. We have many educational institutions," she noted. Preca called on the private sector to "Come, and take advantage of the opportunities in Malta." She said Malta provides a proper private sector environment, and it has a competent workforce and a favorable tax regime.