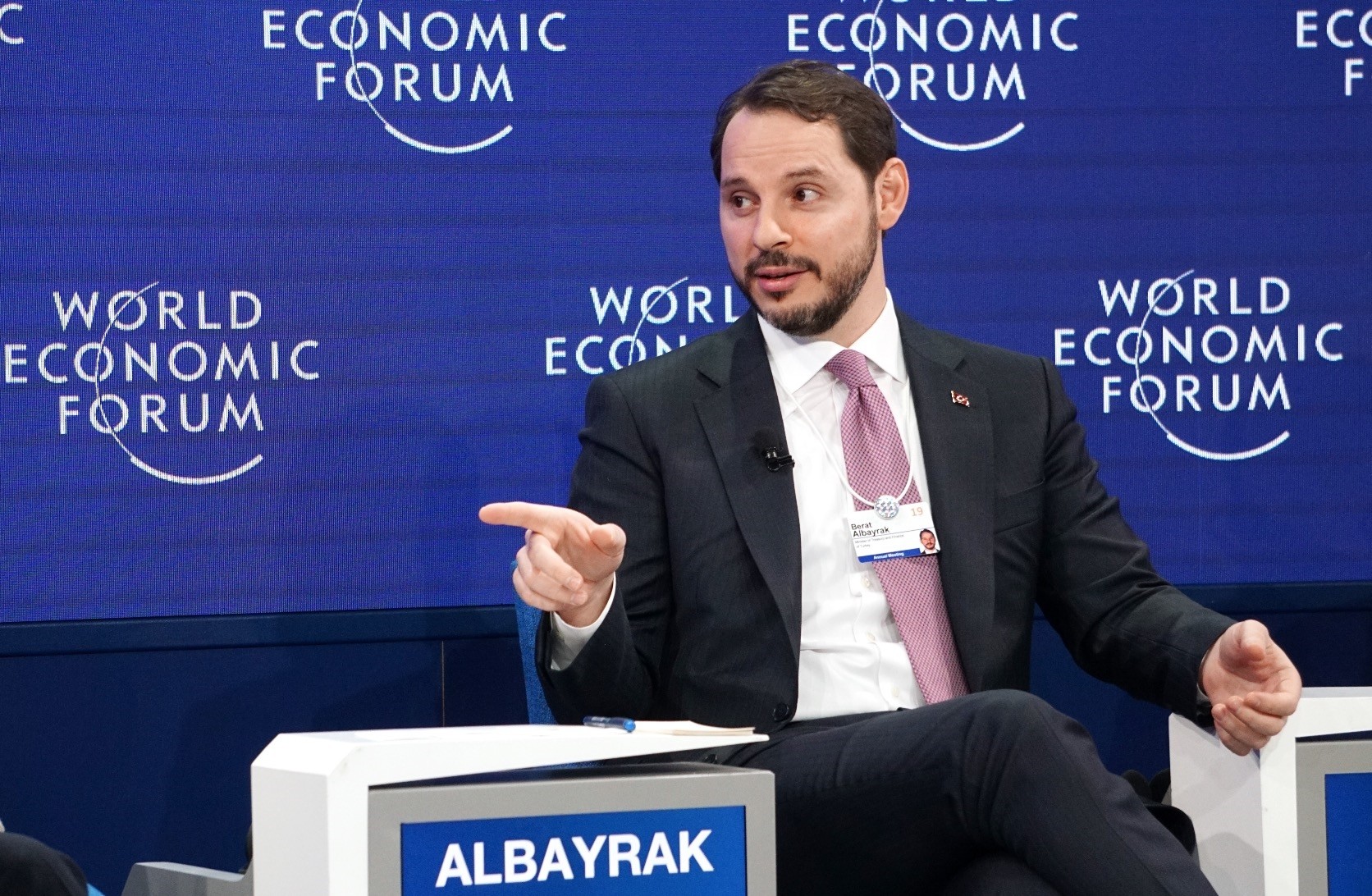 The second half of 2018 witnessed a very dynamic period for the Turkish economy with turbulence and recovery. The effective measures implemented by the economy administration successfully stymied the negative impacts and ensured stability in the markets, exchange rates and Turkey's macroeconomic outlook. Elaborating on the Turkish economy's performance, Treasury and Finance Minister Berat Albayrak said Turkey is on a positive track and the country's economy enjoys a robust equilibrium during his speech at the 49th World Economic Forum (WEF) in Davos, Switzerland.

In his address at the "Emerging Markets Outlook" session Wednesday, Treasury and Finance Minister Albayrak stressed that the Turkish economy has a strong foundation and the New Economic Program (NEP) that was disclosed in September has mitigated concerns over the country's economy. The minister suggested that the July 15, 2016 failed coup must also be taken into consideration while talking about the Turkish economy.

"The Turkish economy has a powerful balance and enjoys a much better performance than the summer period. With effective measures, Turkey has propped up its immunity against turbulence and volatility," he said.

The swift reaction to the turbulence in the summer was facilitated by the presidential governance system, which ensures full coordination among executive administrations responsible for the economy and started to officially operate on July 9 when President Erdoğan took oath and declared his cabinet on July 10, following the June 24 elections last year.

The minister also assessed the successful debt management of Turkey and said that the ratio of public debt to gross domestic product (GDP) in Turkey is 28 percent.

When asked about investment opportunities, the minister underscored that the Turkish economy maintained a growth trend in 2018 despite regional problems.

The country's economy grew 7.2 percent in the first quarter and 5.3 percent in the second quarter. The third quarter saw a 1.6 percent expansion in the GDP.

The Turkish government aims to reach an economic growth rate of 3.5 percent in 2020 and 5 percent by 2021 under the NEP.

"The Turkish economy offers unprecedented advantages. The country has a young and educated labor force," Minister Albayrak said and elaborated on the incentives provided for education in Turkey.

Previously, he said, the largest budget used to be allocated for the Defense Ministry but the latest government budget provided the National Education Ministry with the lion's share.

Another advantage in Turkey is the highly competitive private sector, Albayrak pointed out. Turkish exporters sell more than 20,000 different products to the countries across the world. Over the last 16 years, the country's exports soared to $170 billion from $35 billion years ago. Particularly in the transportation, telecommunications and energy sectors, Turkey has drawn large-scale investments during that period, Albayrak emphasized.

"We have strengthened our balance sheet in the most troubled times and ensured budget discipline. We have also succeeded in the fight against the current account deficit," he said and noted that January exports are on a rising trend, citing Trade Minister Ruhsar Pekcan.

In his evaluation, the treasury and finance minister also recalled that optimism and global cooperation played a role in overcoming the 2008 financial meltdown. Today, he said, no one is able to predict what may happen in the 2020s.

Commenting on Turkish-American relations, Albayrak stressed that the bilateral relations between the two North Atlantic Treaty Organization (NATO) allies are gaining more depth both in the regional and on the global platform.

In the last two phone calls to discuss regional issues, President Erdoğan and his U.S. counterpart Donald Trump agreed on raising the bilateral trade volume to $75 billion, from its current level of $21 billion.

Speaking to Reuters in Davos, Albayrak said that contrary to negative statements, the cooperation between Turkey and the U.S. is strong, as demonstrated by the dialogue and cooperation between President Recep Tayyip Erdoğan and his U.S. counterpart Donald Trump.

"All channels of communication are currently functioning," Albayrak said, adding that Turkey understands the concerns of the U.S. and vice versa.

Zarrab, who was arrested in the U.S. in March 2016 on charges of violating U.S. sanctions on Iran, plead guilty in the case in October 2017; he cooperated with prosecutors and testified against Atilla. Atilla's lawyers sought to dismiss all of the charges in December 2017 by citing insufficient evidence. They said prosecutors were unable to prove Atilla had any connection to Zarrab's crimes.

But on Jan. 3, 2018, Atilla was found guilty by a jury on five counts related to conspiracy and bank fraud, but acquitted on one count of money laundering. Following Albayrak's remarks at Davos, Halkbank shares trading on the Borsa Istanbul surged 0.75 percent and hit above TL 8.

Following Albayrak's comments, the Turkish lira firmed up 0.89 percent and was trading at 5.28 against the U.S. dollar. The Borsa Istanbul's benchmark index (BIST100) also hit over 100,141 points.