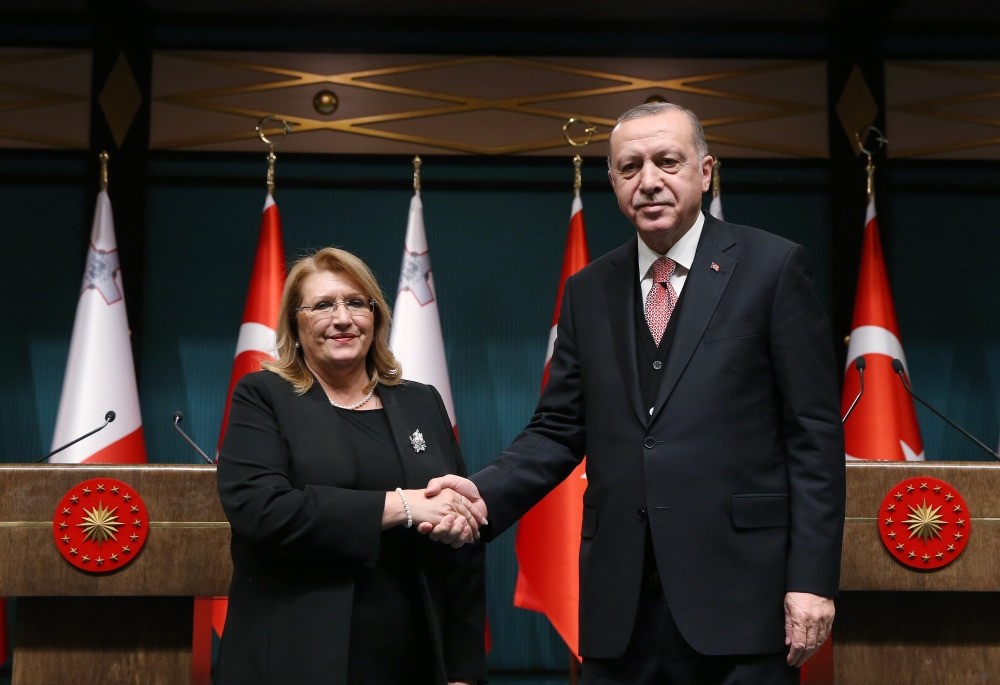 Turkey's growing political, diplomatic and economic relations with European countries over the last year was celebrated in a meeting between the Turkish and Maltese presidents in Ankara Thursday.

In a joint press conference with the Maltese President Marie-Louise Coleiro Preca, Erdoğan said that visa liberalization and updating the existing customs union would increase bilateral trade and investments.

The modernization of the customs union between Turkey and the EU has been on both parties' agenda for more than two years now. Although they have expressed the will to take steps to update the agreement, as it will be advantageous for both sides, no concrete development has so far been taken. Yet, efforts to maintain dialogue continue, with a particular insistence on the benefits it will yield for both sides.

Turkey is the only non-EU country that has had a customs union agreement with the bloc – inked back in 1966. Turkey has been one of the largest trade partners of the EU with exports worth $84 billion and imports up to $80 billion in 2018 alone.

In its Dec. 21, 2016, assessment, the EU Commission proposed modernizing the current deal, which only covers a limited range of industrial products and excludes agriculture, public procurement and services.

President Erdoğan said that he discussed all aspects of bilateral relations with his Maltese counterpart. He particularly pointed to the opportunity to cooperate in the energy sector, as well as in tourism, education, culture, finance and infrastructure.

During a business council meeting Wednesday and the delegation's meetings yesterday, the two countries agreed on cooperating in the pharmaceutical industry, Erdoğan said and noted that there is great potential to work together in the renewable energy sector.

"Turkish and Maltese businesspeople would benefit to a great extent from joint investment projects in third countries," he said.

In 2017, Turkey's exports to Malta totaled around $540 million and its imports were recorded at $52 million. During the January-November period, Turkish exports to Malta stood at $434.4 million while imports came at $32 million.

Meanwhile, Turkey's flag carrier Turkish Airlines (THY) operates regular flights to Malta twice a day and Erdoğan highlighted that there was a demand to increase that frequency. Citing Malta's strong support for Turkey's accession to the EU, Erdoğan expressed his belief for the continuity of the endorsement by the Mediterranean country.

The Turkish president also elaborated on the common problems Turkey and Malta face because of regional developments, notably the refugee influx.

"We are in sync to take joint action against the negative impacts of the political and humanitarian crisis unfolding in our region," he said and added, "We have observed that Turkey and Malta share common approaches to threats faced by our countries and the region."

President Erdoğan reiterated the lack of support from the EU with regards to the migrants settling in Turkey. He recalled that the EU had previously pledged 6 billion euros, "3+3 in two installments," and the union has so far only paid 1.75 billion euros to Turkey. Despite EU's failed promises, Turkey has so far spent $35 billion for the humanitarian needs of refugees. Malta's President Preca said her country supports Turkey's EU accession negotiations. She emphasized that Malta backs EU enlargement policies, indicating that such efforts are necessary for sustainable peace and prosperity in Europe.

Perca further emphasized the will and the determination of her government to further improve ties with Turkey in every field and take them to the next level.

She said there are opportunities for the two countries to collaborate in many areas including the pharmaceutical sector, aviation, life sciences, energy, logistics as well as many other fields.

He said that Turkey's total foreign direct investment in Malta has so far exceeded $1.3 billion.