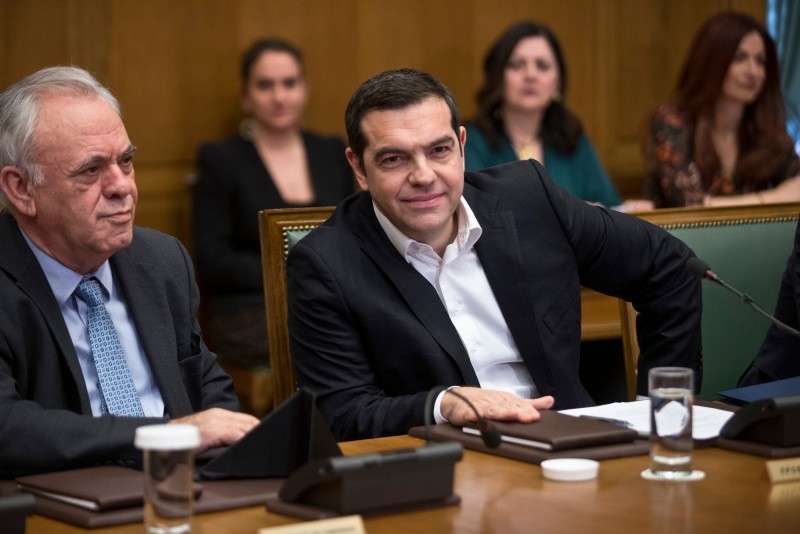 Greek Prime Minister Alexis Tsipras (R) and ministers of his government attend a cabinet meeting in the parliament in Athens, in Athens, on Monday, Jan. 28, 2019. (AP Photo)
by Compiled from Wire Services Jan 28, 2019 12:00 am

Greece announced on Monday plans to return to bond markets and to increase the minimum wage by more than expected, five months after exiting its bailout program and ahead of elections.

Authorities unveiled plans to issue a 5-year bond, a first market test since the end of Greece's international bailout in August.

In a televised address, Prime Minister Alexis Tsipras said the minimum wage would be increased by nearly 11 percent starting next month — from 586 euros ($668) per month to 650 euros ($750).

Tsipras, who signed up to Greece's third bailout in 2015, also proposed the abolition of the youth minimum wage, which is a lower amount for those below 25.

Ministers applauded and a smiling Tsipras responded: "From your reaction I reckon that my proposal is ... approved."

The plan must be approved by parliament in the coming days to take effect next month, as the government hopes.

Athens had told its European lenders that it would reinstate the process of increasing the minimum wage periodically after the end of the bailout.

"This is an essential but also a symbolic action — something owed to the people who bore the brunt of the (country's) bankruptcy and fiscal adjustment, whose lives, prospects and expectations were immersed into the darkness of the crisis," he said. "Now that the country is coming out of the crisis, we can gradually begin to heal the wounds."

The increase, while slightly larger than expected, does not restore the minimum wage to the 751-euro level it was in 2012, when huge cuts were imposed as part of Greece's bailout agreements. The increase, also affecting pay scales and state benefits, will take effect next month.

The suggested increase was agreed following consultations among the government, employers and labor unions.

Greece slashed the standard minimum monthly wage by 22 percent to 586 euros in 2012, when it was mired in recession.

Meanwhile, the bond auction is expected to take place this week and raise up to 3 billion euros ($3.4 billion).

Greece has held off returning to debt markets due to financial turbulence created by a budget crisis in Italy.

But borrowing rates eased in recent weeks and the government last week survived the threat of collapse over a vote in parliament to normalize relations with neighbor Macedonia. Representatives of Greece's international creditors also completed an inspection in Athens last week.

Greece's debt agency said the bond, carrying an April 2024 maturity, would be offered to investors "in the near future".

In its last bond issue in February 2018, Greece raised 3.0 billion euros at 3.5 percent via a 7-year bond. Offers at the time stood at around 6.5 billion euros.

Greece currently has no urgent need to draw money from the bond markets as it has built a cash cushion of at least 15 billion euros.

"Our financing needs are fully covered to 2020," Tsipras told parliament earlier this month.

The yield on Greece's 10-year-bond edged down on Monday to 4.06 percent while shares on the Athens Stock Exchange were unchanged.

Tsipras, whose left-wing SYRIZA party is trailing the conservative New Democracy party by up to 12 points in opinion polls, is facing local government and European Parliament elections in May and must call a general election before October.

The International Monetary Fund urged Athens last week to introduce greater flexibility into the labor market to mitigate any negative impact from its new policies.