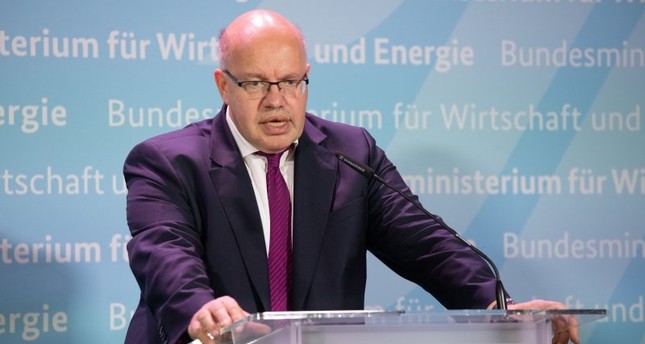 The German government has slashed its growth forecast sharply for this year, to 1.0 percent from 1.8 percent in last fall's outlook, as fears about a chaotic Brexit and trade tensions hold back Europe's largest economy.

Economy Minister Peter Altmaier said Wednesday the German economy would grow for a 10th year in a row. But he said "the headwinds, primarily from the external environment, are increasing."

German businesses are unsettled about the possibility that Britain will leave the EU without agreeing on trade rules for a transition period. New import taxes imposed by the U.S. and China are also weighing on prospects for global trade. That hurts the outlook for Germany because the country is a major exporter.

The growth in 2018 was the weakest rate in five years, in a sign that exporters in Europe's largest economy are being hit by trade tensions.

German companies are struggling with a cooling of the global economy and tariff disputes triggered by U.S. President Donald Trump's 'America First' policies. The risk that Britain will leave the European Union without a deal in March is another uncertainty.

The economy's weak performance in the fourth quarter suggests that the contraction from July to September was more than just a blip and that Germany has reached peak growth.

A string of unexpectedly weak data also from other European countries has pointed to a cooling in the eurozone economy as a whole, possibly making it more difficult for the European Central Bank to raise interest rates anytime soon.