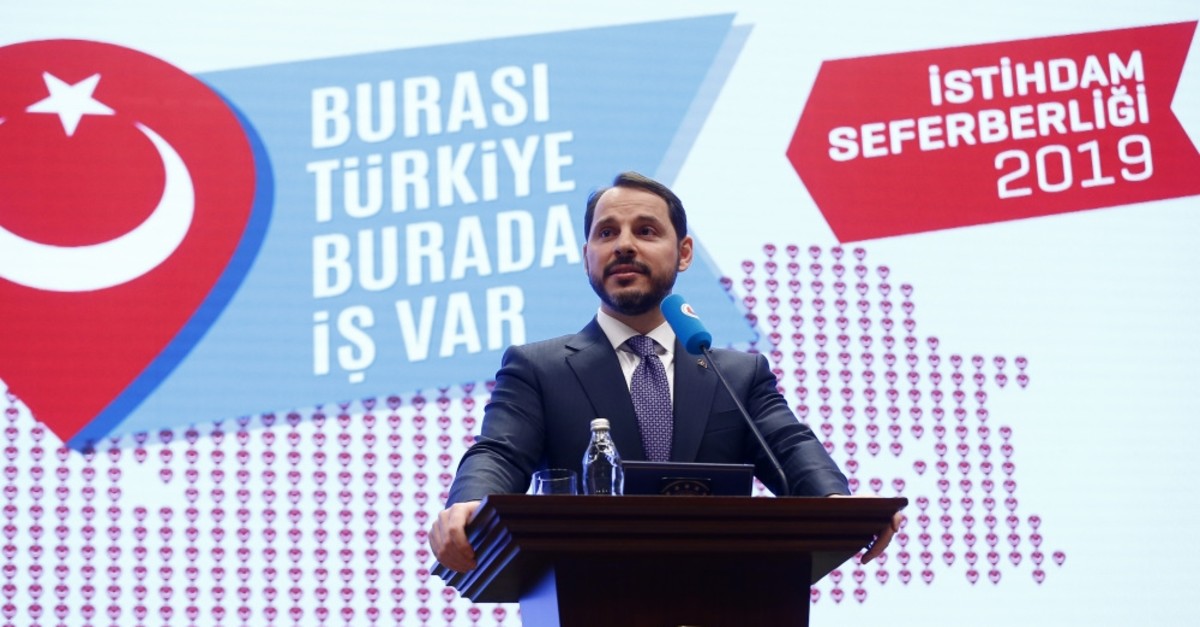 Treasury and Finance Minister Berat Albayrak speaks at the employment mobilization campaign meeting held at the premises of the Union of Chambers and Commodity Exchanges of Turkey in Ankara, Feb. 25, 2019.
by Daily Sabah Feb 26, 2019 12:07 am

In order to minimize the impact of the balancing period of the real sector, the economy administration has announced a new employment campaign to support insurance premiums and tax payments and provide jobs for 2.5 million people

With the aim of tackling unemployment in the rebalancing period, the Turkish economic administration launched another employment mobilization program, the first of which was announced in February 2017 and continued in 2018.

The first two rounds of the campaign, launched with the call of President Recep Tayyip Erdoğan to private sector representatives, proved effective and reduced Turkey's unemployment rate. When a nationwide employment mobilization campaign was launched in February 2017, 1.5 million jobs were created in a 10-month period with the hard work of Turkish business circles.

Although overall annual results have not been announced yet, the Turkish Employment Organization (İŞKUR) previously stated that more than 1.1 million people were employed during the period of January to November. The organization also noted that the real sector has asked for more than 2.2 million employees in the same period.

The third program for employment mobilization in Turkey was announced Monday at a meeting organized at the premises of the Union of Chambers and Commodity Exchanges of Turkey (TOBB) with the participation of Treasury and Finance Minister Berat Albayrak and Family, Labor and Social Services Minister Zehra Zümrüt Selçuk. In his address at the meeting, Minister Albayrak announced that the government program will create 2.5 million jobs this year.

In reference to the recent economic support packages, Minister Albayrak stressed that the economy administration has recently announced various initiatives and packages to minimize the impact of the balancing period on Turkish industrialists and tradesmen.

With a strong emphasis on prioritization of employment policies, the minister highlighted that the Justice and Development Party government has created 10 million jobs since 2009 and noted the new packages added to the employment incentive schemes announced in 2018.

The government will, for a period of three months, pay for the insurance premium, tax and wage support for wage earners employed from February 2019 to April 2019.

According to the country's statistical authority, Turkey's unemployment rate was 12.3 percent as of November 2018.

The number of unemployed persons - aged 15 years and over - totaled 3.98 million, as the number of employed people was 28.3 million. As noted in Turkey's new economic program, which was announced in September 2018, the country aims to reach an unemployment rate target of 10.8 percent in 2021 under the new economic program announced in September last year.

Recalling previous loan packages announced for small and medium-sized enterprises (SMEs), Albayrak said the loan scheme studiously prepared in collaboration with 13 banks have responded to the liquidity needs of the real sector to a great extent.

The Turkish government and 13 banks joined forces around mid-January to provide a TL 20 billion finance package for small and medium-sized enterprises that have annual turnovers of less than TL 25 million. Between 20,000 and 40,000 SMEs will benefit from this package, and they may benefit from the six-month, nonrefundable loan package with a 1.54-percent monthly interest rate, the minister explained during a press meeting in Istanbul. Firms in the manufacturing and export sectors will receive TL 1 million, and enterprises operating in other sectors will receive TL 500,000.

According to a report by the Organisation for Economic Co-operation and Development (OECD), SMEs play an important role in improving efficiency and diminishing inequalities, constituting more than 95 percent of all companies and providing 60-70 percent of employment in OECD member countries.

Speaking at the employment mobilization program, Family, Labor and Social Services Minister Zehra Zümrüt Selçuk said, "As a state, we pay salaries, taxes and premiums of every new personnel employed by businesses for three months." The minister added that the government will continue to pay taxes and premiums for personnel for the following nine months.