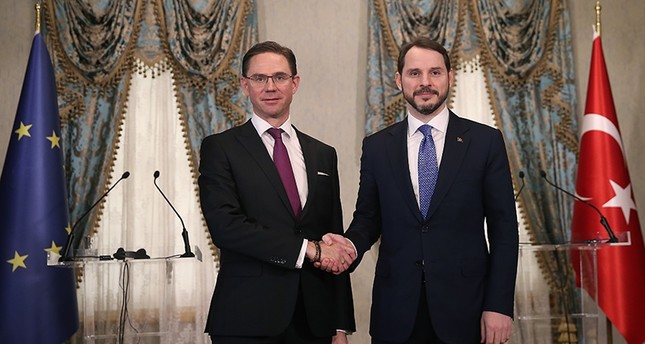 Economic cooperation between Turkey and the European Union has seen substantial growth in the last decade with increasing investments and bilateral trade volume.

While the bloc is Turkey's largest export destination, the country is currently the fifth largest importer of European goods. In addition to bilateral trade, Europe is also the biggest source of the foreign direct investment (FDI) Turkey attracts annually.

The high-level economic dialogue meeting was to make significant and comprehensive contributions to the cooperation with fruitful discussions between the business world and the public sector, Minister Albayrak said during his address at the meeting.

The minister drew attention to a globally rising concern, namely, trade wars, and emphasized that economic cooperation and dialogue, as well as free trade, would create synergy for all trading partners.

To elaborate on the growing ties, Minister Albayrak highlighted that the bilateral trade volume between Turkey and European countries has significantly increased in the last 15 years. "In light of the growing commercial ties, the third high-level economic dialogue meeting offers an important road map for the future of Turkey-EU relations," Albayrak said.

Minister Albayrak also underscored the urgency to update the customs union agreement Turkey inked with the EU in 1996 and stressed Turkey's expectations of the EU to make progress in visa liberalization and refugees.

"Turkey and EU ties have profound depth with the issues to tackle, including refugees, security, logistics, transportation infrastructure and energy. These are significant issues for the political, economic and social stability of both partners," Albayrak said.

European Commission Vice President Jyrki Katainen pointed out four important areas in which Turkey makes a significant contribution to stability in Europe. "The first is the issue of migration, whereby Turkey and EU sustained a strong partnership," he said.

Turkey and the EU signed a refugee deal in March 2016, to discourage irregular migration across the Aegean Sea by taking stricter measures against human traffickers and improving the conditions of the nearly 4 million refugees in Turkey.

The March 2016 deal employs a one-for-one formula under which failed asylum seekers in Europe are returned to Turkey, while Syrian refugees are resettled in EU states in a quota system. As another part of the deal, the EU said it would open two chapters in Ankara's EU accession negotiations, provide funding for refugees and grant visa-free travel to Turkish citizens to the Schengen zone. Ankara has criticized the EU for not holding to its promises and for not granting visa-free travel within the Schengen zone.

The second area of strong cooperation, Katainen said, is security as part of anti-terrorism efforts. "The third one is trade. Turkey is a party to the expanded market, which means contribution to economic welfare and employment. Lastly, the investments of Turkish companies in the EU and the investments of the EU companies in Turkey have led to the emergence of a more competitive system, creating more jobs and securing social justice in economic terms," he concluded.

EU Commission Vice President Katainen said Turkey has so far fulfilled 68 criteria out 72 that were required for visa liberalization. Two criteria remain challenging for Turkey-EU agreement on visa liberalization, including anti-terrorism laws and the recognition of the Greek Cypriot administration.

Katainen also stressed that for deeper cooperation between Turkey and EU, the modernization of the customs union is necessary. "We need to continue negotiations for the customs union upgrade, which will beneficial for both sides," he said.

In its Dec. 21, 2016, assessment, the European Commission proposed the modernization of the current deal, which only covers a limited range of industrial products, and excludes agriculture, public procurement and services. Highlighting that the upgrade of Turkey-EU trade relations forms an essential part of efforts made by Turkey and the EU to deepen relations in key areas of common interest, the commission reiterated its resolution to continue delivering on the commitments it has made as part of the deal with Ankara. "Modernizing the customs union to reflect current EU-Turkey trade relations would bring substantial economic benefits for both partners," the commission said in its proposal.

The project financing agreement for the largest-ever EU-Turkey financial assistance project was signed yesterday, according to the Delegation of the European Union to Turkey. The total project investment cost for the Halkalı-Kapıkule high-speed train line is estimated at around 1 billion euros. The EU will provide 275 million euros in grants, making it the single-largest EU investment project carried out in Turkey.

The EU commissioner for mobility and transport, Violeta Bulc, and Transport and Infrastructure Minister Cahit Turhan met in Istanbul to witness the signature of the bilateral project agreement during the meetings of the Turkey-EU high-level economic dialogue meeting.

The EU will finance the construction of a major railway line connecting the metropolitan area of Istanbul to the Turkish-Bulgarian border through an unprecedented grant of 275 million euros. This is part of the EU's investment portfolio in Turkey financed through the Instrument for Pre-Accession Assistance (IPA) funds for the period 2014-2020.

On the occasion of the signing ceremony, Bulc said: "With the signing of this flagship railway project, the EU and Turkey show once more that they can work hand in hand for the benefit of their people and for a joint and sustainable future. Turkey is our bridge between East and West. We are committed to achieving the full potential in our cooperation."

The new link will provide a safe, high-speed and clean connection for freight and passengers between the Halkalı station of Istanbul and the Bulgarian border crossing point at Kapıkule-Svelingrad station. The double-track electrified line will have 200 kilometers per hour design speed, enjoying the latest state-of-the-art signaling systems that are compatible with EU standards.

It is estimated that once built, the railway will benefit both consumers and producers for up to 1.6 billion euros. Businesses will enjoy more economical and reliable transport services, decreasing the barriers in a corridor of high importance for international import and export activities. Citizens will experience more accessible and safer mobility, particularly in and around the Istanbul urban area, while carbon emissions will decrease and the use of different modes of transport will be promoted, according to the EU delegation to Turkey.

It said this investment offers a natural extension of the core Trans-European Transport Networks and as such, it has been identified as a project of European interest within the framework of Chapter 21 of the Turkey-EU accession negotiations.

"In this context, Turkey pledged to start construction of further strategic railway connections to the Yavuz Sultan Selim Bridge over the Bosporus by 2029 at the latest. This will provide the missing rail connections and facilitate development of a larger trade corridor between the EU and Turkey and from Turkey onto the Middle East, the Caucasus and Central Asia," read the statement.

Transport is a key sector of cooperation for the EU and Turkey, as highlighted in the joint statement following the Turkey-EU High-Level Political Dialogue in November 2018 and in the High-Level Transport Dialogue in January of this year.

The Halkalı-Kapıkule High-Speed Train Project will connect Turkey's high-speed train network with Europe's. According to previous reports, the project is expected to be completed in 2022.

In his speech at the signing ceremony, Transport and Infrastructure Minister Turhan stated that the Halkalı-Kapıkule project consists of three parts, namely Halkalı-Ispartakule-Çerkezköy, Ispartakule-Çerkezköy and Çerkezköy-Kapıkule. The 155 kilometer-long Çerkezköy-Kapıkule part of the line will be covered by IPA funds. The remaining two parts will be built by Turkish Railways.

The tender for the consultation and construction of the project will be concluded at the end of March, and the contracts will be awarded in April.

Bulc stated that the Halaklı-Kapıkule project has received the largest grant from EU funds allocated for transportation infrastructure.

Share on Facebook Share on Twitter
Previous in Economy President Recep Tayyip Erdoğan on Wednesday said Turkey is resolute... Next in Economy The official reserves of the Central Bank of the Republic of Turkey...
DAILY SABAH RECOMMENDS