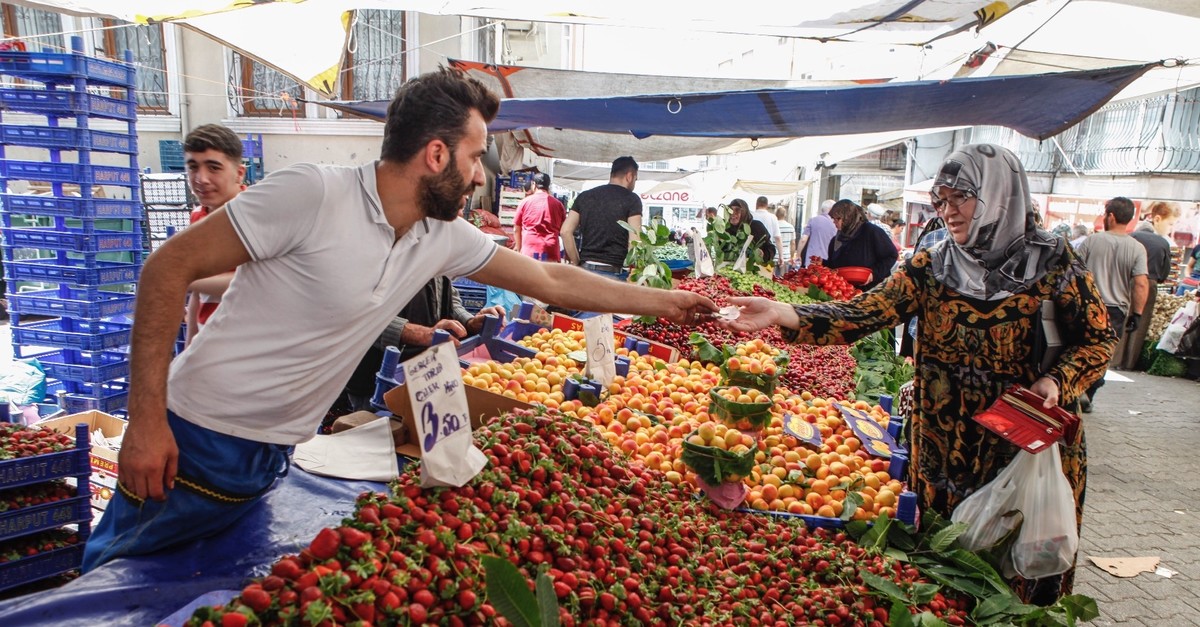 The slide in consumer prices became more visible in February with effective government measures and the continuously tight monetary policy of the central bank, sending inflation below the 20 percent threshold since September

For the first time since September, the consumer price index in Turkey fell below the 20 percent threshold with its sustainable tight monetary policy, fiscal discipline and the various measures the economy administration has taken to tame inflation. Turkey saw an annual rise of 19.67 percent in consumer prices in February, the Turkish Statistical Institute (TurkStat) announced yesterday. Last month, the annual inflation went down 0.68 percentage points from 20.35 percent in January.

The downward trend in the consumer prices, which became more visible in February figures, has been accomplished by the government's measures to control food prices and the central bank's tight monetary policy, strictly sustained since September when the bank increased the interest rates to 24 percent from the previous rate of 17.75 percent. Treasury and Finance Minister Berat Albayrak drew attention to the positive trend in the inflation figures on his official Twitter account. Albayrak tweeted that February figures echoed "the positive outcomes" of measures taken recently. "Particularly, the fall in core inflation – down from 19.02 to 18.12 in February – showed how the downward trend gradually becomes visible," Albayrak said. Core inflation means the hike in consumer prices excluding energy, food and nonalcoholic beverages, alcoholic beverages, tobacco and gold.

Albayrak said the significant drop in the producer price index also pointed out that the decline in inflation would proceed robustly. According to the official figures, domestic producer prices climbed 29.59 percent year-on-year in February, down from January's annual figure of 32.93 percent. "We are quite optimistic about the inflation figures ahead," he said and continued, "Beginning this summer, we will see noticeable price drops in all items by leaving behind seasonal negativities and taking structural actions on food [prices] side in the second quarter this year."

Albayrak also said that Turkey would end 2019 with better performance and reach single-digit inflation figures sooner than expected. In Turkey's new economic program (NEP) announced in September 2018, the country's inflation rate target is 15.9 percent this year, 9.8 percent next year and 6.0 percent in 2021.

In January, the Central Bank of Turkey revised its year-end inflation forecast, dropping to 14.6 percent from 15.2 percent. Over the last decade, annual inflation saw its lowest level at 3.99 percent in March 2011, while it peaked at 25.24 percent in October 2018.

Due to economic turbulence exacerbated by geopolitical tensions and strained relations with the U.S. in August and September that sent the Turkish lira to historic lows, Turkey's inflation had a run-up trend and peaked in October with 25.24 percent, while it was recorded at 24.52 percent in September.

Commenting on the inflation data, QNB Finansinvest Chief Economist Burak Kanlı pointed out that the monthly inflation figure of 0.16 percent was the second-lowest February inflation recorded in the last decade.

The steep decline in domestic demand and the spiking Turkish lira sustained the downward trend in the prices of goods, Kanlı emphasized. "While the improvement in the prices of the unprocessed food remained relatively limited, more visible amelioration in the pricing behaviors of the unprocessed food items will be observed in March," he told Anadolu Agency (AA). The inflation is likely to lower 16 percent as of June, he added.

The elimination of unpropitious weather conditions creating unfavorable circumstances for agricultural activity will be less effective in the supply-demand balance as of March, Kanlı explained. He also stressed that the March 6 meeting of the Central Bank of Republic of Turkey will not be affected by the February inflation data, and the bank will continue its tight monetary policy.

Halk Yatırım Research Director Banu Kıvci Tokalı drew attention to the impact of the municipality-run sales points on unprocessed food, the prices of which rose by 2.43 percent on a monthly basis and 1.36 percent on an annual basis. Last year in February, the prices of unprocessed food surged 2.4 percent. Therefore, direct sales points run by municipalities in Istanbul and Ankara - a practice launched by the government initiative to tame the food inflation that hit nearly 31 percent in January - have limited the continuous rise in food prices.