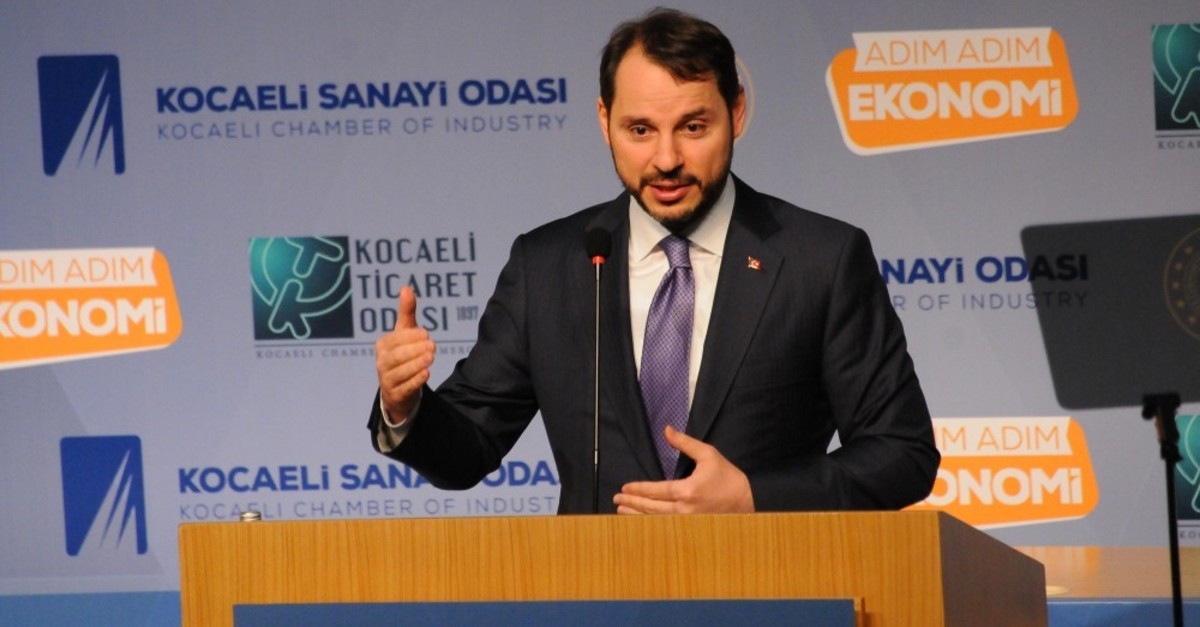 Treasury and Finance Minister Berat Albayrak addressed the businesspeople in Kocaeli and explained the recent improvements in the Turish economy, March 6, 2019.
by Daily Sabah Mar 07, 2019 12:08 am

The balancing period in the Turkish economy continues in accordance with the projections of the new economic program, as can be seen via the falling inflation rate and the narrowing of current account deficit

Turkey has covered considerable distance within the framework of the balancing process projected in the New Economic Program (NEP), which was announced late September last year. The country has seen major improvements in both the current account deficit and the inflation rate, one of the most important legs of the balancing process the Turkish economy has been going through over the recent period. New strategies, policies, a determined stance and a series of measures the government implemented have found a positive response, increased confidence and brought stabilization in the Turkish markets following the turbulent period in the second half of 2018.

"The annual current account deficit, which peaked in May last year at $58.1 billion, dropped to a level of $27.6 billion by the end of 2018, below the target specified in the NEP," Treasury and Finance Minister Berat Albayrak said in his address at an event in the industrial province of Kocaeli, where he met with local businessmen.

Having recorded a gradual increase early on, Turkey's current account deficit last year fell to a 10-year low, declining by 8.8 percent year-on-year to reach $27.6 billion, according to the Central Bank of Republic of Turkey (CBRT). The figure, showing improvement from a nearly $47.5 billion deficit in 2017, was the lowest since 2009.

On the other hand, inflation in Turkey fell below the 20 percent threshold for the first time since September. Sustainable tight monetary policy, fiscal discipline and other measures such as direct sale points that were launched by local municipalities in Istanbul and Ankara, as well as other provinces later on, to counter soaring consumer foodstuff prices, offering agricultural products to average consumers at affordable prices, had a major contribution to the improvement in the inflation rate.

"An important leg in the balancing process we have been experiencing in our economy in the recent period is in the internal balancing, namely the success achieved in inflation. We have seen the success of the direct sale points. Annual inflation has dropped to the lowest level of the last six months. The 2019 inflation will realize well below the target," Albayrak said, commenting on the fall in inflation.

The downward trend in consumer prices, which became more visible in February figures, has been accomplished by the government's measures to control food prices and the central bank's tight monetary policy, strictly sustained since September when the bank increased the interest rates to 24 percent from the previous rate of 17.75 percent.

"The elimination of seasonal impacts and structural reforms to be implemented in order to tame food prices will significantly yield a drop in the inflation figures in the second half of the year. We will close 2019 with an inflation figure lower than the forecasts," Albayrak said.

In January, the CBRT revised its year-end inflation forecast, dropping to 14.6 percent from 15.2 percent. Over the last decade, annual inflation saw its lowest level at 3.99 percent in March 2011, while it peaked at 25.24 percent in October 2018.

The fall in core inflation to 18.12 percent, and the visible drop in the producer price index, has been recognized by all stakeholders, the minister added.

Minister Albayrak stressed that the economy administration has put great efforts into fortifying the economic infrastructure and annihilate the impact of developments in August and September. He also announced that the Treasury launched two support packages and said that following the first TL 20 billion package for small and medium-sized enterprises (SMEs), a second SME support package worth TL 25 billion was announced last week.