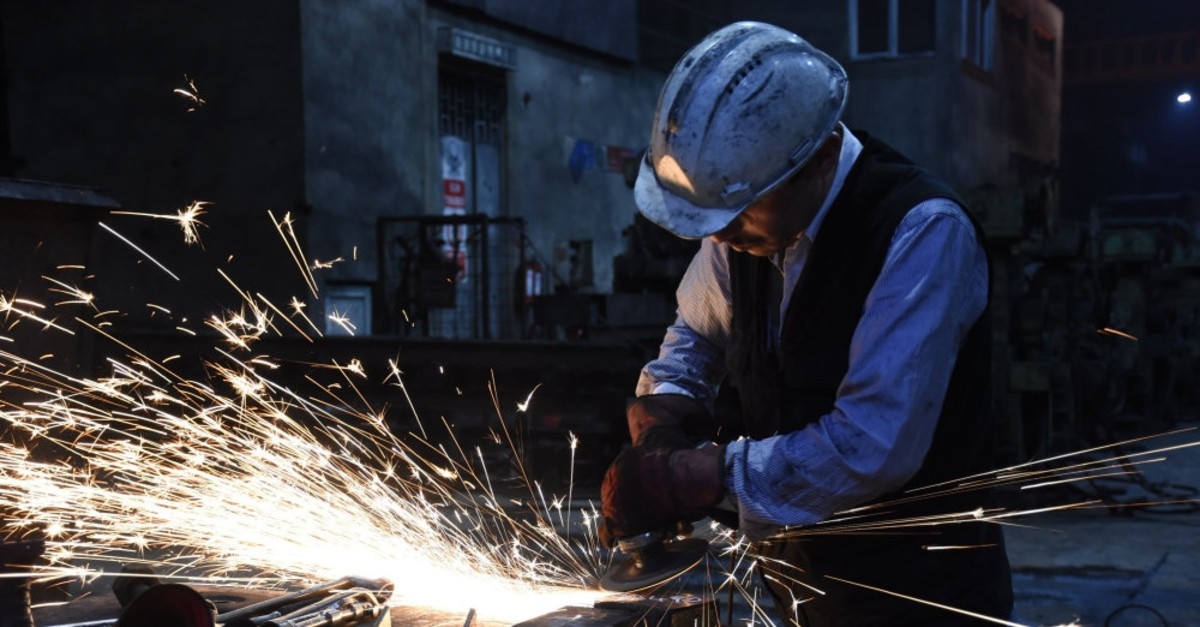 The narrowing in Turkey's economy in the last quarter of 2018 reflects a temporary situation, according to Treasury and Finance Minister Albayrak, who said the worst has been left behind and a rapid recovery trend has begun

Turkey's economy grew by 2.6 percent in terms of real gross domestic product (GDP) in 2018 compared to the previous year and shrank by 3 percent year-on-year in the last quarter of last year, the Turkish Statistical Institute (TurkStat) announced yesterday. In current prices, Turkey's GDP increased by 19.1 percent in 2018 compared to the previous year, amounting to TL 3.7 trillion, TurkStat said. Turkey has left the worst behind on the road to growth this year, Treasury and Finance Minister Berat Albayrak said in his evaluation of growth figures over his Twitter account. Albayrak stressed that the actual data for 2019 shows the economy has started rapid recovery and the slowdown in growth reflects a temporary situation. The negative 3 percent growth rate in the last quarter of 2018 occurred as expected, he said. "In this period, in which we ensured internal and external balancing together, we initiated a decline in current account deficit and inflation. The worst in economic activities is over. The worst expectations about growth did not occur," the minister added. The minister also said that exports and tourism revenues will be the main engines of growth in 2019.

Turkey has covered considerable distance within the scope of the balancing process the economy has been going through and that is projected in the New Economic Program (NEP), which was announced late September last year.

New strategies, policies, a determined stance and a series of measures the government implemented have found a positive response, increased confidence and brought stabilization in the Turkish markets following the turbulent period in the second half of 2018.

Albayrak remarked that despite the most serious speculative attack in history and the downward trend in the global economy, a situation similar to the one in the years 2001 and 2008 did not occur, adding that the process was successfully overcome in a very short time.

"The fact that the net external demand made a 9.7 percent positive contribution to growth despite the narrowing in the last quarter is an important sign that the balancing process continues as foreseen," Albayrak noted.

He further said they fully believe that the growth will continue in 2019 as "we foresaw in the NEP thanks to the positive developments in the financial markets in the recent period, the downward trend in inflation, improvements in leading indicators, steps taken in access to financing and the mobilization of employment."

Turkey aims to reach an economic growth rate of 2.3 percent this year, 3.5 percent in 2020 and 5 percent by 2021 under its new economic program announced last September. Stressing that Turkey is going through a strong coordination period in economic policies, the minister further noted, "As of April, we will strengthen the process further with the steps we will take on the structural side."

Albayrak also indicated that they will reduce the current account deficit within the scope of the NEP, adding that they will resolutely continue to implement policies that will enhance welfare for the people.

Last week, a group of 15 economists interviewed by Anadolu Agency (AA) forecast a 2.5-percent annual growth for the Turkish economy. Their forecasts hovered between 1.8 percent, the lowest estimate, to 3.3 percent.

The total value added of the services sector (wholesale and retail trade, transport, storage, accommodation and food service activities) surged by 5.6 percent in 2018 year-on-year, according to TurkStat.

"According to the previous year's chain-linked volume index, final consumption expenditure by the government increased by 3.6 percent and gross fixed capital formation decreased by 1.7 percent," it added.

In the last quarter of 2018, the country's economy shrank 3 percent year-on-year, while the GDP growth rate was 1.8 percent in the July-September period. "Seasonally and calendar adjusted GDP decreased by 2.4 percent [Q4] compared with the previous quarter [Q3]," the institute noted.

In their evaluations of the growth figures, Turkish businesspeople have said they expect positive developments throughout this year.

"Turkey continues to grow. Although there are problems, we are optimistic about 2019," Nail Olpak, head of Turkey's Foreign Economic Relations Board (DEİK), was quoted as saying by AA.

He indicated in a written statement that despite narrowing in the last quarter, the positive contribution of net external demand to growth percent was important. Olpak also noted that the decline in current account deficit and inflation thanks to the government measures were a sign of recovery in 2019. "The 3 percent narrowing in the last quarter was a corollary of balancing period in the [Turkish] economy," he added.

On the other hand, Turkish Exporters' Assembly (TİM) Chairman İsmail Gülle said a growth rate of 2.6 percent last year despite attacks on foreign currencies showed that the country had a solid base.

"In our economy, we will reach again strong growth rates due to the balancing period," AA cited Gülle as saying.

Abdurrahman Kaan, chairman of the Independent Industrialist's and Businessmen's Association (MÜSİAD), said the Turkish economy will continue to grow in 2019 "slowly but steadily."

"We believe that our country would enter a quick development process due to the new economy system's dynamic structure and past experiences," Kaan added.

Also speaking of the developments, Turkey Macro View Consulting Managing Director İnanç Sözer said that the Turkish economy shrank in the last quarter of 2018 in line with market expectations.

Sözer stated that he predicts that the annual growth could remain negative in the first quarter of 2019, expressing that growth could take a positive trend in the second quarter in line with the government's measures taken since last September and the central bank's tight monetary policy.

He emphasized that economic growth will remain positive in 2019 in a general sense, however, this should be supported by fiscal and monetary policies. Pointing out that the improvement of investors' perception is indispensable in terms of economic activities, Sözer stated that the worst is seen in terms of financial markets and that improvement in the real economy will take some time.