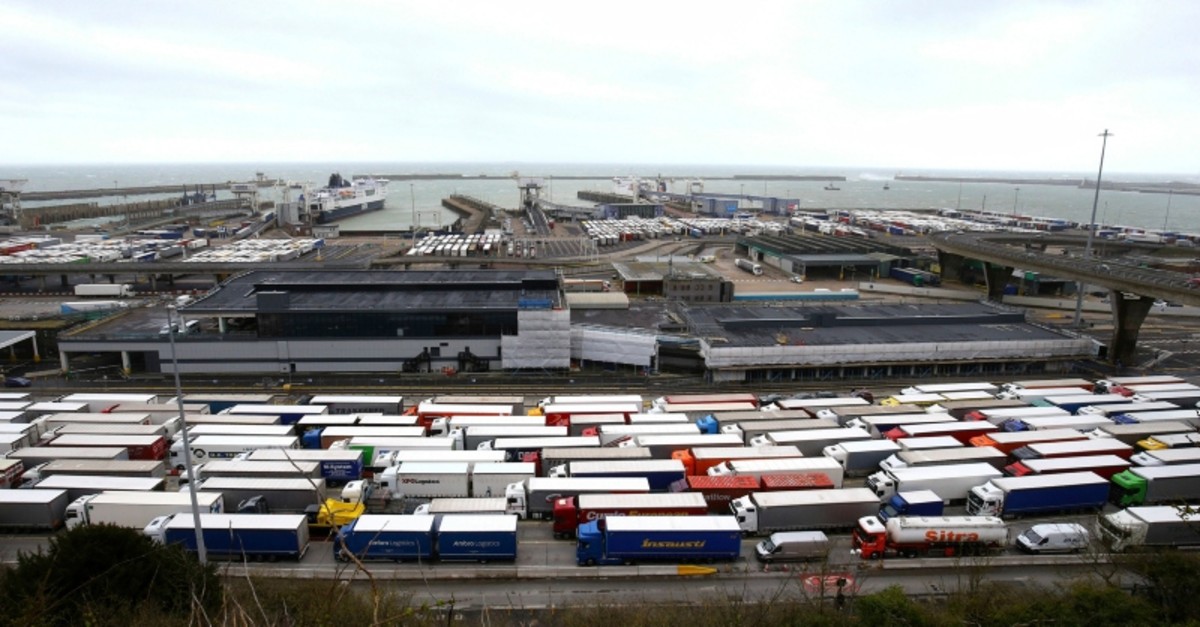 Lorries queue at the entrance to the Port of Dover ferry terminal in southern England, as bad weather causes heavy seas and delays to the cross Channel ferry, Tuesday, March 12, 2019. (PA via AP)
by Mar 13, 2019 12:00 am

The United Kingdom will slash import tariffs in case of a no-deal Brexit and will not apply customs checks on the border with Ireland, the government said Wednesday.

Under the new system, which would come into force if Britain leaves the EU on March 29 without an agreement, tariffs would be retained but reduced for some agricultural products to protect British producers.

The new regime is aimed at avoiding a jump in prices of EU imports for consumers and a disruption of supply chains, and is intended to be temporary for up to 12 months pending negotiations on a more permanent system.

"If we leave without a deal, we will set the majority of our import tariffs to zero, whilst maintaining tariffs for the most sensitive industries," Trade Policy Minister George Hollingbery said.

"This balanced approach will help to support British jobs and avoid potential price spikes that would hit the poorest households the hardest," he said.

Tariffs on beef, lamb, pork, poultry and some dairy would be reduced but retained in most cases.

In the auto sector, the government said carmakers reliant on EU supply chains would not face additional tariffs for car parts imported from the EU but tariffs would apply on imported cars.

The new regime would not apply to countries with which Britain already has a free trade agreement and to around 70 developing countries that have preferential access to the British market.

The government said it would not apply a tariff regime and customs border on goods transiting across the land border from Ireland to Northern Ireland but admitted that this created a "potential for exploitation" if those goods are then transported across the sea to mainland Britain for sale.

"This regime is only temporary as we recognise that there are challenges associated with this approach, including the unmonitored flow of goods into the U.K. and the potential for exploitation of any new system," the government said in a statement.

"The government is committed to entering into discussions with the European Commission and the Irish government as a matter of urgency," it said.