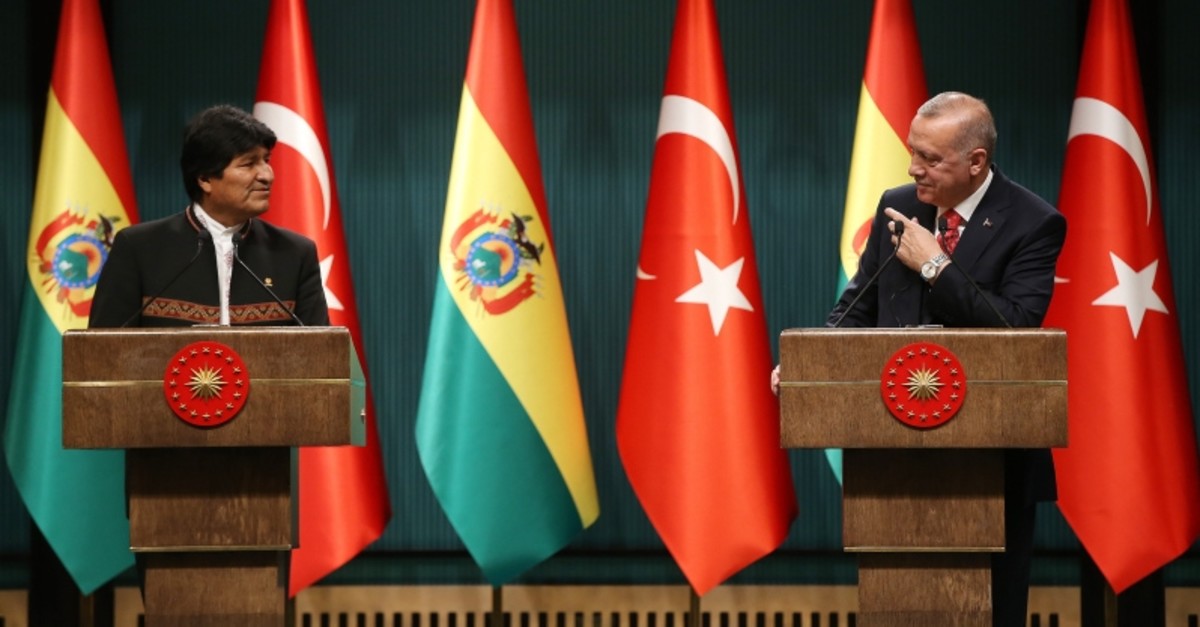 During the first-ever presidential visit from Bolivia to Turkey, the two countries expressed the common will to further deepen bilateral ties by capitalizing on growing bilateral trade and expanding cooperation into defense, energy and agriculture

Over the last two decades, Turkey has pursued an active policy to reinforce its relations with the Latin American and Caribbean (LAC) countries, including Bolivia. The first-ever presidential visit from the Latin American country to Turkey, ahead of 70th anniversary of the establishment of diplomatic ties next year, yesterday marked a turning point for the bilateral ties.

In a joint press conference held in Ankara yesterday, President Recep Tayyip Erdoğan and Bolivian President Evo Morales expressed the common will to capitalize on the growing economic and political rapport at a time when the world is facing important transformations, with Latin American not remaining uneffected.

Turkey's exports to Bolivia were recorded at $21 million while imports stood at $92 million, according to data from the Turkish Statistical Institute (TurkStat).

Turkish exports mainly included cookies and waffles worth around $2.4 million as well as fiber-optic cables and electrical conductors worth $2 million. The exports of fridges and deep-freezers contributed $1.3 million to Turkish exports to Bolivia last year. Jewelry equipment and components made up $89.6 million of total imports from Bolivia.

Erdoğan underscored that the current figures are not enough to yield benefits for both countries and underlined the necessity to find new ways to expand the bilateral trade. "Today, we have discussed the possible ways to increase bilateral investments in defense and energy," Erdoğan said and noted that the first meeting of the joint economic commission will be held next year. The president also said he is planning to visit Bolivia with a delegation of businesspeople.

"I believe that we can accomplish investment projects in thermal power plants and solar power plants with the joint efforts of our businesspeople," he remarked.

Erdoğan also recalled the humanitarian and welfare projects carried out by the Turkish Cooperation and Coordination Agency (TİKA) in the country. Last year, TİKA provided 18 light machinery packages to the quinoa manufacturers associations in the Quechua and Aymara region of south Bolivia – where the country's poorest communities live – to raise the production process to the export level.

Bolivian President Morales strongly expressed his appreciation for TİKA's contribution to the development of his country and underscored that quinoa manufacturers helped Bolivia commercialize agricultural produce. Morales also recalled the ambulances and other health equipment TİKA provided for the Bolivian people and said that the supplies contributed to the improvement of health services in the country. Thanks to Turkey's efforts a kidney transplant hospital was also established in Bolivia.

In reference to defense cooperation, Morales said, "Bolivia is willing to cooperate with Turkey in defense because we are very much in need of defense reinforcement in our fight against smuggling and trafficking."

The Economic and Commercial Cooperation Agreement between Turkey and Bolivia was signed in 2011 and took effect in 2013. Moreover, a visa exemption agreement has also been in effect since 2001. These agreements have enabled bilateral economic and political relations to significantly grow in recent years.

The first free trade agreement (FTA) in the region was signed with Chile in 2009 and entered into force on March 1, 2011. Negotiations for an FTA with Ecuador, Colombia, Mexico and Peru are underway. In addition to the LAC countries, Turkey aims to conclude FTAs with important regional organizations such as the Caribbean Community (CARICOM), the Southern Common Market (MERCOSUR) and the Pacific Alliance.

The geographical distance that impedes Turkish and Bolivian businesspeople from traveling frequently, along with high freight rates, are logistical disadvantages to increase competition with other regional countries.

Rich in natural resources, Bolivia has stannum, zinc, silver and gold reserves in addition to natural gas and oil. The country contains more than 60 percent of the global lithium reserves, a strategic mineral used in electric batteries. Its natural gas exports account for more than 50 percent of total exports. Additionally, gas agreements with Brazil and Argentina have also led to a surge in natural gas production and exports, having boosted the economic development of the country. Registering a 4.2 percent growth in 2017, the Latin American country grew by 4.3 percent last year.

In his address, President Erdoğan hailed Bolivia's support for Jerusalem's status, protecting civilians in Palestine and praised the country's approach to the Golan Heights. "Turkey and Bolivia share a common stance in many global matters," he said and continued, "We are worried about the growing alt-right and anti-Islamic tendencies across the world."

"I hereby would like to express my gratitude for Bolivia's contribution to protecting the status of Jerusalem and appreciate their approach to the issue of the Golan Heights," Erdoğan said.

In late March, U.S. President Donald Trump signed a decree at the start of a meeting with Israeli Prime Minister Benjamin Netanyahu saying the U.S. recognizes Israeli sovereignty over the Golan Heights, territory that Israel seized from Syria in the 1967 Middle East war. This move by the U.S. administration sparked outrage from the countries around the world and a majority of U.N. Security Council members later stressed the importance of upholding international law regarding the occupied Golan Heights, in the face of the unilateral move by the United States to recognize Israel's sovereignty over them.

Both Erdoğan and Morales also stressed their opinions on the developments in Venezuela and noted that Turkey and Bolivia share the same view, expressing that no country has the right to intervene in the democratic process of another nation.

"No one can disrupt the democratic process in a country, trying to topple an elected government by engaging in efforts to replace the elected president with someone else, almost like appointing a state governor," Erdoğan said.

In the same vein, Bolivian President Morales also expressed, "We are in a period of integration, we are not accepting the undemocratic attempts to topple the Venezuelan government," he said.