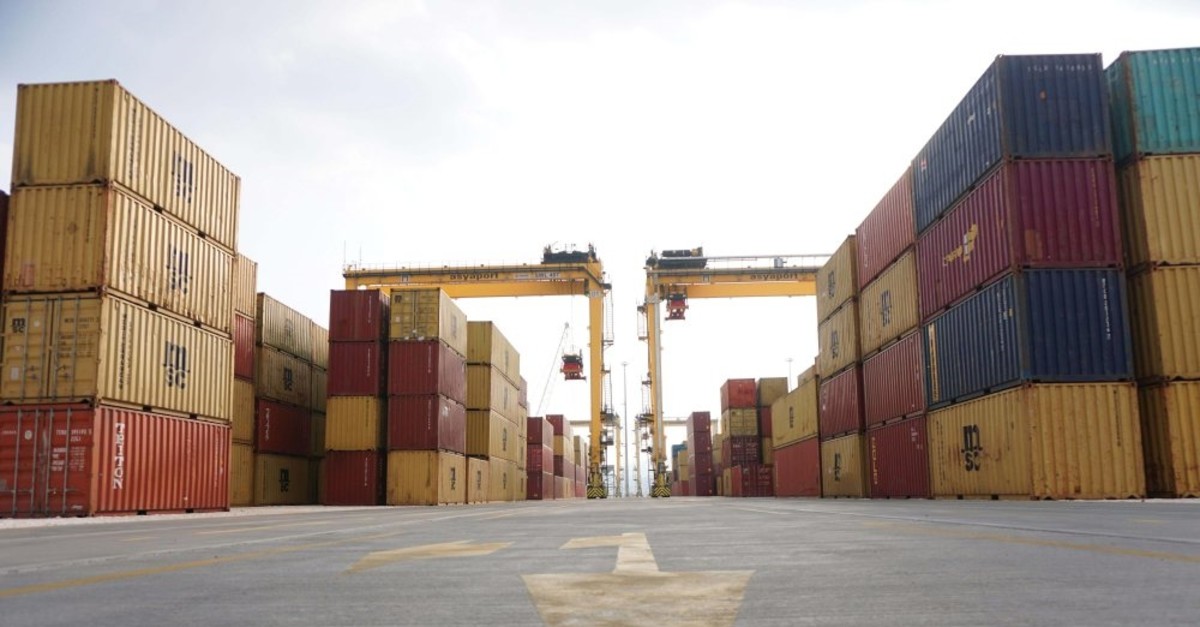 Asyaport, one of the largest 10 ports in Europe started operating in Turkey's Tekirdau011f province on July 8, 2018 and hosts giant vessels carrying export and import products.
by Daily Sabah Apr 12, 2019 12:12 am

The new economic program displays the will and readiness of the government to address economic challenges in Turkey along with the concerns of actors, representatives of the business world have said

Representatives of Turkey's business circles have voiced their support for the new reform package, a road map for Turkey's economy consisting of solutions for the most urgent issues businesspeople have been raising for a while. The representatives also highlighted the package's importance, demonstrating political commitment to addressing some of the primary concerns of the Turkish economy. The new action plan, unveiled Wednesday by the Treasury and Finance Minister Berat Albayrak, focuses on structural reforms to bring in measures related to financial structure, inflation, the tax regime and agricultural production among others while ensuring sustainable growth and development with increased exports, tourism revenues and logistical operations.

This transformation and reform process will decisively continue over a four-and-a-half-year period without elections, Albayrak said during a news conference in capital Ankara. He said the New Economic Program (NEP), launched in September 2018, laid the groundwork for the implementation of necessary actions to ensure compliance with free market rules, tight fiscal policy, sustainable growth, a fairer tax regime and coordination of monetary policy with the fiscal policy. "We are now going to achieve goals and transformations with this reform program," Albayrak said.

Nilüfer Bulut, head of the Turkish Businesswomen's Association (TİKAD), said the structural reform package is of great importance from the aspect of the will the government has showed in the past and will show in the future to address the main problems in the Turkish economy.

For instance, Bulut emphasized that the National Unity Project in Agriculture will be one of the promising reforms to keep one of the primary concerns in the economy permanently under control, namely inflation, which peaked after high volatility in the exchange rates in August last year.

The comprehensive strategy will be unveiled by the Agriculture and Forestry Ministry next month and will aim at fighting inflation in food prices.

Inflationary pressures have been fueled by high food prices and seasonal fluctuations. Inflation, which soared as high as 25 percent in October 2018 and retracted to 19.71 percent in March, will be one of the main issues the government will focus on and will carry out structural reforms in agricultural policy.

With the goal of reducing inflation, a greenhouse corporation will be established to work as a balancing element in the fresh fruit and vegetable sector. Initially, a technological greenhouse will be built on some 2,000 hectares by this corporation in 2019 and will meet 25 percent of the country's total greenhouse production in the long run. "On the other hand, steps to be taken in the financial sector, a lifeline of the real sector, and regulations to be made toward strengthening the banking and insurance sectors are seen as concrete steps in the name of overcoming the challenges Turkey has encountered over the recent period," said Bulut.

The treasury and finance minister remarked that the financial sector prioritized a new set of structural reforms for this year. "Strengthening state-run lenders' capital structure will be our first step," he said, adding that the Treasury will issue TL 28 billion in government debt securities to make state banks' balance sheets more robust.

Under the leadership of the Banks Association of Turkey (TBB), the balance sheet of private banks will be strengthened by relieving them of troubled assets through a a debt-equity swap. Dividend and bonus payments would be limited during an economic rebalancing period.

A venture capital fund for the energy industry and a real estate fund will be established since these two sectors have the highest ratio of troubled assets and a number of companies have already resorted to debt restructuring. The new finance model will allow banks to run funds with local and foreign investors.

In order to increase savings, an effective and healthy saving system, starting from state to individuals, will be established to eliminate soft spots in the economy. A more progressive tax structure will be ensured, while indirect taxes will be decreased and direct taxes will be increased. The new tax regime will primarily aim to create employment.

In a written statement, Ankara Chamber of Commerce (ATO) Chairman Gürsel Baran said the new economic program was established on three pillars, namely discipline, balancing and change, pointing to the importance that the period of change will be realized with structural reforms.

Baran noted the need for reforms in production and taxation areas, expressing his satisfaction with the fact that corporate tax will be gradually reduced. The ATO chairman mentioned a few steps, including establishing a reliable tax system, strengthening of the banking system, putting forward domestic products by localizing industrial production, providing export-weighted growth by implementing the export master plan and making Turkey a logistics center by turning its geographical location into opportunity. "It is a straight ahead, applicable and effective package that includes prescriptions to the structural problems. Structural transformation steps will improve and strengthen our economy," he said.

The Turkish Industry and Business Association (TÜSİAD) said they hope that the reform program will contribute to sustainable growth and to Turkey's global competitiveness. The business world is committed to supporting policies that contribute to these goals. In a statement, the association said Turkey urgently needs reforms that, among others, strengthen social development and the investment environment, suggesting that these reforms will also improve economic productivity, entrepreneurship, creativity and innovation.

In his evaluation, Istanbul Chamber of Commerce (İTO) Chairman Şekib Avdagiç said the package clearly puts forth the will of the economic administration to manage Turkey's transformation process with intelligent reform.

Avdagiç suggested that the program meets the expectations of the real sector and is designed to strengthen the foundations of the economy. Noting that a very important first step has been taken and reform titles have been determined, he said now these should be implemented in a stable and effective way.

Istanbul Chamber of Industry (İSO) head Erdal Bahçivan, on the other hand, said that the new package has given them hope in terms of new steps toward Turkey's manufacturing economy they have always backed.

Yaşar Doğan, head of the All Industrialists and Businessmen Association (TÜMSİAD), pointed to the 4.5 year election-free period ahead now that the municipal elections are over, indicating that they have named this new period as the "economic development process." "The announced reform package shows the route of the Turkish economy in 2019 and consists of arguments that meet the expectations of the business world for solutions," said Doğan.